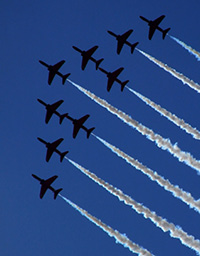 Minister of Industry Christian Paradis says the future of the Canadian aerospace industry will be one of the driving factors of our national economy for many years to come, with many technological advancements taking place right here in our own backyard.

Paradis made the statements while speaking on a teleconference from Farnborough, England at the prestigious Farnborough International Airshow, which was attended by many high-end companies from around the world and is widely considered to be the flagship international airshow event in the aviation sector with about 1,500 exhibitors from 45 countries and more than 120,000 visitors.  More than 130 Canadian companies attended the event.  In alternate years, Paris holds the air show.

“The Canadian aerospace industry is a cornerstone of our economy, driving economic growth and creating jobs and long-term prosperity across the country” says Minister Paradis. “That’s why we are continuously working to set the right conditions for Canadian companies to thrive in the fiercely competitive global market.”

The Minister officially opened the Canadian Pavilion by welcoming domestic industry leaders and highlighting federal support for aerospace. He also met with key aerospace stakeholders to promote the strength and innovative capabilities of the Canadian aerospace sector.

“This trade show brings together the best and brightest in the global aerospace industry,” Paradis remarks.  “Thanks to the innovation and talent of our companies, Canada has earned its place in that exclusive group.”

Within Canada, Ontario’s aerospace sector continues to grow, now supporting 22,000 direct jobs and contributing about $6.5 billion to the economy each year.

producing 60 per cent of the world’s large commercial landing gear.

providing Ontario-made aerospace parts for virtually every passenger aircraft in the world.

more than 100 Ontario companies are working on the next generation of aircraft including the A380, A350, Boeing 787 and the Bombardier C-Series.