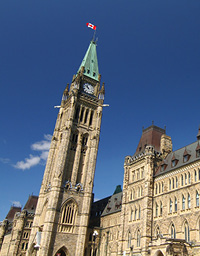 On May 4, the Canadian American Business Council (CABC), a non-profit, issues-oriented organization dedicated to elevating the private sector perspective on issues that affect Canada and the United States, held a panel discussion to analyze the election results and discuss the implications on Canadian, U.S. relations.

The 2011 Canadian federal election on May 2 was labeled an “election of firsts” by Herb Metcalfe of the Capital Hill Group during an event hosted by the Canada Institute. The overarching consensus of the panel was that a majority government will be advantageous for both countries, primarily because it will provide a more stable negotiating platform and will ostensibly free up the Harper government from some opposition. Also agreed upon was that the most pressing bilateral issues are border protection and harmonization of trade.

“The fact that we are not going to have another election for four to five years is a good thing because it means we can move forward on the issues of importance,” says Jane Moffat, Executive Director at CABC.

“We have many people at the event from our membership who voiced during the discussion their views that they hope [the majority government] will mean a concerted effort to make business across the border easier to do,” Moffat says. “[Prime Minister Harper] has a great relation with the president and that will continue to be solid and we can move forward on issues.

“Canadians did decide that they like the message of stability, and gave Harper marks for economic stability,” says Tim Powers, Vice-President, Summa Strategies Canada.

As Powers sees it, this election has propelled the Harper government into a whole new phase. “Harper has been campaigning incessantly since 2002. He now has the luxury of not having to fight an immediate political campaign for the first time since he’s been leader of the Conservative Party [of Canada].”

At the March 25 CUSBA Luncheon, Canadian Chamber of Commerce President and CEO, the Hon. Perrin Beatty, told the crowd, “8 million jobs in the U.S. and 3 million in Canada depend upon the success of our trade relationship. And that success is built upon the free flow of goods and services across the U.S.-Canada border.

“An inefficient border has serious economic costs, especially given the integrated nature of our supply chains,” Perrin continued. “For example, North American cars can cross the border several times during the various phases of production. Each time that car has to go through customs and security clearance. Not to mention delays. This is compared to a ship full of foreign manufactured cars which only has to bear these burdens once. We are effectively discriminating against our own industrial base as a result of bad public policy. It will also improve the predictability of the border in terms of wait times, inspections, fees, hours of service and standards. Finally, better management of the border supports economic growth.”

Border security has been on Harper’s agenda for some time. On February 4, U.S. President Barack Obama and Canadian Prime Minister Stephen Harper created a “North American perimeter,” and a United States-Canada Regulatory Cooperation Council, composed of senior regulatory, trade, and foreign affairs officials from both governments.

During the press conference, Obama praised the mandate as a way for both countries “to manage shared responsibilities across and ‘beyond the border’,” one that “builds on the remarkable security partnership between Canada and the United States that has helped keep our borders open to legitimate trade and travellers, and closed to criminal and terrorist elements.”

In this post 9/11 world, both governments have to work out how our shared borders will address concerns of security and fluid trade. Both countries must hold coherent position on their priorities and work swiftly and cohesively to get these agendas pushed through. With a majority government, hopefully progress will not be gridlocked.