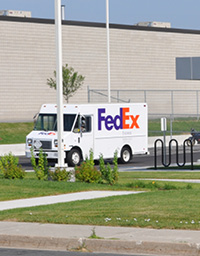 A mere four days after Markham, Ontario officially changed its municipal status from a town to a city – appropriately on Canada Day, July 1 –
FedEx Express Canada opened its state-of-the-art service centre in the suburban city of 305,000 in the northern section of the Greater Toronto Area.

The multi-million dollar facility was 18 months in the planning stages and comes equipped with just over 89,000 square feet, 150 employees and a fleet of 80 trucks that roll out one by one early each morning on their delivery routes.  The building is ideally situated just north of Canada’s largest city, making it well suited to accommodate about 400 company headquarters and almost 900 hi-tech and life sciences companies in the area.

In speaking with several FedEx Express Canada executives during the grand opening and ribbon-cutting ceremony, it was easy to see and feel the excitement and enthusiasm throughout the building.

“This facility is designed to meet the needs of today and the opportunities of tomorrow with enthusiasm and service excellence,” smiled Lisa Lisson, President, FedEx Express Canada.

“It’s fitting that FedEx is choosing to invest in Markham and locate their new operation here,” Scarpitti noted.  “We’re in the fourth largest office cluster in Canada; we offer the lowest industrial tax rate and second-lowest commercial rate in the GTA, and we have an extremely talented and multilingual workforce.”

This marks the fourth recent facility to be opened in Canada along with St. John’s NL, Cambridge, ON and Surrey, BC to go along with last year’s air fleet conversion to Boeing 757s.  FedEx Express Canada employs 6,000 people in more than 70 locations coast-to-coast.  There are more than 300,000 employs worldwide, with the international headquarters based out of Memphis, Tennessee where Fred Smith founded the company in 1971.

“When it comes to the Canadian strategy and how we run the company, we have complete autonomy,” Lisson confirms.  “I report in to a gentleman in the United States and he oversees FedEx globally.  But all of our technology is done down in the U.S. and we leverage a lot of it rather than each region creating something on their own.  We benefit from the excellent IT group we have down there.”

Lisson has been with the company her entire working career, more than 20 years – and she says the advent on the Internet and online ordering has definitely redefined the way business is handled.

“It’s quite fascinating,” she said.  “What we’ve seen in the last five to 10 years is that we actually have some customers right now that the only way you can order their goods is online – you can’t go to a store.  The only way you can get access is online.  We have technology now that allows our shipping application to be embedded into our customers’ websites.”

That means when you are online and you’re picking your goods and services, you’ve got a whole host of FedEx services for overnighting, two or five days and are integrated in.

“eCommerce has also impacted us because what we’re seeing is more and more consumers going online versus going to retail stores because my residential deliveries has increased double digits year over year,” Lisson continued.

Living up to our reputation as going about things with polite, quite conservatism, it took some time before Canadians were willing to embrace the whole online purchasing idea, preferring instead to take a wait-and-see attitude, watching how the new communications medium worked south of the border, before willing to take the plunge.

“But Canadians weren’t big on ordering from catalogues back in the day and we eCommerce started exploding in the U.S. we kind of wanted to wait back and see what was going on, but now we’re seeing more and more Canadians going online and we certainly did this last holiday season in December,” stated Lisson.

The new facility Markham facility includes a large customer service area and ample parking for employees and those visiting.  Vehicles dispatched from the new location will coordinate pickups and deliveries across the Greater Toronto Area and Central Ontario.