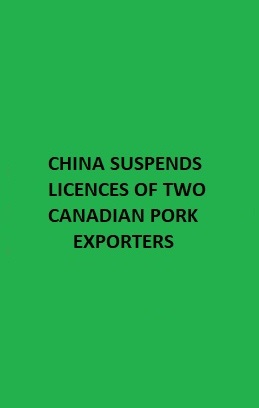 CBJ — China has lashed out against Canada for a second time and is now suspending Canadian permits of two Canadian pork exporters.

Both Canadian pork exporters are based in Quebec.

A spokesperson with the Canadian Pork Council also said it was aware of the suspensions.

It seems as if the suspensions are related to incorrect labelling on some import certificates and is a problem that should be rectified fairly quickly.

Earlier, Bibeau’s office said the Canadian Food Inspection Agency (CFIA) was working with industry earlier this week to sort out language and format issues on some export certificates used to export meat to China.