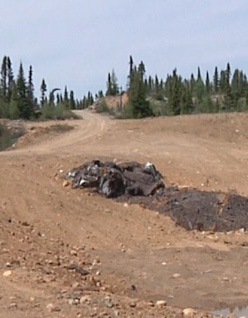 Global graphite consumption has increased from 600,000 tonnes in 2000 to 1.2 million tonnes in 2011 and market watchers forecast demand growth hikes of five to 10 per cent in the years ahead. As anticipation mounts and end-users worldwide from the energy industries to construction and high profile new technologies seek out alternative sources of supply from globally dominant China—which accounts for around 82 per cent of the strategic metal hitting markets today—few emerging producers are more keenly watched than Quebec’s Focus Metals Inc. (TSX-V: FMS) (OTCQX: FCSMF)(FRANKFURT: FKC) (“Focus”).

As the owner of the world’s highest-grade (16 per cent in situ) technology graphite resource at its Lac Knife project near Fermont, northern Quebec—comprising an NI43-101 compliant 8.1 million tons to date (December 2011) and huge potential for adding to the resource inventory along strike and at depth—Focus is taking its flagship project into production. In 24 months, the company will claim pole position as the world’s lowest cost technology grade graphite producer.

“We have a large defined resource and even larger potential for growing it,” says Gary Economo, President and chief executive.

“With the high grade of the graphite content in the ore in the ground we’ll become the lowest cost producer in the world and enable many new high profile applications.”

The coming year consists of completing the scoping study well underway, continuing the search for the right offtake partners, permitting and feasibility works (backed by two historically completed feasibility studies) and swiftly into late-2012/early-2013 construction to complete at the 2013 year-end. Furthermore, armed with the large high grade NI43-101 resource, plans to delineate further tonnage, 10 graphite concentrated showing targets within the Lac Knife claim map, a patented processing technology capable of generating 99.99 per cent purified product and interests in Graphoid Inc., an outfit focused on graphene, Focus will rapidly deliver to the global markets the graphite supply they are hungry for.

The past 18 months have seen Focus step up from starting out as a junior explorer-developer with a handful of choice northern Quebec claims, to establishing itself as a leader for technology grade graphite. With its scoping study due to wrap up in a couple of months, the team is looking forward to further drilling out in depth the three zones comprising its current NI43-101 and exploring the stack of graphite shows throughout the wider Lac Knife area. Like any keen mine builder aware that mines are monetised as much as they are built by grade and tons, however high, Focus has readied for 2012 development activity by way of financing, completed in December, 2011. Raising approximately one third of the total funding required to take Lac Knife into commercial output, Economo says, is a critical step in seeing through the upcoming work programmes planned.

“Part of our strategy was always to de-risk the company by having a good cash position and that’s what we’ve done. The financing will make it a lot easier for us to raise the balance required for the mine and the processing plant and allow us to negotiate from a position of strength,” he explains.

The second part of Focus’ sublime production equation stems from the nature of the material itself. While other graphite players strive to put mines into production at grades of two, four and six per cent, Lac Knife’s 16 per cent grade-in-ground is quite something. At two per cent, a company would need to process 48-50 tonnes of ore, making it prohibitively expensive to produce one tonne of 98 per cent material. Comparatively, Focus need process six or seven tonnes of raw ore to obtain that 98 per cent premium product—and with an additional patented processing technology capable of purifying its graphite to an impressive 99.9 and 99.99 per cent product for lithium batteries. At 99.9 per cent concentration, one tonne sells at $4,000 on average while 99.99 per cent purity sells in a range of $10,000-$60,000 per tonne depending on end-user requirements. The company’s operating costs against premium priced production are unmatched.

“The processing plant we will start to build in the town of Fermont by the end of this year will take approximately 150,000 tonnes of ore annually, netting us around 20,000-27,000 tonnes of 98 per cent quality graphite,” Economo explains.

“For our patented proprietary technology, we’ll see a pilot plant by the end of this year and a fully operational plant alongside our processing plant in 2013.”

This Focus-masterminded process is also capable of producing graphene; another favourable potential revenue stream given that it results from the same economical, environmentally friendly process in significant quantities. The implications of this against current processing, which favours vapour chemical deposition-type activity that is both costly and damages the ore through oxidation, remain insurmountable.

“It also ties in well with our 40 per cent interest in Graphoid Inc.,” Economo adds.

“Graphoid is working with Rutgers University in the development of plastics that are extremely strong due to the incorporation of our graphene.”

Focusing (no pun intended) on the three zones within a 300X600 metre area which make up the current Lac Knife resource, Focus will commence deeper exploration during the spring. Expanding on the current deposit, drilled to 125 metres at a 45 degree angle, effectively 90 metres depth, the team plans to follow the graphite down to around 400 metres and further identify quite how large a resource it has.

“Given that it’s open in all directions that’s the deepest we’ll go for now,” Economo says.

“It’ll definitely be an open pit mine, so going down to 400-500 metres is totally feasible. We expect to come up with much higher resources this summer.”

Drilling for further resource delineation will also take place over the 10 strong showings of graphite concentration within the claim and each may well result in a pit with similar types of volumes as those currently accounted for the December NI43-101.

“We’ll also do surface exploration in the 265 claims we secured this year and last year in Quebec,” Economo says.

“If we want to reach our goal and be the biggest and the best, we need to offer variety to our global customer base. We need diverse products and we need to make sure that we have the resources to fulfil the long-term supply agreements we plan to establish.”

While graphite is Focus’ steadfast main game, staying diverse has remained on the agenda, evidenced by its Kwyjibo rare earth elements-copper project some 10 kilometres north of Lac Manitou where Focus has invested almost $3 million and fast-tracked the project in partnership with Soquem, the Quebec government’s commercial mining corporation, and obtained 50 per cent interest in just one year. Having identified rare earth element neodymium, the company is waiting on assay results from a comprehensive drilling programme undertaken last summer before it makes its next move.

“It’s a little early to say where it will go, until we get our results finalised and reviewed by our geologists over the next month,” Economo affirms.

“We’re at a point in our growth where we have to streamline our interests on Focus Metals and our graphite business. We plan to spin off the other projects in the next few months.”

Prioritising accordingly has also seen the company initiate offtake discussions with some of the world’s largest graphite users. Given that graphite is a requisite element in engineering disciplines from medical applications to construction and semiconductors to solar panels, interest in securing Focus’ high grade, low-cost North American supply has been strong.

“Over the coming year we’ll put offtake agreements in place, in fact it will probably be sooner than later,” Economo says.

“We have a number of people currently testing our graphite and we expect to have some of these offtake agreements signed in the near future.”

There is also room for graphite-knowledgeable parties of a sales, mining or engineering persuasion, he ensures. It’s likely that future offtake partners will be companies capable of placing Focus’ superior graphite products on international markets.

“Graphite, unlike many minerals and metals, is an engineering product and requires a lot of expertise. There are companies that have been doing it for over 100 years, so we see sense in teaming up with those sorts of groups in addition to developing it internally,” Economo explains.

“We’re not looking to option the property in any way. We’ll finance it and maintain control of it, but there are areas we could consider assistance on in terms of sales and technical support.”

At first glance, Focus’ vision to become the world’s largest producer of low-cost, high grade graphite seems a monumental challenge. Closer inspection of quite how impressive the resource, exploration potential, processing technology and funding secured actually are, reveals it to be a fitting one for the company.

Economo says that “the carbon age is just beginning,” and as it unfolds, Focus is braced to hit global graphite markets and deliver precisely the product everyone is looking for.