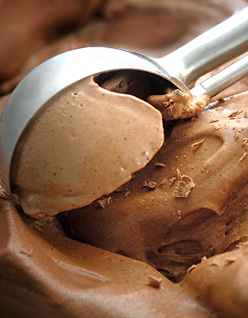 Foothills Creamery has been in business for more than 40 years, providing its products to the retail and food service markets. Never skimping on quality, Foothills Creamery offers its customers only premium quality ice cream.

A business as successful as Foothills Creamery requires a strong leader, something the company has in President Don Bayrack, who has been a part of the creamery business since 1969 as well. Beginning his career as a butter maker with former Calgary food company Swift Canadian, Bayrack tells that the company eventually sold its North American properties, which led to selling its equipment and property to Foothills Creamery. Six months later, Foothills Creamery would move into its own building, the same facility it calls home today.

It was a great time for Foothills Creamery to be in business. Churning and selling its own butter proved to be valuable, particularly given a butter shortage at that time.

“The key was keeping the cream rolling in from the farmers,” Bayrack said. “We did that until 1986 and then we went into the ice cream business.”

Barry Northfield, Vice-President of Foothills Creamery, added, “In 1986, we started manufacturing ice cream using some of our byproducts of the butter, such as butter milk. We knew we could make a good ice cream by doing that so that’s how we got in the ice cream business.”

Today, ice cream has emerged as one of the most popular products made by Foothills Creamery, available in a premium selection and 82 different flavours.

Sold to small businesses like mom and pop ice cream parlors, Foothills Creamery also supplies this business segment with other products like ice cream mix, soft serve ice cream, and yogurt, a product which has becoming particularly popular in recent years, and that end of the business has picked up dramatically.

A superior product indeed, yet Bayrack attributes much of the success of Foothills Creamery to the staff, many of whom have been with the company for 10 to 15 years, and a few for more than 25 years. This group truly makes a difference and Foothills Creamery would not be possible without such a dedicated team.

“Without that kind of support we wouldn’t be able to do what we’re doing, that’s for sure. It’s a very good environment to work in,” Bayrack summarized.

Moving forward, Foothills Creamery would like to continue churning out more products, particularly its specialty butters like whipped butter and garlic butter.

Foothills Creamery is continuously looking to come up with new specialty butters or add new flavours to its ice cream line, while always maintaining a selection of about 80 delicious tastes.

“Those types of products you can make some serious margins on when you’re competing with the old regular one pound butter, which is just a commodity,” Bayrack said. “Butter is still the largest dollar sales for us. It is a pretty good mix.”

What else furthers Foothills Creamery from many big names in ice cream? Aside from offering a premium product, Foothills Creamery can be very quick-moving and nimble with its products and its customers. For example, if a buyer was to run out of ice cream, Foothills Creamery strives to get their order to the customer by the next day, something that proves difficult for the conglomerates of the ice cream world.

“The competition has difficulties doing that because they’re so huge and it doesn’t work quite that simple, as there are too many hands to go through before they get the product,” summarized Bayrack, who added that Foothills Creamery is also always pushing to keep its equipment up-to-date and as efficient as possible in order to keep pace with the competition.

When Foothills Creamery began in 1969, there were about 80 plants in Alberta making butter. Today that number is only two, and it’s certainly an accomplishment and an illustrating point in the success of Foothills Creamery to be around all these years.

Bayrack concluded, “We come up with a plan and we stick to our plan, going through the natural good times and bad, and focusing on our plan and not wavering from one idea to another. We focus on what we’re really doing.”