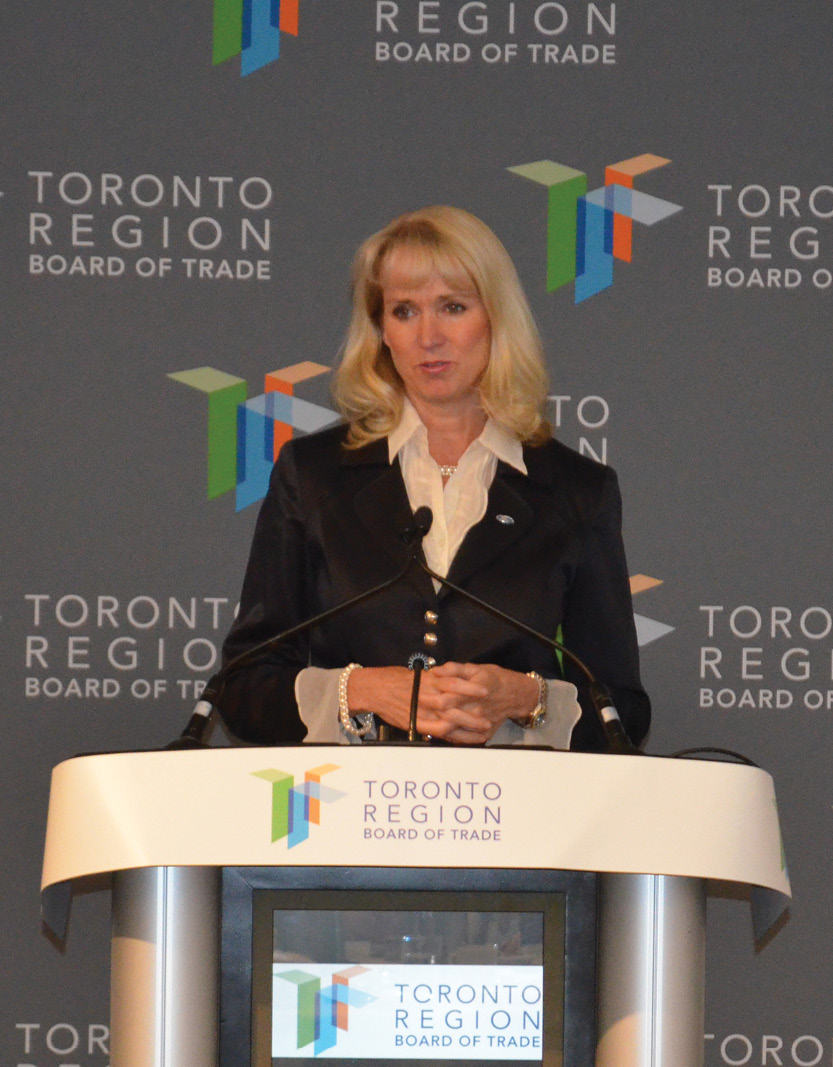 Now in its 109th year of operation, Ford of Canada, like all other established automakers, must stay ahead of the curve if it hopes to enjoy another century of success not only here in this country but worldwide.

To conclude that the automotive industry as a whole has been forced to streamline in order to survive would be a vast understatement.  As example, only the main plant in Oakville, Ont. and smaller plants in Windsor, Ont. remain open in Ford’s stable. Much of the convergence can also be attributed to automation, which now handles much of the basic workload. Four vehicles are now assembled at the Oakville plant: Ford Flex, Ford Edge, Lincoln MKX and the Lincoln MKT.

Ford Canada President and CEO Dianne Craig, whose office is at headquarters in Oakville, has seen a plethora of changes within the industry during her career and anticipates many more to come during the duration of her tenure as head of the company. Craig has served in her current role since November 2011 and has been with Ford since 1986 and as such has been a first-hand witness to both the trials and tribulations not only at her company but the overall automotive industry in general.

A native of Buffalo, NY, Craig took time to discuss the current state of the industry while attending a business luncheon at the Toronto Region Board of Trade.

“When I started in 1986 we had four of the top 10 name plates sold in the U.S. that were Fords,” Craig says. “It was an incredible time when I joined the company. I’m also a second-generation Ford kid.”

As Craig candidly notes, Ford has been on quite a journey during the past 25 years or so, and there has been no shortage of bumpy roads with which to navigate along the way. The bulk of the crises for the auto industry as a whole really began to show their initial effects in the early stages of the 2000s and lasted for nearly a decade in many instances.

During the next few years Ford essentially managed to break even but that was about it.

“We lost our way,” Craig openly admits. “We didn’t have the consistency or purpose that we needed and we lacked a real vision that we needed to take the company in a different direction.”

The slippery slope seemed to be gaining momentum and by 2006 through 2008, Ford lost nearly $30 billion, which Craig says can be largely attributed to restructuring within the company.

“We had no idea what was coming behind that in 2009 when the industry dropped to 10.6 million units,” Craig says. “It was just catastrophic. My point in telling you that is the ONE Ford plan really started to kick in with all the restructuring actions behind us. In 2009 we actually made nearly $3 billion in an industry that was at a record low.”

Since those dark days, most auto manufacturers have managed to recover but the prolonged downturn definitely left permanent scars. But even a 14.7 industry in 2012 is modest compared with levels previously achieved in years gone by.

According to Craig the success of the ONE Ford plan can be directly attributed to the leadership of Ford Motor Company President and CEO Alan Mulally, who joined the automaker in 2006 at the instance and perseverance of Chairman Bill Ford, who recognized his company was in dire need of help. Ford took over the CEO’s position on an interim basis in 2001 when the previous chief executive Jacques Nasser was fired, presumably for devoting too much time to foreign operations, including acquisitions and investments, while fortunes of the company’s core interests continued to decline in the United States.

The search for a replacement lasted almost two years before Ford managed to locate the right man for the position – Mulally. Prior to joining Ford, Mulally, a professional engineer, he was the executive vice president of Boeing and the CEO of Boeing Commercial Airplanes and is often credited as being the architect of BCA’s resurgence against Airbus in the mid-2000s.

There have been four main points to Mulally’s ONE Ford Plan since being implemented in 2006: restructure the business to operate profitably; acceleration of product development; financing of the plan and last but not least, changing the culture within the organization. It was a difficult time, as Craig admits.

“This was really painful,” she laments. “Around the globe we closed 28 plants. Seventeen of those plants were in North America. We let go 120,000 people; 67,000 in North America. I lost a lot of good friends at the company, but we had to do it.”

Ford as a company realized that additional investment was necessary to develop new products in order to grow. All this was happening two full years before the full-blown global recession kicked in.

“We invested billions during that time period even when we were heading into the depths of a recession,” Craig continues.

At the 2008 U.S. congressional hearings Mulally was present in Washington representing Ford. Others such as General Motors CEO Rick Waggoner were also in attendance, but he was ultimately blamed for a lion’s share of GM’s bankruptcy and was effectively fired by the U.S. government. Had he not been removed, there would have been no federal government bailout money.  Chrysler also found itself in a similar precarious financial position as GM. But Ford, while certainly struggling, was able to stay above water thanks to the $23 billion home improvement loan it had taken out. Making such a move came with high risks, including the need to put up the Ford trademark as collateral.

“You can only imagine the Ford family when we basically had to leverage the blue oval,” Craig relates. “It was a tough time for us but we had to go and support the industry during those congressional hearings. What’s really exciting is that we just paid back that loan last summer.”

Just recently Mulally made headlines by accusing Japan of manipulating the yen. He followed that with another scathing comment that its market is more closed to foreign products than China. Mulally’s stance has drawn significant support within the auto industry and beyond.

Mulally’s concern about the Japanese purposely devaluing their currency results in tougher trade negotiations for the United States and Canada. Mulally also was on hand in China for the opening of a factory by one of its corporate partners.

“Over time, all of our facilities are positioned so we can support all the markets around the world from any location,” he said.

Changing the Culture and Platform

Craig says one of the primary factors in Ford’s successful turnaround is the change in culture, which has been embraced by its employees at all levels. It was essential for survival.

“You can only imagine when you’re going through a crisis and things aren’t going well people aren’t getting along; people are panicking,” Craig offers. “Also, we’re a global company, but we were acting very regional. We did not have global platforms. Everyone was very territorial. It was Alan who really helped pull everyone together.”

“Our Ford Focus, which is the best-selling passenger car around the world has 80% common parts, which is huge,” Craig mentions. Such integration helps enhance efficiencies that previously were not there.

“We are the sales leader in Canada,” Craig smiles. “It all comes down to our great products.”

“We have screwdrivers that have brains,” Craig tells us. “They actually know the precise tension to screw in bolts. We have robots all over the plant that if there isn’t a precise body panel for assembly, then the line will shut down.”

Electric, hybrids, plug-in hybrids as well as gasoline eco-boost engines are all part of the lineup that Ford believes will help ensure its success moving forward.

Right now there hasn’t been an overwhelming response from the public in terms of purchasing electric or hybrid vehicles, but Craig says the company can accommodate such a shift in buying habits almost immediately.

“If consumer adaptation changes overnight and people start buying these products we can flex as quickly as we need to and build any combination of those types of vehicles,” she declares. “It’s a really important part of our strategy. It’s good for fuel economy and the environment. Eighty five per cent of the material that goes in our products is recycled.”

Enhanced safety features such as lane-keeping aids will result in the shaking of the steering wheel as a warning to the driver that they are wandering out of their designated lane or starting to fall asleep. Other such technology includes forcing the driver to buckle up before the radio will turn on.

“Employees engaging with consumers and really understanding what they want and value in a vehicle and taking some of the stigma out of the industry about the long process is a really big part of what we’re doing,” Craig confirms. “That’s what’s going to differentiate Ford. In addition to our product it’s about how we service our customers.”

It’s about having an iron-clad plan and not wavering from it. Companies that anticipate and innovate the best regarding what customers will want five and 10 years down the road will always come out on top. Simple to say – somewhat harder to do.