News of the charges was made known by federal prosecutors in Atlanta, the city of the company’s headquarters.

Sudhakar Reddy Bonthu, 44, used nonpublic information to determine Equifax had been breached last year before any public announcement and then bought put options that he exercised for a profit of more than $75,000 after the breach was announced, according to a court filing.

Bonthu, an Indian citizen, entered a not guilty plea. He was allowed to remain free on a $20,000 signature bond, which means he doesn’t have to pay anything unless he fails to appear for hearings. 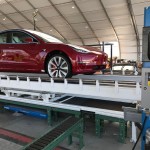