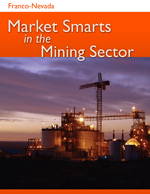 Market Smarts in the Mining Sector

Franco-Nevada is the gold-focused royalty company that changed the way the royalty game is played. It was Toronto-based founders, Seymour Schulich and Pierre Lassonde, who originally conceived the public royalty business model in the resource sector. In 1982, they began acquiring a portfolio of assets, handpicking high-quality properties located in Canada, Australia and the United States. With high-margin profits and lower exposure to capital costs, Franco-Nevada used its free cash-flow to acquire more assets. Today, the portfolio includes over 300 royalties, covering properties in operation, advanced properties at the permitting, feasibility or advanced exploration stages, early stage exploration interests and other assets.

Typically, royalties are created as exploration properties change hands. In what is best-called “insurance”, property sellers like to retain an interest in the property to share in gains if the new owner is more successful than they were in finding a profitable deposit.

With increased risk-aversion, however, the traditional model can fall short and that’s where the second source of royalties emerges. Some exploration and operating companies find that gaining capital by selling a royalty is a less expensive form of financing than raising equity. These shareholders realize that by selling equity, they are not only giving up a permanent interest in all their current interests, but also in all their future interests.

Royalty companies don’t buy equity. Instead, the mining company simply pledges a portion of its future production from a given property against a cash advance. Most royalties are based directly on sales revenue—the royalty holder can either receive a percentage of production for a certain number of years, or, more typically, for the life of the particular property.

The public royalty model is mutually beneficial, giving the mining companies complete control over their business, while allowing investors to reap the rewards of revenue with little exposure to the operating costs. Thanks to Franco and its founders, this model has become a common practice in the industry.

Having said that, not all investors are keen on the royalty concept. Some investors are concerned that royalties are too reactive, providing no control over the mineral assets. With the proven success, however, many investors have realized the royalty model means low risk and high return.
Company changes
The original Franco-Nevada became a tremendous public market success through the 1980s and 1990s, acquiring a broad portfolio of gold assets and eventually adding platinum, oil and gas and other assets to the list.

In 2002, Franco-Nevada merged with Denver-based Newmont Mining Corp., which is when the company left the public eye as a distinct brand. After five years, Newmont decided to sell their portfolio of royalty assets and that’s when Franco-Nevada took the opportunity to re-emerge. Fortunately, the portfolio stayed largely in-tact throughout merger, as well as in the subsequent spin-off from Newmont.

“The management group jumped at the opportunity to take the company public again,” says Paul Brink, Senior Vice President of Business Development. “The transaction was a great success for both for Newmont and for the Franco-Nevada shareholders. The $1.3-billion transaction ranked as the biggest mining IPO in North America.”

Less than two years in, the folks at Franco-Nevada remain excited at the prospect that the second phase will be just as successful as the first. Even with new competitors that have adopted the same or a similar business model—such as Royal Gold and Silver Wheaton—Franco believes the opportunities as good as ever.

Geoff Waterman, COO, knows that Franco has the benefit of a long history, saying “the management team has a lot of experience. Many of us have been with the Old-Franco, so we know what success looks like. We have maintained relationships with our contacts in the industry.” Franco-Nevada also boasts a broader portfolio. “We have a range of high-quality assets,” adds Waterman. “Franco focuses mainly on gold, but we also have a good portfolio of oil and gas assets. That diversity in itself increases our opportunities for success.”

Playing it safe
For a lot of mining company share-holders, business conditions are extremely difficult right now. Commodity prices are volatile, and depending on the company, financing options are uncertain. Fortunately for Franco-Nevada, they remain largely unaffected by the global downturn. Waterman explains the low-risk nature of royalties. “As commodity prices move down, you get very little change in your royalty streams. Our largest shareholders are generalist funds and many of them see Franco as a safe way to play the royalty sector.”

Brink goes on to say “the margins we have in our business are about 85 per cent, which is double the amount that a typical operating business would have.”

Franco-Nevada considers itself fortunate that it does not have to operate any of its assets. In the resource sector, it is an incredible luxury to be able to remove oneself from the operations side, because it’s a difficult and risky business. So what does the company do with its time? “The vast majority of management efforts are spent on growing the company,” says Waterman. “We’re always looking for new acquisitions.” With that in mind, the market spiral has actually been a good thing for Franco in a lot of ways. “One of the basic premises in the royalty model and in our business philosophy in general is to make sure that we’re well funded when others aren’t,” Waterman continues. “That’s when you get the best opportunities.”
The company looks for dips in the market cycle to acquire more assets. With the recent downturn of both the resource equity and debt markets, sources of capital have become limited, which is good timing for Franco-Nevada to step in. In fact, in the last few months, the company added two new gold assets to their ever-lengthening list—one in Mexico and the other in the United States.

On top of this patient approach to investing, Franco-Nevada also considers the location of their assets. They prefer to keep their business within well-established mining jurisdictions, such as Canada, Australia and the U.S. “We’ve seen that as new deposits become limited, companies have to go where the deposits are, which has taken some players into areas with a lot of political risk,” says Brink. “A great attribute of our portfolio is that about 95 per cent of our assets are in North America.”

Corporate Social Responsibility
Don’t mistake Franco-Nevada’s royalties as passivity in the mining industry. While the company does not physically operate on the properties themselves, their business model is dependent on the operators working in a responsible fashion.

Franco-Nevada is an active member of the World Gold Council (WGC), an organization in which members are committed to continual improvement in sustainable development performance. Where possible and relevant, Franco follows the same principles when it conducts its own business. Last year, approximately 85 per cent of the company’s gold royalty revenues came from members of the WGC or the International Council of Mining and Metals (ICMM). Franco is also represented in the Northwest Mining Association (NWMA), an important mineral trade association that promotes economic opportunity and environmentally responsible mining.

As for oil and gas, Franco’s producing royalty and working interests are from conventional production in Western Canada, operated by established producers with proven track records. One of these producers, EnCana, has been operating a carbon dioxide miscible flood in the Weyburn Unit in Saskatchewan in which Franco has an interest. This flood not only aids in oil recovery and production, but it also serves to sequester carbon dioxide, a greenhouse gas.

Looking ahead
Franco-Nevada is looking forward to continuing with their principal objective, which is to increase the share price of the company. “The Old-Franco had a great track record for doing that and we hope to replicate at least some of that success,” says Brink.

Will Franco look to diversify their royalty assets to include more resources?

“It depends,” says Brink. “We’re primarily gold, but we will invest in other commodities where we see the opportunity. Our main objective is to invest in assets with long resource lives. In adding assets, we are happy to pay a fair price for what is currently defined, but we make a return for our shareholders by being able to share in the upside without any future cost.”

Investors are betting that Franco-Nevada knows how to play the game, in part because they invented it. And they will be very well rewarded if Franco reaches the same level of success that the former company did. Following a period where many investors have experienced the risk of increasing costs for labour, equipment, fuel and power that come with mining operations—Franco-Nevada picked the perfect time to return to market.