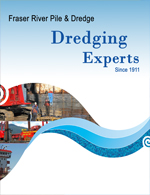 A long time ago, three Canadian gentlemen – Stanley Simpson, Perley Jones and Charles Harding established a business partnership. In 1911, Fraser River Pile Driving was founded, and the company spent much of its first year building its own piledrivers and readying other equipment for anticipated contracts. One of the company’s first major jobs was building B.C. Transport Company’s wharf in New Westminster. However, later on the Fraser team would take action in one of the worst floods ever in Canada – earning them a historic reputation. The Flood of ‘48 in the Fraser Valley completely wiped out roads, bridges, power and telegraph lines, and farmlands were submerged.

The C.P.R. mainline lost 600 feet of track, and the devastation was unparalleled. Fraser River Pile Driving came to the rescue – and in just 13 days, the train was back in operation, and the clean up was completed shortly after. Another project in 1956 had the company constructing the original Pitt River Bridge and Fraser River Pile Driving went on to build numerous bulk loading terminals throughout B.C. during the ‘60s and ‘70s.
It wasn’t until the mid ‘80s that Fraser River Pile Driving, Centennial Dredging & Sand Ltd., Sceptre Dredging Ltd., Kapilano Scow Rentals and Harbour Heavy Lift went through a series of mergers and acquisitions that eventually became Fraser River Pile & Dredge (GP) Inc. (FRPD). FRPD was finally incorporated in Alberta, February 25th, 2008 – but almost 100 years of reputation and solid service stand behind the company, once a three-man partnership.

Private and public partnerships
Mike Bevan Pritchard, Vice President of Major Projects and Business Development explained that although FRPD has all that time under its belt, the company strategy really hasn’t changed that much as long as he can remember. Pritchard has been with the company for a long enough time to be able to see where the change has come, over the last five to 10 years. “One thing that’s changed” he says, “is the emphasis now on partnerships between government and private industry. We’re not always in a competitive situation with other dredging companies, we engage in more partnership activities”. Pritchard says that FRPD used to be a strictly design and build business, but now the focus is on repeat customers, and making sure that every client is serviced properly and efficiently. FRPD’s dredging activities are about 35 per cent of the entire business.

To keep pace with changing economies, the company has always employed cost-saving methods of doing business, and tried to diversify as much as possible. This includes acquiring smaller companies or looking at expanding territorially.

FRPD’s dredging business, according to Pritchard, is what sets it apart from the competition. “The Fraser River needs dredging every year – it’s an ongoing process. We have a long-term exclusive contract with the port authority and the federal government to do all the dredging. We look after all of the navigation channels in the Fraser, and we have always had this competitive edge” says Pritchard. He adds: “Our dredging division is really what sets us apart from our competition in the west coast of Canada. We have state-of-the-art equipment, and have developed better dredging technologies. Other dredgers have the ability to do clam shell dredging, but we have hydrolic dredging equipment, a self-loading dredge, and a cutter suction dredge”.

Mitigating risk to aquatic life
Simply by the nature of their business, FRPD operates heavy equipment in the river that could potentially disturb the natural aquatic life. Pritchard says that their business is very transparent because “if we’re seen not to be respecting the environment – we’ll hear about it”. It is because of this commitment to the environment that the company has continued to upgrade their equipment, and developed new technologies to reduce the environmental impact of their operations. FRPD recently installed three new engines in their hopper dredge in order to increase productivity and also run a cleaner, quieter engine that is less of a polluter.

The company has also developed a nationally renowned technology to mitigate damage to aquatic life, called “bubble curtain” technology. “When you’re driving piles with pile driving hammers at the bottom of the river, hits to the piles send out a shock wave that can hurt aquatic life” Pritchard explains. “We developed a process where we put a circular piece of tubing around the pile at the bottom of the river that pumps huge volumes of air through the pipe. Small holes in the pipes release bubbles which absorb the shock waves up to the surface of the water, protecting the organisms around the dredge” he adds. The bubble curtain technology has garnered a fantastic level of support from engineers and other businesses doing dredging, and many companies now have the technology written in their specs. FRPD has also developed a sub-division of experts who look after environmental clean-up projects, and is always improving environmental processes.

FRPD uses other best practice dredging processes in order to mitigate risks to the aquatic environment. During clam shell dredging, often aquatic life is disturbed as the dredge moves through the water.

The environmental cleanup team at FRPD developed a system where a 10 foot diameter steel casing is set on the bottom of the river around the dredge while the dig is in process, and once the space is cleaned it is backfilled with clean material. This process is done in a honeycomb pattern until the remediated site is thoroughly cleaned.

With good people comes good fortune
With such an extensive history, there are obvious reasons that FRPD is as good as they are at what they do. Staying true to the business strategy, and the FRPD people has only brought the company good fortune. This good fortune, according to Pritchard, would not be possible without a tremendous staff behind the business. “The quality of people we work for and with is amazing. A lot of our employees are second or third generation workforce, and are part of our culture, as we are a family-oriented business” he beams.

FRPD currently employs an internal safety program with its own set of unique features – something that is imperative to the company’s success. “The onus is on us to keep our people safe” Pritchard says. FRPD has a full-time safety and environmental manager, whose main responsibilities affect the overall health of FRPD. The company is healthy, with 56 full time staff and an average of 100-300 unionized contractors working for them at any one time. The FRPD team has been dedicated to improving the business since 1911, and will likely continue to do so for many years to come.