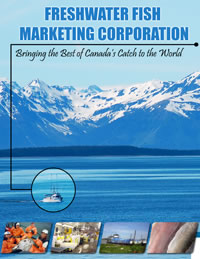 Bringing the Best of Canada's Catch to the World

The fish that swim in Canada’s many lakes and rivers are an extremely valuable resource, and since 1969 Freshwater Fish Marketing Corporation (FFMC) has been promoting and bringing them to market around the world. Though is as a crown corporation, FFMC doesn’t receive any government funding or support, and is therefore entirely profit-driven and profit-supported. Working with fishers in Alberta, Saskatchewan, Manitoba, Northern Ontario, and the Northwest Territories, the corporation’s mandate includes purchasing fish that are legally caught and sold, creating an orderly market, promoting freshwater fish in other countries, boosting the size of the fish trade, and increasing the profits earned by its fishers.

“Our business model is one of a cooperative,” explains John Wood, the president and chief executive officer of FFMC. “At the end of every year, if there’s a surplus in our accounts, we distribute that to the fisher suppliers who sold us fish through the year in the form of a final payment to fishers.” Last year’s catch resulted in a significant upswing in returns. On Nov. 24, Freshwater announced that for its year of May 1, 2007, to April 30, 2008, it was paying out $2.1 million in total to 2,400 fish suppliers, the highest payment since 2003. The successful year was attributed to the hard work of the fishers, as well as FFMC’s new marketing strategies, which included expanding to new markets and increasing promotion in existing ones.

The corporation’s mandate is the same as it was when it was first established. Says Wood: “We were set up in 1969 to bring some order to what was then a rather chaotic and unprofitable Western Canadian fishery.” There was a lack of organization among the many small agents and exporters, and fishers had no guarantee what they would be paid for their catch or if they would be paid at all if the agent or exporter they dealt with went out of business. The federal government entered an agreement with the provinces and territory in the hopes of bringing order to the freshwater fish market.

Down to business: how Freshwater works
The final payment that fishers receive is in addition to the initial payment from the agent to whom they sell their catch. The FFMC sets these prices each year on May 1. The final payment is the result of revenues left over from a good season, and it is divided among the fishers, similar to how the Canadian Wheat Board deals with grain farmers. Fishers, then, have a stake in the success of the overall business.

The corporation’s 110,000-square-foot plant in Winnipeg processes the vast majority of the fish brought in by more than 30 agencies that operate out of more than 60 collection points on 400 lakes. The fishers, two thirds of whom are Aboriginal, work mostly as individuals but sometimes operate in small crews, using gill nets to bring in their catch. Whitefish operations are slightly larger, Wood notes, and sometimes have larger boats where they can sleep overnight. Most work off of 22- or 24-foot skiffs with outboard motors. The fish is packed and transported to the FFMC plant in “totes,” which hold approximately 325 kilograms of fish and an equal amount of ice water. This shipping method ensures that the fish gets to the plant in very good condition, Wood says, a vast improvement over the old method, in which fish was packed in chip ice and were often damaged as they were jostled around on road to the plant. “We’re probably shipping out of here the highest quality freshwater product that you’ll find anywhere,” says Wood.

A very small percentage of the fish, less than one per cent of FFMC’s volume, is processed in China. The method of processing Northern Pike, most of which is sold in France, is incredibly labour-intensive, requiring skilled workers to use tweezers to remove bones after it is portioned. The cost of having this done in Canada is prohibitive to making a profit, even with the high fuel costs associated with shipping the fish overseas.

FFMC’s fish are exported around the world, with 70 per cent going to the US, 15 per cent to European and other countries, and 15 per cent staying in Canada. The corporation deals in anywhere from eight to 10 species, but there are four that make up the vast majority of its business: FFMC’s major revenue generator, Pickerel, which is the most valuable species and is sold mainly to northern Midwest states such as Minnesota, North and South Dakota, and Wisconsin to be used as a high-value item in restaurants; Whitefish, which largely goes to the US eastern seaboard as a kosher product, as well as to Northern Europe; Northern Pike, a lean fish valued for its firm and flaky flesh; and Mullet, which, is sold primarily to the kosher trade to be used in the manufacture of gefilte fish.

From lake to plate, safely and quickly
The fishers with whom FFMC works know the waters they fish intimately. In the three fishing seasons—spring, fall, and winter—they work in their own communities and eat the fish that they catch, a sure sign that they believe in the safety and the quality of their product. In winter, they head out onto frozen lakes using snowmobiles, where they drill holes and string their gill nets in between. It’s a substantial fishery, Wood says, and with this year’s early freeze-up, the fishers were at work earlier than usual. The quality and safety of the fish is ensured in a number of ways. FFMC gets data from the federal and provincial governments regarding the lakes in its jurisdiction, and if there are any issues in terms of the water quality and routinely tests the fish that comes into its plant. To fulfill their mandate to only buy fish that are legally caught, FFMC’s agents check that the fishers they deal with have commercial licenses. If a fisher loses his or her license it is the responsibility of the local provincial authorities to notify FFMC.

Small fish making a splash in the big sea
Wood makes a point to mention FFMC’s relatively small size on a global scale. “We are, I think, one or two percent of the Canadian fishery, and the Canadian fishery is only one or two per cent of the global fishery,” Wood says. However, he adds, FFMC is dominant in many niche markets and is able to maximize value for the fishers it represents by acting as a single, strong voice for them and giving them global market access that, individually, they would not have. “We really do see our focus as giving all of these individuals a chance to compete in what is a really competitive, highly regulated industry around the world,” says Wood. The size of the company also allows it to implement and manage operational programs and to develop new products; FFMC is currently looking at introducing halal products to their markets. They are also able to respond to changes to guarantee that their customers get a uniform product. Wood cites as an example the Pickerel fishery in Manitoba, which has been producing very large fish because the stock is strong and is able to sustain more mature Pickerel. Because restaurants have tight specifications about the products they can use, FFMC’s plant portions out the fish to the portion sizes that the restaurants want—something that smaller operations wouldn’t have the resources to do. “That is something that’s essential if fishers are to compete in the world of large restaurant chains,” Wood says. “We’re taking a very non-standard, unique product and turning it into a product that consistently meets the specifications our customers want to buy.”

Besides the capabilities afforded by its size, one of FFMC’s greatest assets is its long history, according to Wood. “We’ve got some very long-term markets that we have spent a lot of years developing and nurturing along,” he says, adding that when the corporation is attempting to make headway into new markets, their existing contacts are a valuable resource. FFMC also carries out marketing at food shows, which Wood says are also a good source of helpful contacts. The value of knowledge and experience in the industry that the company has gained throughout the past 40 years should not be overlooked, Wood says.

Shelter from the storm
At a time when being health-conscious is a priority for many people, FFMC benefits from producing a product that is lauded for its omega fatty acids and lack of the unhealthy fats that are found in red meats. Healthy products are on a long-term upward trend, Wood notes, and FFMC is also boosted by acting as a supplier of white-fleshed fish to global markets that are short on supply. As a result, the corporation has been able to increase its prices over the last two years and has been able to recover from the declines caused by the elevated value of the loonie over the past five. “The sudden strengthening of the Canadian dollar was a nasty hit to the bottom line,” Wood says. “So the long-term trend is upward and I think we’ve done a pretty good job of working with that over the last year or two.” In the short-term economic gloom, Wood says that FFMC will be hit like every other business. Because many of their high-value products, such as Pickerel, go into the US, there has been a drop in sales as consumers eat out less often and tend to opt for less-expensive menu items. However, Wood says that FFMC foresees the volume and price of their lower-value products staying steady, and he is confident that will carry them through the downturn. “We can weather the storm better than most exporters at the moment,” he says.

Planning strategically for a successful future
FFMC recently conducted a strategic planning exercise to bring their organization into focus and to look at the direction they may take in the next five or 10 years. They are now in the process of implementing the resulting plan, Wood says, which includes a substantial increase in the size of their business. FFMC needs to increase from their current $60 million in revenues per year to more than $100 million in order to gain volume efficiencies and market strength. FFMC is seeking strategic partners to increase the size and reach of business, by contributing to certain parts of their operations or helping them enter into new markets. The challenge of growing FFMC is not one of limited fish stock or processing capability, but rather a limited number of fishers. In part, Wood says, FFMC has to make sure it can get prices that enable fishers to make a good living, but in recent years the fishery has had to compete with other resource industries for its workforce. Though fishers have started to return to the fisheries, the economic boom in the West drew many of them away with high-paying jobs that offered pensions and benefits. As a result, FFMC saw a drop in volume, but now things are looking up, Wood says. “Because of the economy cooling off and shedding jobs and the fact that we’ve been able to increase our own prices over the past year,” Wood says, “we’re seeing fishers coming back into the fishery, which should in turn help our volume. It’s almost a reverse of what one would expect really.”