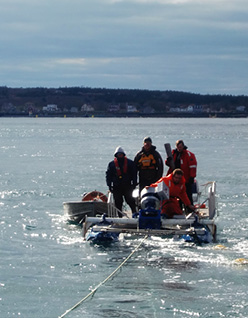 When the government of Nova Scotia set new regulations under its Electricity Act for almost 20 per cent of the province’s electricity to be generated from renewable energy by 2013, in an effort to reduce dependence on coal, Fundy Tidal was drawn in.

Fundy Tidal Inc. (FTI) was established in 2006, a year before the government’s avowal, and is committed to capitalizing on the renewable energy opportunities at its doorstep. FTI, a community-based independent power producer, uses the world famous tidal currents of the Grand and Petit Passages of the Bay of Fundy, N.S. to generate clean electricity. Based in Westport, N.S., many of FTI’s board of directors and shareholders were involved in founding the Scotian WindFields network of N.S. Community Economic Development Investment Funds and operating companies.

The Bay of Fundy is one of the greatest natural wonders in the world, with enormous tides that carry 100 billion tonnes of water during each tide cycle. To put this into perspective, that is more than the flow of all the world’s freshwater rivers combined, and generates forces equal to 800 locomotives or 25 million horses. The energy potential in the Bay is enormous, and, today, largely untapped.

According to data released by the Nova Scotia government, “When fully developed, new in-stream tidal technology has the potential to generate 300 megawatts of green, emission free energy from only two locations in the Bay of Fundy—enough energy to power close to 100,000 homes.”

FTI and the Province of Nova Scotia are in the final stages of establishing the first small-scale tidal Community Feed-In Tariff (COMFIT) for projects majority owned by eligible community proponents. With energy giants such as Nova Scotia Power Inc. and OpenHydro and Alstom working in the Minas Passage, FTI has its sights set on Grand and Petit Passages and the Digby Gut, “We are focused on smaller projects connected to distribution systems in a different area of province, the entrance to the Bay of Fundy,” says Morin.

“Recent studies conducted in partnership with Acadia and Dalhousie Universities indicate the site has an excellent tidal energy resource and other highly favourable characteristics. The province, through the OEER, has just commissioned the South-West Nova Tidal Resource Assessment which will further quantify this resource and potential sites for development over the long-term. The project will be built in phases based on environmental sustainability and available capacity on the local distribution system. With support from the community, the project will expand to supply predictable electricity to Brier and Long Islands and mainland distribution systems.”

Currently, FTI has submitted applications for five locations totalling three megawatts of power; three in the Digby County areas where three of the main tidal passages are located (Grand Passage, Petit Passage, and the Digby Gut), the remainder on Cape Breton Island on the other end of the province.

“There is a distinction between larger utility-scale projects and smaller distributed generation projects, but both are viable and worthwhile endeavours. In the grand scope of things, three megawatts of tidal power is not a giant thing, but at a community level, this is certainly a huge project, with great social economic benefits to the community. The government’s defines small-scale tidal as the use of tidal generators less than 500 kilowatts in size that are connected to the distribution system, i.e., the community level,” says Morin, “and that suits our portfolio.”

“We have a vision for the province to reduce the use of coal with biomass, solar, wind, and tidal energy. What we do have is the largest tidal resource in the world that has the potential to supply the majority of this power.”

Morin is working to see improvement in the province’s small scale distribution system by increasing its capacity and greater connectivity for distribution, not built to gather and distribute energy. The total power that is requested is 100 megawatts under all of these feed-in tariffs from communities, “less than five per cent of our power usage in the province, so it is, again, a significant contribution, but not at the scale hoped for in the larger Bay of Fundy area with excess of hundreds of megawatts of power there.”

With a term goal to produce about 20 megawatts of tidal power over the next five to 10 years and a company vision to “proactively create opportunities in the emerging marine energy sector with a focus on locally-owned and operated ventures to ensure economic development opportunities, wherever possible, benefit local communities and businesses,” FTI is a Canadian energy producer that is putting tidal power on the grid.