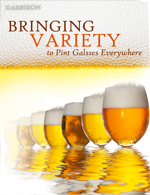 For a city that prides itself on its love for a good pint, the citizens of Halifax found themselves settling for the same old beer—that is, until Garrison Brewing came along.

Before 1997—when Brian Titus was still a diving officer in the Canadian Navy—the pub selection favoured the national domestics, with little variety and even less flavour. For Titus, now President and founder of Garrison Brewing Company, it was disappointing to have to leave the region to get a decent brew.

When he decided to leave the military, Titus returned to the Maritimes with a mission—to bring Halifax its first and much-needed craft brewery. With years of experience in home brewing and a new-found beer snobbery acquired after years of world travel, Titus set off to learn the tricks of the trade, knowing his city was ready for something new.
“Halifax is a phenomenal demographic,” Titus says. “For starters, it’s the capital of Nova Scotia, so there’s a lot happening here. It’s also the east coast naval base. We have countless universities and trade schools, a fabulous arts culture and let’s not forget the ports and cruise ships.”

Titus couldn’t have asked for a better opportunity. As he watched the craft-brewing industry move across Canada from west to east, Titus saw that Nova Scotia, Prince Edward Island and Delaware were the last pockets without a craft beer to call its own. He was right on time. “If it wasn’t me, it was going to be someone else,” Titus laughs. Twelve years later, Garrison Brewing is as successful as ever, producing five year-round beers and eight seasonal varieties.

Competing with the big boys
It’s no secret that Alexander Keith’s is a popular brand across the Maritimes, which is why Garrison wanted to offer something different when it came time to launch its first beer. To Titus, there was no point in trying to copy something that everyone already liked. So they looked around for something that was still accessible—a beer that’s not too dark or heavy—but different enough to be recognizable.

“We weren’t chasing the light beer crowd,” explains Titus. “We identified a niche that wasn’t being served by any of the big breweries. Garrison doesn’t try to be all things to all people. When you get into the craft-brewing world, 95 per cent of all beer fits within the Labatt’s/Molson category. So, right off the bat, we were turning our back on the mass market, focusing in on the remaining 5 per cent.”

After much deliberation, Garrison created and successfully launched their Irish Red Ale. To this day, it’s their best seller, representing about 35 per cent of Garrison’s business.

Since then, Irish Red has become a recognized style, and not just for the colour. Titus describes it as maltier than a regular red beer. While more companies are making red offerings, most will add the colour but leave the flavour out. They are still after a light and clean beer with no after taste. Garrison’s Irish Red has no such cowardice. And it’s a good thing too. Now that the large breweries are creating beers that were once only offered to niche markets, Garrison needs to stand out.

“Red beer has become the number-two category in Canada for beer sales,” says Titus. “Now you have Rickard’s Red and White, and Keith’s Stout. All of a sudden, everyone wants a piece of this 5 per cent pool. It’s getting crowded.”

Crowded, maybe, but too much too handle? Never. When your Imperial Pale Ale is the two-time winner of the Beer of the Year in the Canadian Brewing Awards, you know you’re doing something right.

A quality beer for everyone
With beers like Jalapeno Ale, Blueberry Wheat, Nut Brown Ale and Martello Stout, it would be difficult to argue that Garrison Brewing has little variety. Thanks to highly qualified Brewmaster, Daniel Girard, Garrison covers his bases in styles and ingredients.

Flavour is so important, that Garrison leaves as much of the process to Mother Nature as possible, adding no preservatives and, when they can, avoiding the filtering process.

“We don’t pasteurize our beer or filter it, when we can get away with it,” explains Titus. “Our main beers in six-packs are filtered. But our seasonal beers and fuller-flavoured beers are not. We allow the beer to condition a bit longer, so we can let them naturally settle. There’s going to be a little haze to it, but it’s so much more flavourful. It is remarkable how much more intense the beer can be when you don’t strip away the last little bit of yeast and protein.”

For those that are interested, all of Garrison’s beers are 100 per cent vegan friendly and, unless specified in the title, wheat free.

“Our priority is keeping the product as natural as possible,” says Titus. “We have no additives or enhancers—no cheap adjuncts, like rice and corn, bumping up the alcohol without adding any flavour or distinction to the product.”

Excited for the future
Garrison Brewing is in the midst of rolling up its sleeves for the future, both for the company and the planet.

“Environmentally, we’re doing a lot to help out,” beams Titus. “We recycle everything and try to waste as little as possible. In fact, we just got a new tankless hot water system, giving us hot water when we need it instead of wasting the energy to have a reservoir of hot water waiting around. We’re reducing approximately 50 per cent of our natural gas usage.”

On top of energy savings, the hot water heater should save Garrison a lot of money, as well as give them more flexibility in their brewing schedule. By removing the time it takes to heat a tank of water, the brewery won’t have to wait until the water is done to start brewing.
Being able to brew at will is a great thing when your business is expanding to other provinces and even Hong Kong.

“We have been experiencing annual growth in the double digits—just short of 20 per cent,” says Titus. “Garrison Brewing is actually expanding, so we don’t have to turn down sales in the summer. We’re getting two new DME tanks which should increase the capacity by about 50 per cent.”

DME (Diversified Metal Engineering) is a relationship that Garrison holds near and dear. Based out of Charlottetown, PEI, DME is an industry leader in craft beer brewing equipment. Garrison is proud to work with a local company that holds one of the highest reputations for what they do around the world.

With their new DME tanks, Titus is sure that they will be busier than ever before. Although they have never had trouble getting sales in the summer, Garrison wants to keep busy in the off season (from October to May)—part of the reason for seasonal brews.

Speaking of which, Garrison has finally convinced the Nova Scotia Liquor Corporation (NSLC) to carry their seasonal beers in stores, something they wouldn’t do for a long time.

“They finally realised that people like variety,” laughs Titus.