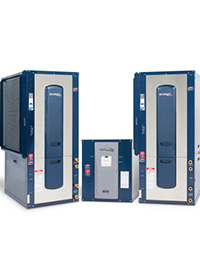 Success from the ground up

Geothermal heating and cooling, while once a niche industry responding to the trend of green, is now a distinct staple of the alternative energy industry.

Founded five years ago as a start-up in Cambridge, Ont. GeoSmart Energy has grown to become one of the largest geothermal firms in North America and a worldwide player in that industry.

Chad Brezynskie, Vice-President of Sales and Marketing at the firm, says, “Our technology is renewable, clean, efficient and environmentally friendly. With major global concerns like climate change and energy costs, we are this little company in Cambridge that has a technology that can decrease greenhouse gas emissions for commercial and residential customers, and can save energy costs as they continue to rise over the next five or 10 years. The return on investment and the attraction to geothermal will continue to rise. For GeoSmart, and for our industry, it just keeps moving forward.”

Despite the economic struggles faced around the globe over the past two years, GeoSmart’s sales in 2008 were up 238 per cent and that level was maintained into the following years as well. The firm has quadrupled since 2005, growing from a staff of 19 and moving into a 40,000 square foot facility.

The growth of GeoSmart Energy is parallel to the rise in popularity of energy efficiency, renewable heating and cooling solutions, and other green alternatives. But with an impressive line of geothermal products, a comprehensive education and training program, a savvy and knowledgeable network of dealers, a highly trained team of installers, and a visionary senior leadership team, the firm has proven it is more than just a trend follower.

At the helm as CEO is co-founder Stan Marco, one of the geothermal industry’s most well-respected and highly sought after knowledge experts and educators. His influence as an industry leader is reflected in the practices and principles widely used by the geothermal industry today, including setting the standard for how geothermal heat pumps are sized and installed in both residential and commercial properties. GeoSmart Energy is also the builder of North America’s leading training academy and testing facility, which welcomes more than 600 geothermal dealers and contractors to its courses each year.

“Our training school is unparalleled anywhere in the industry, certainly in North America there is really nothing like it,” says Marco. “It is a serious move because training is so important to us and to our industry.”

The firm has also formed strategic partnerships with organizations like F.W. Webb, the largest heating and cooling distributor in the northeastern U.S., and with Guelph Hydro, Norfolk Energy, ClimateCare and Alliance Homes.

On the product front, GeoSmart Energy lives up to its reputation for innovative, leading-edge geothermal systems. As the largest supplier of geothermal pipes in the industry, the firm was the first to convert the industry’s traditionally black pipes to green, increasing their durability and better reflecting their role as part of a sustainable energy system. The change has resulted in generating product differentiation, and drawing consumer and corporate attention to geothermal alternatives. Today, the company’s PE100 green geothermal pipe is considered to be the new geothermal standard.

The firm unveiled two new products in 2009: the Premium Q geothermal system, which reflects the firm’s commitment to consumer-oriented product development and environmentally friendly design, and the Premium H Series, a water-to-water system that can reduce hot water costs by as much as 60 per cent each year.

“We have always strived to have the best product and we have historically had a tendency of driving the industry,” says Marco. “These contributions come from right across the country, from us, our contractors, our sales person, our technical people, they all contribute to our daily activities, so we have managed to stay on the leading edge in North America for efficiency and configurations, and we have become known for introducing new products that exceed what has been the norm in the industry.”

Calls from Europe, the Caribbean, China, India, Indonesia and Ukraine have led to trips to the Bahamas, Germany, and Ireland, discussions with Ukraine and a visit from Mongolian representatives, further solidifying this Cambridge company as a leading North American geothermal specialist. Brezynskie adds, “We were in distribution before, so we understand that side of the business as well. What we offer to our customers is unique because we market differently, we support our customers in a different way, and those are the things that differentiate us in the industry.”

In 2010, GeoSmart Energy started developing market opportunities in urban areas of Canada. “For many years our industry has been focused on the rural areas,” explains Marco. “We get calls from Winnipeg and Toronto that they would like to have a geothermal system but they may not have space.”

The firm invested in a drilling company and drilling manufacturer in 2010 to help develop a geothermal-specific rig. “This drilling machine was custom-designed for our industry so that opens up a whole new market that we are just starting to move into,” says Marco. “Historically these machines are owned by contractors that supply these services. They are very large and heavy, but the machine we have now is a fraction of the size and half the weight. It focuses on drilling deeper holes but keeps the site very clean. It allows us to drill in urban areas, bringing geothermal downtown.”

Also in 2010, GeoSmart Energy started to make an aggressive push into Western Canada, as well as in the U.S. market. “We have been fortunate to have steady growth throughout the formation of our company,” says Marco. “We have seen phenomenal growth in the past few years, with a little leveling off over the last year, but we are seeing a completely different mood in the market place and expect significant growth from here moving forward.”

Opening up new markets with its drilling machines, and pressing on in the U.S. as it starts to recover from the recession, GeoSmart Energy is poised to continue its growth in line with the rise of the alternative energy industry. “Even though the geothermal market in the U.S. is somewhat developed, the response we get from people that we are doing business with in the U.S. is that they are quite pleased with our fresh, leading-edge approach,” says Marco.

“Not only do we show them how to do it, but how to make money at it also. It is a comprehensible program that shows them the ins and outs, as well as enlightening them on how to fashion their business model. Every day, 24/7, whether the sun is shining or the wind is blowing, a GeoSmart geothermal system will do its job.”