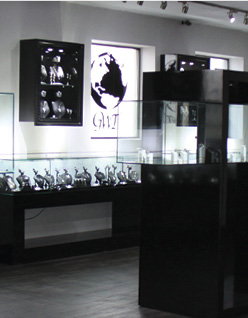 A CEO with a touch of luxury

There are very few CEOs around that can actually say that their office is a gold and diamond mine. Imagine working in an office where you are surrounded by the most exquisite and intricate designs of high-end fashion jewelry.

Imagine also being cognizant that you were the mastermind behind the fastest growing brand in the world of high-end designer fashion. Ramin Mesgarlou does not have to imagine, as he is the CEO that is living that life.

Mesgarlou hasn’t always been a CEO, he hasn’t always been in the fashion industry, but he has always been at the top of his game. He comes from a family of “go-getters” where he was taught that everything is possible if you believe it to be. And it is that belief in himself that has taken him to the top and beyond.

His company, Global Wealth Trade Corp. owns the brands, FERI and FERI Mosh which after just seven short years now compete with Louis Vuitton, Gucci and Tiffany. It is the corporate philosophy, “If it doesn’t exist, create it, and if it does exist, make it better,” that has taken Global Wealth Trade to the top in such a short time.

“You can’t compare us to anyone else in the marketplace—we are the world’s first prestige line, beyond luxury. If you want something that no one else in the world has, you come to us,” Mesgarlou tells CBJ.  “I tell people that if they want jewelry, then go to the store and buy it. If you want something special, a life piece, you come to us. It is two different worlds.”

“Diamond jewelry stops at 18-karats and the reason it doesn’t go past 18-karats is because it gets soft with the higher the purity. In 2007, through research and development, we found a way to make a 21-karat gold composition,” Mesgarlou said.

The fastest-growing luxury designer since 2007, Global Wealth Trade has achieved staggering average annual growth of 297 per cent per year since 2005.

Today, the product line of Global Wealth Trade is carried in nearly 60 countries, while many other nations, such as Malaysia, Singapore and China, among others, are also interested in investing and carrying these product lines around the world.

Mesgarlou is a unique man. He is very proud and protects his brand like a new born baby. His unwavering passion and dedication to his goal of being the No. 1 brand in the world is what keeps him, his staff, and his dedicated consultants so focused. Anyone can employ staff, but getting the staff to buy into the vision of the CEO and to build his dream is a very good indication as to the sort of CEO that Mesgarlou has become.

Moving forward, the expectation at Global Wealth Trade is to grow the company into a $1 billion corporation by 2015, the organization’s 10-year anniversary.

Global Wealth Trade would like to grow its reach to more than 100 countries worldwide with more than 100,000 luxury consultants. Another initiative, and certainly an important one in terms of the Global Wealth Trade branding, is that the company would like to add major galleries around the world, in Paris, Rome, Dubai, Hong Kong, and Toronto, among many other fashion and luxury hubs.