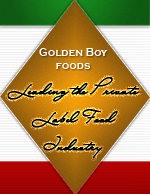 The story behind Golden Boy Foods is one of those feel-good tales of family struggle and ultimate success. Headquartered in Vancouver, the company was started in 1979 by the Viranis, a family who immigrated to Canada from Uganda to flee war and dictatorship.

On arriving in Canada in the early 1970’s, the Virani family started their business in coffee trading. In 1979, the family sold the coffee business and switched its focus to nuts. Through the 1990s, the company become a lot bigger and started to establish itself in the market categories that are still thriving—peanut butter, baking and snacking nuts, raisins and dried fruit, beans, rice and lentils. Golden Boy Foods won a lot of customers in that decade and they still have them today, remaining the food company behind other companies’ brands.

In the early 2000s, the business expanded from dried fruit trading and packing into raisin processing. The company built a raisin processing facility in the Northern Cape of South Africa in order to improve its supply and secure its position as the number one raisin producer in Canada. Coming into 2003, the business surpassed $100 million in sales, and has since continued its rapid growth, reaching $150 million in sales in 2005. The Viranis were probably not expecting Golden Boy Foods to become a leading producer, marketer and distributor of thousands of private label and branded food products, but that is exactly what they are today. In fact, the company holds the number-one market share position for three products that, combined, represent more than 50 per cent of their revenues: peanut butter, raisins and other dried fruit. All the major supermarkets and industrial bakers in Canada are customers, making Golden Boy ingredients a staple in the Canadian diet.

For those who are unfamiliar, private-label products are typically manufactured by one company for offer under another company’s brand. They are often positioned as lower cost alternatives to regional, national or international brands. Examples include President’s Choice, Our Compliments , Master’s Choice, Equality, No Name, Western Family, Great Value, Safeway Select and Whole Foods 365.

The Family Business
Like most family companies in which one generation has built up a highly successful business, the challenge becomes who will lead the business beyond the current generation and how will the next phase of growth be achieved. Golden Boy Foods was no different. In 2006, after more than thirty years as successful entrepreneurs, Mr Virani and his brothers began thinking about stepping back. The prospects for growth were exciting but new investment was needed to take Golden Boy Foods out of its Western Canada heartland and turn it into a global business. By July 2007, the decision was made to sell the majority interest in Golden Boy Foods to Tricor Pacific Capital—a leading private equity firm focused on growing high-quality businesses in partnership with management.

Tricor immediately helped Golden Boy Foods expand with the acquisition of another peanut butter business in Ontario, creating a stronger platform for servicing national customers profitably, and providing access to the North-Eastern U.S. market for the first time. By early 2008, the decision was made to transition the company’s leadership to a new executive. A worldwide search was conducted, and, in December 2008, the company hired, Richard Harris, a Coca-Cola executive, who had most recently been leading the $500million+ Coca-Cola operations in Norway.

Responding to Industry Trends
Harris was enthusiastic about what he found at Golden Boy. In the food industry, evolving with the trends is essential to keeping one’s business alive. Cutting trans-fats, offering organic products and working in nut-free buildings are just some of the examples of what food companies have to factor in to their manufacturing processes. According to Harris, Golden Boy has managed to stay ahead of the trends to ensure a safe and healthy product line. “Golden Boy was one of the first companies in Western Canada to become active in providing organic offerings,” says Harris, “so we’re one of the leaders in that regard. We now have a large organic product range, which has opened more doors with our customers. Actually, one of our clients is probably the most famous organic retailer in the North America, so it’s always been an area of strength for us.”

From an allergen point of view, Golden Boy is also on the leading edge. “Because we do handle all kinds of nuts and fruits, we’re used to having a proper procedure around allergen control,” Harris continues. “In Vancouver, we have four separate buildings, so we can have accurate allergen control in our packing operations. This ensures that we can meet the demands of today’s shopper.”Of course, the first demand is always safety. No one wants to purchase a product that has potential to harm them. In light of recent food safety concerns in North America, Harris knows the importance of due diligence. The company remains untouched by recent recalls. “We’ve been getting some benefits from the safety issues in the United States,” Harris explains, “because we have not been affected by it, ourselves. Customers are looking for strong companies with strong quality leadership and a continuous improvement focus.” The demand for food quality and safety will only increase in the future, and Golden Boy sees further opportunities to strengthen its operating procedures. The more on top of these issues they are, the more successful they will be.

New Leadership, New Growth
From the very beginning, Golden Boy Foods has been growing. With a compounded annual growth rate of 13 per cent for six consecutive years, the company and its team have an excellent track record of satisfying customers.

“Our customers are looking for good quality food at low prices,” he reasons. “That’s the requirement. When our customers look at us, they are impressed with our ability to source high-quality ingredients at affordable prices. And we have been able to provide that service over many years. We have superior knowledge of sources of supply and superior relationships with those people, which are a great value to us and our clients.” “Our goal is to create a leading company in private label, starting in North America, and focused on the products we do well: peanut and other nut butters; raisins and dried fruits; baking and snacking nuts; beans, rice and lentils. An immediate focus is Eastern Canada. For example, Golden Boy has a lot of customers that only order peanut butter, but we have a huge line of products that we are not supplying to those existing customers. Right now, that’s a major opportunity.”

Continuing from Eastern Canada will be the Eastern United States. It’s not that the company is ignoring the other parts of the world. In fact, their South African business will likely expand to meet the needs of European and African businesses, starting with dried fruits and going from there. How does Golden Boy manage to do so well? Harris believes it’s because they have all the right ingredients to meet client needs. “The history of the company tells a tale of fantastic achievement by the Virani family. Now our job is to take the next steps: build a first class management team capable of building a $500 million company; further professionalize our business system so we can better serve customers with excellence: and differentiate ourselves more and more from our competitors in terms of product quality and security of supply.”

Harris and his team are in good shape. While other companies are going through hard times, Golden Boy is in the food industry, and people have to eat. On top of that, more shoppers are looking for value items, so the private label business is growing faster than the rest of the food industry.

With a fresh focus and the security of an essential business, Golden Boy Foods can place its attention on continuing the rapid growth which has characterised the business so far. If history is the best predictor of the future, the next phase should be very successful. Golden Boy is already the leading private label food company in Canada. In five years, Harris believes it can be one of the leading private label food companies in North America, and an emerging private label supplier around the world. “We have a good momentum,” Harris beams. “We’re confident that we have an excellent future in front of us.”