Goldman Sachs Has A New CEO 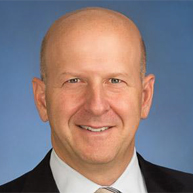 CBJ — Goldman Sachs Group has named David Solomon has its new CEO.  Until now, Solomon had served as the bank’s chief operating officer.

Meanwhile the company reported a better-than-expected jump in quarterly profit, but investors focused on relatively weak performance in its main businesses.

The change of leadership comes at a turning point for Goldman Sachs as it tries to generate another $5 billion in annual revenue by growing its consumer bank, squeezing more from businesses like asset management and changing the way it approaches trading.