GOP candidates sound off on Keystone 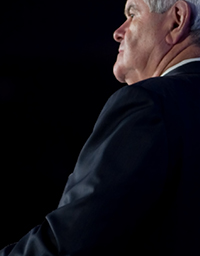 “The only way America works is when Americans are working,” stated Newt Gingrich, former Speaker of the House, Republican presidential candidate, and relentless critic of U.S. President Barack Obama, particularly in light of the President’s recent decision to reject the Keystone XL Pipeline.

The Keystone XL Pipeline proposed a US$7 billion, 2,700 kilometre extension of the current pipeline that runs from Alberta to Cushing, Okla. The project would spark the American economy, creating as many as 20,000 high-paying, American construction jobs, and would ship an estimated 700,000 barrels of crude oil a day to the refineries along the Gulf of Mexico.

“While we are disappointed, TransCanada remains fully committed to the construction of Keystone XL,” said Russ Girling, President and CEO, TransCanada Corp. “We will re-apply for a Presidential Permit and expect a new application would be processed in an expedited manner to allow for an in-service date of late 2014.

“Thousands of jobs continue to hang in the balance if this project does not go forward. This project is too important to the U.S. economy, the Canadian economy, and the national interest of the United States for it not to proceed.”

In a time when as many as 25 million Americans are unemployed, President Obama favoured environmental safety over mass job creation. Gingrich, and his fellow Republican candidates, have latched on to Obama’s decision, citing it as a “stunningly stupid thing to do.”

“There is no better word for it,” Gingrich exasperated during the presidential primaries. “[The Obama Administration] is so out of touch with reality, it is as if they were governing from Mars. We need the jobs! Maybe when these people are unemployed in November, they will figure out that jobs matter.”
Fellow candidate Mitt Romney, former Governor of Massachusetts, who has campaigned for American job creation, free enterprise, entrepreneurialism, and freedom and opportunity, described Obama’s decision “as shocking as it is revealing.”

“It shows a President who once again has put politics ahead of sound policy,” Romney said. “If Americans want to understand why unemployment in the United States has been stuck above eight per cent for the longest stretch since the Great Depression, decisions like this one are the place to begin.

“By declaring that the Keystone Pipeline is not in the national interest, the President demonstrates a lack of seriousness about bringing down unemployment, restoring economic growth, and achieving energy independence. He seems to have confused the national interest with his own interest in pleasing the environmentalists in his political base.”

Gingrich has warned American voters that Canada and Prime Minister Stephen Harper, whose own reaction to Obama’s announcement was described as “profound disappointment”, will simply drop the Keystone XL Pipeline in favour of the Northern Gateway Pipeline to export Canadian oil to Asian markets, particularly China, by transporting oil to the shores of British Columbia and then shipping it to Asia.

“Three or four years ago, I would’ve said that it was inconceivable that an American President would drive Canada into a partnership with China. But that’s what is going to happen,” Gingrich detailed. “Prime Minister Harper is a Conservative. He is Pro-American. But he is faced with a President who won’t allow Canada to get its oil to the United States, so he will cut a deal with the Chinese for them to finance a pipeline and ship it straight to China. What Obama will have done is kill American jobs, weak American energy security, and drive Canada into the hands of China.”

Texas Governor Rick Perry, who suspended his presidential campaign on January 19 and endorsed Gingrich, added, “It doesn’t surprise me. The President is focused more on the next election than on the next generation. Foreign sources of crude from countries that are not our friends is really problematic. This Canadian oil…there is a possibility that we could lose it to China, so I hope Americans will really become unhinged with this decision; it is a really bad decision for our country for energy independence and it sends a horrible message.”

Of all the GOP candidates, Gingrich appears the most disturbed by the Keystone XL Pipeline rejection, and has continued to condemn Obama’s decision through primary campaigning.

Gingrich regularly advocates for American energy independence from ‘conflict oil’ in the Middle East. “Obama’s decision is just plain stupid on energy security grounds. You have the Iranians practicing publicly how to close the Strait of Hormuz, Hugo Chavez as a dictator in Venezuela threatening our supply there. You have total instability in the Middle East. And if there was ever a time where you need an American energy policy to get free of the Middle East, it is right now. I want America to become so energy independent that no American President ever bows again to a Saudi King.”

Fellow Republican candidate Rick Santorum, former Senator of Pennsylvania, agreed that America needs to become energy independent. “It is absolutely essentially that we have as much domestic supply of oil, and that we build the Keystone XL Pipeline, to create the jobs it would create, and to provide oil from domestic sources. Pipelines that run on the floor of the sea or that come through America are the safest way to transport oil. Building rigs and piping that oil into our shore is the best way to create an economy.

“The decision by the Obama Administration is another capitulation to the radical environmental fringe—and in turn puts our national security and economy at risk. Our nation needs energy and this pipeline will provide this much needed resource. In rejecting this responsible project that will create thousands of American jobs, we are simply diverting this energy to our international competitors like China. This announcement is utterly irresponsible and one more reason why Barack Obama is not the right man to lead this country. As President, I would approve the Pipeline on Day 1.”

Harper continued to express his dissatisfaction with the pipeline delay at the recent World Economic Forum held in Davos, sounding off, “We will soon take action to ensure that major energy and mining projects are not subject to unnecessary regulatory delays¬—that is, delay merely for the sake of delay.”

Gingrich has assured Harper that the Republican Party would approve the Keystone XL Pipeline. “[Upon inauguration] I would sign the authorization for immediate deployment of the Keystone Pipeline. My message to the people of Canada is, ‘Don’t cut a deal with the Chinese. Help is on the way. By January, you’re going to build the right pipeline to the right place.’

“I want the Canadians to know that the minute I’m sworn in, they can build a less expensive, better, easier pipeline to Houston, which is better for our jobs, better for our energy security, better for Canada and is the kind of relationship we should have with our northern neighbour.”