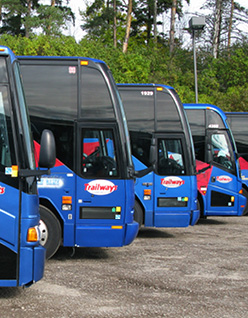 Larry Hundt entered into the motor coach travel industry by chance as a university student in the 1960’s, and remained in the travel business for life — and not a bad business either. Today, running over 50 coaches, Larry and Lorna Hundt and Great Canadian Holidays & Coaches represent a Canadian travel trademark synonymous with innovation, operating the most modern fleet in Ontario, offering a broad array of multi-day tours geared towards the widest range of travellers.

While the travel coach industry went through a dramatic number of changes since the company started in 1984, the Hundt family and Great Canadian Holidays & Coaches stayed on the top of the industry in Canada through creativity and innovation. The Canadian Business Journal spoke with Larry and Lorna Hundt, and their daughter Michelle, about their dedication to the Canadian motor coach travel business.

Larry Hundt said, “While we have been officially in the business since 1984, in 1990 we took the real plunge and purchased our first motor coach. At that time, we had already decided that we would become the industry leader. We were the first in Ontario to purchase the Prevost European style coach. Prevost was a new product at the time, and all of our competition thought that we were foolish to do this. The beauty of this scenario is that it turned out to be just the opposite, and it built the foundation for us— not just as a tour business but as a coach operation.”

Things started to change when the company decided to give its coaches more character by painting the scenes of Canada on the company coaches. The first “Canada from Coast to Coast” airbrush painting appeared in 1992, and was dedicated to the Canadian unity, marking the coach with the number 1867 — the year of Confederation. With the referendum in October 1995, with an imminent threat of separation of Quebec, the company worked with Ontario political parties at the time, and was hired to drive to Montreal for the rally only days before the historic vote. Standing centre-stage during making of Canadian history, the Hundts made a commitment to dedicate all company coaches to Canada and to promote Canadian pride. The company also changed its name to Great Canadian Holidays & Coaches, and the coaches draw the attention of bystanders ever since as the pieces of art they are.

The first advantage of a coach travel holiday is de facto avoiding the airport, as the airport has become much less people-friendly in recent years. Michelle Hundt Tupman, Director of Tour Operations, said, “While crossing the border, any kind of security check on a coach is far more pleasant. The major advantage and value of taking a coach is that the traveller sees the whole journey, rather than just focusing on the destination. For example, we offer a 23-day California tour, and not only do people see California, they see everything in between. What we say is that ‘every day is a destination’.”

“We also offer ‘Fabric of Canada’ product, giving the travellers the opportunity to experience fellowship within the local communities. For example, our coaches stop at the Moose Jaw airport base and have lunch with retired air force pilots, railway operators in Nova Scotia, and so on. We are not only showing people attractions and destinations but giving them personal connections to the people and locations and creating a personal experience.”

The company researched and developed detailed plans for its tours, not just the destination, but also the locales along the road. The company carefully structured detailed trip plans to show travelers engaging landscapes and provide information about the places they pass. Lorna Hundt, Managing Director, said, “We see our on-board Tour Directors as the catalyst for fun. Yes, there are parts of a trip such as border crossings that can be boring, but we developed techniques, whether it’s games, videos, sing-alongs, or an informative and engaging commentary for our Tour Directors to use and provide entertainment when appropriate.”

The company recently purchased a former factory to better suit the needs and size of its operation. With 81,000 square feet and 12 acres of land, this facility offers the space the company requires as it continues to grow. Larry Hundt said, “We did something rather unusual for a tour company — we started to expand to other businesses with which we felt synergy with our core business. We entered the automotive repair business focusing on buses and trucks, and offering parking on our lot parking, and we have recently expanded into car and truck detailing. We really became the region’s only full-service fleet centre.”

The company continues to grow its business, building a Canadian tradition of coach travel. While the company diversifies into maintenance and truck and car maintenance businesses, the core values behind its service remain the same — providing high-value memorable experiences every day on every road.