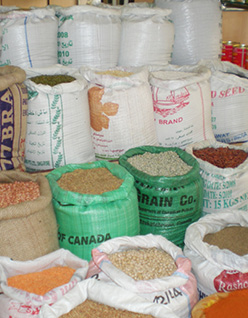 A pulse is a leguminous crop that boasts beans, lentils, soybeans, and chickpeas among its more popular varieties.

Used in extraordinary numbers for eating across the globe, Canada has one of the lowest consumption rates and highest export rates for pulses, despite their extolled nutritional virtues. Canada’s pulse industry in a multi-billion undertaking, producing about 5.6 tonnes annually according to Pulse Canada, with that number projected to increase five times in the next 20 years. In fact, 35 per cent of the world’s pulse trade comes from Canada.

Great Western Grain Co. Ltd. has been processing and exporting Canadian pulses since 1984 and is a Canadian success story for its versatility in the pulse exporting sector. Independent and family owned, the Lloydminster-based company typifies the stalwart business of central Canadian farming.

Great Western Grain got its footing by being one of the first businesses to process plants for pulses, diversifying into other processing as the company added capacity, which now includes red split lentils, football lentils, whole green peas, yellow split peas, and hard red spring wheat. Today, the company is known for being a reliable processor and exporter of Canadian special crops, specializing in the splitting of Canadian pulses. The state-of-the-art facility, complete with Sortex colour sorting equipment, along with its processing expertise allows the company to provide the highest quality yellow split peas, red split lentils, football lentils, yellow split lentils, whole green peas, channa dal and hard red spring wheat to its customers around the world.

“We are proud of the fact that we are a 100 per cent Canadian, family-owned operation in business now for more than 27 years,” says Bob Nelson, President of Great Western Grain.

“Our goal is to always supply the highest standard of quality products available,” says Nelson. “Our dedicated processing staff ensures quality control of all our products through strict guidelines and documentation of all storage, handling and grading of shipments.”

Consumers spanned as far across the globe as South America, Asia, Dubai, Kuwait, Indonesia, Pakistan, the U.K., Panama, Chile and South Africa can purchase Great Western Grain products, and do in record amounts.

“Canadian products are known worldwide and have a very good reputation for being grown in a climate and area that is viewed as pristine, more or less free of pollution with deep rich soils and climates where cold winter temperatures reduce or eliminate disease or pests that in other countries cause issues and require fumigation,” says Nelson.

High in protein, it’s been a very slow battle convincing Canadian consumers to use pulses. Until then, Great Western Grain continues to service the rest of the world’s needs, with 95 per cent of its production being exported.

Given that, the biggest challenge faced by Great Western Grain is freight and logistics. Railways and steamship lines have put in many redundant and tedious procedures which Nelson says creates a huge unnecessary workload for exporters. Due diligence and an exhaustive logistics monitors all production, tracking, exporting and freight which makes Great Western Grain a globally regarded reputable company.

“We understand how important it is to our buyers that their product arrives on time,” says Nelson.

“Our staff monitors shipments from start to finish with the knowledge and expertise of international trade exporting. Our logistical staff coordinates both small and large shipments from sourcing on farm pick up, processing, and documentation, ensuring shipments reach their final overseas destination on time.”