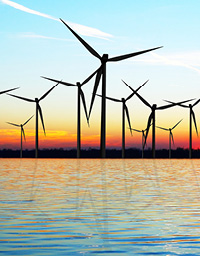 Enbridge Inc. is a global leader in energy transportation and distribution. Advancing North America’s green energy future, Enbridge invests in renewable and alternative energy technologies to not only complement its existing operations, but provide further environmental benefits for its communities.

In terms of its three most notably projects, it begins with the Ontario Wind Energy Project, also known as the Enbridge Ontario Wind Farm, of Bruce County, which is in operation today and is capable of generating 190 megawatts of electricity from its 115 turbines.

The Talbot Wind Farm Project, meanwhile, near Chatham-Kent, Ont., generates 99 megawatts of electricity from its 43 turbines. The third project, under construction, is Greenwich, which, like the Talbot Wind Farm Project, produces 99 megawatts of electricity from 43 turbines, enough to power 30,000 homes. The Greenwich Wind Farm Project is under construction in the Township of Dorion, nearby Thunder Bay, Ont., and will be in operation in the near future. The three projects differ in that the two completed projects exist in more rural, agricultural setting, while the Greenwich Wind Farm Project proves unique in that it is set in a forested area of the Canadian Shield.

Advancing renewable energy projects has become the next phase of Enbridge’s business, with the province of Ontario seemingly the next logical extension.

“Ontario was very complementary to the existing Enbridge businesses [that we have in Ontario], including Canada’s largest gas distributer, as well significant crude pipe and storage businesses, so we see Ontario as being a very complementary business environment for us to extend our renewable projects,” said John Maniawski, Senior Director of Power Generation Business Development. “Additionally, we’re attracted to Ontario because of the strong support the government has to advance renewable project, as well as its strong business climate.”

With such a commitment to the Ontario energy market, all three Enbridge projects have locked into 20-year power contracts with the Ontario Power Authority, granting the trio the benefit of price certainty, long-term cash flow and, ultimately, attractive returns for the company. Additionally, all three project locations provide attract wind farm settings, with strong wind resource, good transmission interconnection to the grid, and good community support, from both the landowner level as well as the respective municipalities.

“We’ve had a significant program in place to expand the renewable business. Over the last year or so, Enbridge has invested about $1.5 billion in renewable and alternative energy projects, which has resulted in seven wind projects in various locations across Canada and the U.S., totaling 710 megawatts of wind projects,” MacRobbie said. “We’ve delivered about 100 megawatts of solar projects, and we’ve also invested in a geothermal project.”

For Enbridge, the plan is to continue its lucrative investment in renewable and alternative energy projects.

“Renewable and alternative energy projects will maintain the risk and return characteristics that are consistent with Enbridge’s low risk business model, similar to that of the crude oil pipeline business,” Maniawski said. “We believe the fundamentals of the renewable energy business are strong, sustainable, and given that electricity demand will continue to grow, we believe that renewable energy is poised to meet a significant portion of that demand, and Enbridge is well positioned to grow its renewable platform in this environment.”

Enbridge looks to break the stereotype that wind farms aren’t the best for a community. Primary among these communal benefits is that these projects promote not only economic development, but also preserve agricultural resources, as well as the preservation of a community’s rural characteristics. With such a commitment, Enbridge also takes considerable consideration in sourcing local suppliers for its construction material needs, using local contractors and local businesses.

“These projects also provide a significant number of jobs,” Maniawski summarized. “When the projects enter operation, we still have long-term employment opportunities, so there really are significant community benefits during construction as well as during operation.”

An initiative known as Neutral Footprint is based on Enbridge’s commitment to environmental sustainability and the company’s ecological footprint. As the company has grown, it has placed an emphasis on three key premises. As Maniawski summarized, “Enbridge will generate a kilowatt of renewable energy for every kilowatt of power of our operations consume; we will plant a tree for every tree we remove; and we will conserve an acre of wilderness for every acre we impact.

“These three wind projects enabled Enbridge to expand our renewable and alternative energy program across Canada and the U.S., and that was our overriding goal of these projects—to expand the program in a significant way, providing us with meaningful opportunities for long-term growth,” Maniawski beamed. “In addition to economic benefits, the projects advance our commitment to environmental stewardship and generate attractive returns similar to those of Enbridge’s other business lines.”