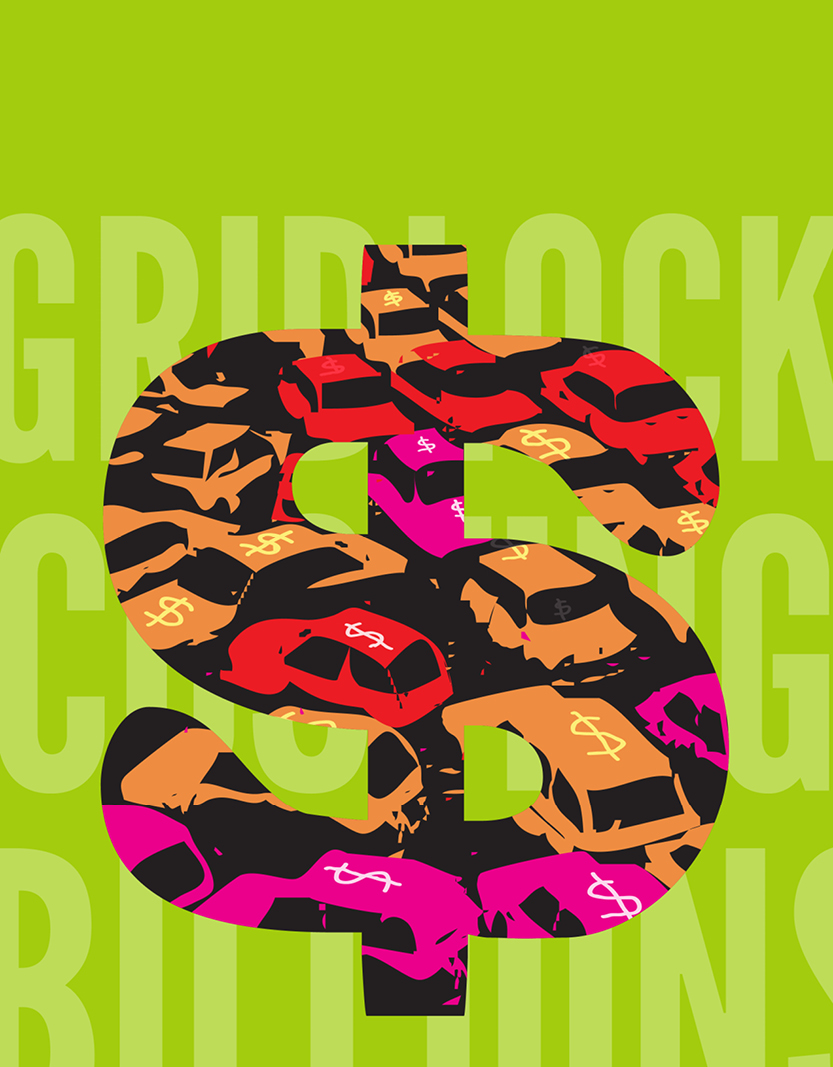 During the past two decades a number of large Canadian cities have become far more prominent on the international stage due to a tremendous upswing in a number of business industries, equipped with top-level talent from within our own borders and around the world.

Leading the way are cities such as Toronto, Vancouver, Calgary, Edmonton, Regina, Saskatoon, Winnipeg, Ottawa, Montreal and Halifax. Yet for all the strengths shown by our large cities from coast to coast is a metaphoric brick in our transportation path – gridlock.

With honourable mention to Vancouver, nowhere is gridlock more evident and soul-sucking than the widening domain of the Greater Toronto Area. It’s the financial cornerstone of Canada but future growth is being stifled by immense transportation congestion.

Toronto, Vancouver, Calgary and Montreal are major markets in the western world and yet there is great concern that our cities will fall farther behind on international depth charts due to gridlock concern. It’s literally costing the national economy tens of billions of dollars each year and the impact gets worse with each passing day. In last month’s issue, we revealed how congestion at the Windsor-Detroit international border is costing businesses billions each year in lost productivity, which was the primary incentive for moving forward with the DRIC Bridge project.

According to a study by Statistics Canada, commuting  took an average of 26 minutes to travel to work on a typical day in 2010, including all modes of transportation. The average commuting time was longest in the six largest census metropolitan areas (CMAs), each of which has a population of more than one million.

The average commuting time was longest for commuters in the metropolitan areas of Toronto, 33 minutes, Montréal, 31 minutes and Vancouver, 30 minutes.

According to the statistics, 82 per cent of commuters travelled to work by car in 2010, while 12 per cent took public transit and 6 per cent walked or bicycled to their destination.

Oftentimes commuters are left to ponder whether to take their own vehicle and sit in traffic or take public transit, which we’re also constantly reminded is better for the environment.  But in order for more Canadians to jump on board with this way of thinking, public transit is going to have to get a lot faster before people start leaving their vehicles at home in larger numbers.  Why?  It’s because commuters who use public transit took considerably longer to get to work than those who lived an equivalent distance from their place of work and went by car – even when stuck in traffic jams. The prevailing thought seems to be that if it’s going to be the same amount of time – or less – one might as well do it in the comfort of their own vehicle and listening to the radio station, as opposed to being crammed in like sardines in a loud environment with a bunch of strangers.

On a nationwide basis, users of public transit spent 44 minutes travelling to work, compared with 24 minutes for those who went by car. Therein lies the primary problem of getting people to use public transport.

The gap was not a result of distance travelled. Among workers in CMAs with at least 250,000 residents who travelled less than 5 kilometres to work, car users had an average commute of 10 minutes, compared with 26 minutes for public transit users. The same held true for longer commutes.

Ontario PC Opposition Leader Tim Hudak spoke about this very issue during a business luncheon at The Toronto Region Board of Trade.  He says fixing our economic problems begins with the provincial governments. That includes addressing the issue of gridlock and faltering infrastructure.

“Right now, we’re spending $1.8 million more per hour – every hour – than we take in, in revenue,” Hudak says.
One of the main detractors from an economic standpoint for many of Canada’s largest cities is the issue of traffic congestion. Business commuters and companies making deliveries sit for hours at a time burning expensive fuel on the jammed arteries. Toronto has also been slowly crumbling under an infrastructure that was designed in the 1950s for a city of much more modest size and density than it ever could have been imagined today.

A quick look at the overcrowded and crumbling Gardiner Expressway, or the jammed Don Valley Parkway and Highway 401 are just several examples of how bad gridlock has become. It’s arguably as bad if not worse on some downtown city streets. To put it into perspective, a U.S. Department of Transportation study concluded that Highway 401 through the northern section of Toronto is officially the busiest stretch of freeway anywhere in North America; busier than the LA Expressway and any of the major arteries in New York City, Chicago or Boston.  That’s a whole lot of traffic in what is not an overly expansive geographic territory.

“As Toronto grows, the problem of gridlock will continue to grow along with it, at a cost of $6 billion annually in lost productivity,” Hudak reveals. “We should be wary of politicians grabbing for new money to throw at disjointed plans that perpetuate a badly fractured system. It will require a greater level of innovation, imagination and leadership than ever. We have too many backseat drivers in our system right now.”

Hudak claims a Conservative government with him as premier would provide a commitment to building more subways in Toronto and expanding regional highways in The Greater Toronto and Hamilton Area. But all that costs money – and lots of it.

“Before we can go ask taxpayers for one more dollar, we need to demonstrate we have fixed the current system and are just as responsible with their money as they are,” Hudak says. Truth be told, we need government to be even better with money, because recent surveys have found Canadian citizens are often worse at balancing their books than the very governments they chide.

The first step in financing these projects is to root out the waste and strive to find efficiencies and savings in every facet of government – something that is currently sorely lacking.

Gridlock in Canada’s largest city would be so much worse if not for the provincial Go Transit system that carries commuters from greater distances outside the main GTA corridor. Provincial and municipal systems of buses and trains serving communities outside of Toronto now carries about 57 million passengers each year.

Queen’s Park and Metrolinx have been working on several major infrastructure projects meant to ease congestion but much of tomorrow’s planned infrastructure seems a long ways off. It was determined high-occupancy vehicle lanes on some highways would assist in the promotion of carpooling, but the results on that are still inconclusive.  Traffic still grinds to a halt regardless of the time of day in some sections. Adding to the problem are single riders who break the law and decide to use the lane themselves.  Some have gone as far as to use blow-up dolls in the passenger seat to make it appear as if there are two occupants in the vehicle. It’s both annoying and amusing when we hear about such individuals being caught by police. However, there simply aren’t enough law enforcement officers to nab all the offenders, with or without the blow-up doll.

Toronto City Council has been engaged in an ongoing epic debate as to whether or not expanded public transportation services should be built above ground or below.  Common sense would say it must be done underground over the long haul. The last thing Toronto needs is more oversized, slow moving ground-level vehicles along its busiest, most congested downtown streets.  While there’s no disputing subways will be more expensive and take much longer to construct, the short-term inconveniences will be worth it in the long term. Critics of the subway plan point out that it would be a waste of money to spend so much on additional lines below ground when it won’t attract enough riders to justify the cost. That is true – for now.  But there was also a time critics complained Highway 401 was useless because it was too far north.  But like the vast underestimation by planners 30 and 40 years ago, Toronto will continue to grow and the city would not be in the colossal transportation mess it’s in today had there been more foresight on potential for growth.

Another uphill battle is getting people’s opinions to change, and that won’t be easy based on the current numbers. According to a 2010 General Social Survey by Statistics Canada, of the 10.6 million workers who commute by car on a daily basis, about 9 million reported that they had never used public transit for their commute; that’s an astounding 85 per cent! Furthermore, about 7.4 million, or 70 per cent, thought public transit would be somewhat or very inconvenient.

If you build it, will they come? Based on these numbers it sounds like so-called commuting hell is still going to have to get markedly worse yet before drivers turn in their keys for a bus, train or subway pass.