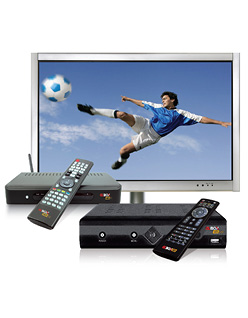 With 20 years of success in the telecommunications industry, GTA-based Group of Gold Line has translated this experience into the next generation of television.

What started as a provider of long distance prepaid calling has emerged as a Canadian leader in cultural telecommunications. The mandate of Group of Gold Line is to connect its users with what matters most – friends, family, language and culture, in a word: home. This principle has guided the development of Group of Gold Line’s in-house technology known as GLWebTV.

Available through Internet Protocol (IP) TV, GLWebTV is an open network television service delivered over the public Internet to provide global television viewing. A pioneer of open web television, GLWebTV represents the next generation of connecting people to the content of their home country, perhaps best demonstrated by the two original co-founders of Group of Gold Line, both of Iranian descent.

“We began by offering the public an affordable and easy way to stay connected with the people they left behind when they immigrated to Canada. Now those same customers are are not only able to to use our services to speak to home, but are using GLWebTV services to stay current with what’s happening at home—in the news, sports, even their favourite comedies and dramas,” Anissa Moeini, Director of Business Development with Group of Gold Line, told The Canadian Business Journal.

Users and future generations are connected to their roots and native languages through the educational tools and content of GLWebTV. Content is delivered through designated GLHubs within major markets that allow for the broadcasting of high quality, high-resolution programming.

Developing the technology for more than five years, Group of Gold Line has added several layers to the GLWebTV technology to take hold of the open network television market. GLWebTV offers a product that cannot be found elsewhere, extensively developed while constantly seeking improvement through added features. Group of Gold Line highlights this level of flexibility as a means to its success.

“We offer flexibility based on a desire to connect people as best as possible. It’s not just a business to us. It’s personal. Gold Line was founded by, and our workforce is still made up predominantly of, those who are new to Canada. We know our market on a fundamental level and because it’s such a personal thing,” Moeini said. “We’re constantly pushing to grow and develop.”

Plans for further development are in place and moving forward. As an open, global network, GLWebTV is not limited to a geographical area, meaning a world of expansion opportunities exist. While some challenges are apparent in technological development, the overriding goal remains to seamlessly connect users to their home cultures.

“The reason we developed open network IPTV was so that we could offer different cultural programming packages,” Moeini explained. “We started with the Persian language with the GLWiZ package; we have Arabic now – GLARAB – and we are in talks with Indian, Chinese, Russian, Polish and more.

“All of these different packages will be released in the future; Once again the idea is all about staying connected not just to home but to the culture. Viewers can be informed, educated and entertained all in their language of choice.”

The teams at Group of Gold Line believe that in the future all television will be delivered over the Internet. As such, Group of Gold Line is working to create a streamlined communications system that is easy to use, affordable, and accessible. At the moment homes and businesses have multiple incoming and outgoing lines to handle faxes, telephones, Internet, security systems plus many others. In the future when everything has migrated to the web, quality will rise and costs will go down.

“Education is a big way to unite people. People can see how the world operates in a united way, and giving people this access to information in different ways wouldn’t be possible without this educational element,” Moeini said. “GLWebTV connects you to your culture and to what is happening in other cultures. People can learn more about other people and get a more in-depth understanding of various cultures.”

After only one year on the market, Group of Gold Line’s GLArab.com service offers more than 250 television channels from 21 Arabic countries. Together with its on-the-go GLWiZ.com service, it covers more than 400 live television and radio stations, 20,000 hours of video-on-demand movies and television series, as well as a selection of pay-per-view programming. GLARAB and GLWiZ are available for viewing on multiple platforms, the most polular of which so far has been the GLBoxHD, Gold Line’s proprietary Set-top-Box, and online at GLARAB.com and GLWiZ.com. The recently launched GLWiZ iPhone app has proven popular in connecting users to their home cultures, staying in-tune with national content, news and, among the most popular features, following home sports teams, all while on the go. The GLARAB iPhone app is coming soon, with both content packages for Android Apps on the way soon after. GLWebTV is also launching an application for Samsung Smart TVs, so that content can be available from the Samsung App on your home television.

“Fundamentally we believe that in order for people to come together they need to have an idea of what makes a language and a culture unique,” Moeini summarized. “By providing a venue where that information can be shared we hope to educate people,” Moeini summarized. “Our goal is to unite people and unite the world – through education and understanding.”