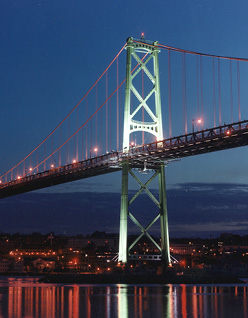 In an effort to boost traffic flow, the Macdonald Bridge added a reversible third lane in 1999. During the morning, two lanes head into Halifax, while two lanes travel toward Dartmouth during the evening rush hour.

In 2008, after 50 years, it was determined that the Macdonald Bridge needed to undergo a major renovation to redeck the suspended span of the bridge. The project would ensure the long-term safety and maintenance of the Macdonald Bridge, replacing the road deck, floor beams, and stiffen the trusses and suspender ropes.

Currently, project design is underway, led by engineering firm Buckland & Taylor and Project Manager Keith Kirkwood, working alongside Halifax Harbour Bridges (HHB) on the Macdonald Bridge Project. Headquartered in Greater Vancouver, Buckland & Taylor has a satellite office in Halifax which works with several local consultants, including Harbourside Engineering. The project design phase was initiated in 2010 with a preliminary engineering report and is slated for completion in September 2013.

Since April 2011, Kirkwood and his engineering team have investigated the project for any “show stoppers” – ensuring there are no surprises and that the project will move forward. One such challenge has been the Halifax environment, much more susceptible to strong wind conditions compared to his native British Columbia.

“In order to replace the deck of the Macdonald Bridge, and in order to do that and keep traffic running, we will use a system that was used on a similar project on the Lions Gate Bridge [of Greater Vancouver],” Kirkwood told The Canadian Business Journal. “The difference is the wind climate in Halifax is much more severe than Vancouver, so it has been a significantly bigger challenge to address some of the engineering issues that come out of the higher wind.”

The Macdonald Bridge Project is the largest undertaking by Halifax Harbour Bridges since construction of the A. Murray MacKay Bridge, which opened in 1970 and is the only other crossing of the Halifax Harbour. The idea is to complete the majority of the construction phase through evening and several weekend bridge closures to minimize bridge traffic disruption. In replacing the bridge deck – the main objective of the construction phase – the new fabricated bridge sections are carried by barge and floated underneath the bridge and then lifted into the position of the removed deck section.

Unfortunately, the separate pedestrian walkway and bicycle lane must be removed prior to the construction phase (it is structurally impossible to keep them on during construction, given the complexities of the project). Representing between 1,000 to 1,200 daily crossings in summer months, cyclists and pedestrians will be offered an alternative shuttle service courtesy of Halifax Harbour Bridges during the project’s construction.

Following the project’s tendering phase, construction work will be awarded and is scheduled to begin in 2015 and is expected to finish by September 2016.

According to Steve Snider, CEO of Halifax Harbour Bridges, the project cost (in 2015 dollars) is an estimated $205 million, based on an estimated cost of $165 million for engineering and construction, and then the inclusion of a $20 million contingency fund. Cash flow from HHB’s annual toll revenue ($30 million) will cover some of the project cost, while remaining funding will be borrowed. The 2007 financing was through the Province of Nova Scotia. The Province must also approve the project and its financing.

Toll revenues are supported through record traffic volumes that Halifax Harbour Bridges has experienced in recent years, growing to as high as 33.8 million travellers in 2011, with projections of 34 million vehicles this year.

Snider concluded, “In terms of the timing of the project, we commenced discussions on the need for this about four years ago. We went through a preliminary engineering that wrapped up in March 2011, which moved directly to a detailed design, to be followed by tender, and then construction work can commence.”