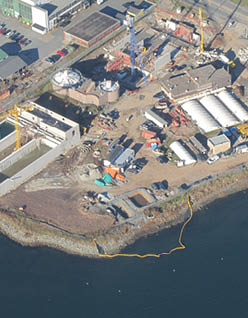 Solutions for a Sustainable Water Utility

In the summer of 2010, The Canadian Business Journal featured Halifax Water, the municipal water, wastewater and stormwater utility serving the residents of the Halifax Regional Municipality (HRM). Unlike many other city bodies, Halifax Water operates as a business, not as an extension of the municipal government.

The CBJ team spoke with general manager Carl Yates, who told us about the challenges and strategic plans the utility faced.

“The main thing is looking at asset management to turn the infrastructure situation around,” explained Yates, “We also have to factor in getting ready for and becoming compliant with federal wastewater regulations from the Canadian Council of Ministers of the Environment.”

Through speaking with Yates and researching Halifax Water, we learned about the organizations new mission: ‘to provide world-class services for our customers and our environment’. We discovered that Halifax Water believed environmental stewardship is on an equal footing with the customers they serve; they are one in the same. Each action it undertook balanced the need to continually provide high-quality service to its customers, as well as maintain the natural environment for future generations.

The federal government enacted the Wastewater Systems Effluent Regulations on June 29, 2012. In early 2014, CBJ decided it was time to revisit Yates and check in on how the organization had progressed throughout the past four years.

In 1945, residents of the City of Halifax realized the need for safe and reliable clean drinking water. The water supply system, left without substantial maintenance since 1861, had finally deteriorated into a critical condition. The pipes regularly experienced extreme leakage, and much of the infrastructure was barely operational.

The City, responding to a government-issued report on the need for a complete system overhaul, formed the Public Service Commission (renamed The Halifax Regional Water Commission in 1987) on January 1, 1945.

In 1952, the Public Service Commission purchased all water service utility assets from the City. This ensured the organization continued to operate in a business-like manner, without the heavy influence of municipal politics. This decision proved highly beneficial for the residents of the City of Halifax. The Commission managed to continually operate and fund new projects without financial assistance from the municipality. In fact, they often provided financial support to the City, in the form of a dividend each year.

In 1996, the City of Halifax, Dartmouth, Halifax County and Bedford underwent a metro amalgamation, resulting in the HRWC taking on the existing water utility infrastructure of the Halifax County and Dartmouth area. Realizing the need for high quality water in the Dartmouth area, the HRWC began construction on a new treatment plant and transmission system at Lake Major. The $50 million project was completed in December of 1998, on time and within budget.

On August 1, 2007, the HRWC took on a new challenge. The responsibility for HRM’s wastewater and stormwater assets were transferred to the HRWC, along with its liabilities and challenges. With the 2007 asset transfer HRWC rebranded itself Halifax Water.

At the time of transfer, the wastewater and stormwater asset renewal cupboard lay bare, with no funds to support future capital expenditures.
By the time of the June 2010 CBJ article, Halifax Water had already begun preparation for the pending Wastewater Systems Effluent Regulations. The organization was actively building funds to form a solid asset renewal base.

Halifax Water quickly recognized the need for a comprehensive plan that met their internal requirements as a business and coincided with the timeframe (2010-2040) of the new federal wastewater regulations. The utility identified three strategic drivers comprising the focus of the organization’s future: regulatory compliance, extended service for growth, and renewal of infrastructure on a sustainable basis.

These three drivers were identified in Halifax Water’s Integrated Resource Plan (IRP), completed in October of 2012. The IRP was performed under the direction of the Nova Scotia Utility Review Board, the quasi-judicial agency that regulates utilities in the province.

Halifax Water also conducted a formal Capital Funding Strategy (commonly known as a Debt Strategy). Just as the IRP identified which areas of the organization required investment, the Debt Strategy aimed to discover the best way to finance these investments. Compiled by an external consultant, the review aimed to find a common plan that balanced provincial policies, shareholder [HRM]interests, NSUARB requirements, and Halifax Water’s own desires to keep debt service and debt equity ratio in a comfortable range.

The review identified that, in order to satisfy all parties, the debt service ratio should not exceed 35% .i.e., the ratio of debt to total revenue on an annual basis.

Halifax Water’s third action was to conduct a formal Cost of Service Study, approved by the Nova Scotia Utility Review Board in early 2012. The Cost of Service Study aligned costs with those who should pay for the much-needed investments identified in the IRP and Debt Strategy. Prior to the 2007 transfer of the wastewater and stormwater system from HRM, neither service had undergone a cost of service study – ever.

In January 2013, Halifax Water submitted a rate application to the NSUARB based on a formal Cost of Service manual, tied to the findings of the previous study. This manual was to be used as a guide for all future rate applications. The most significant alteration in rate structure was the creation of a separate charge for stormwater service, which had previously been combined with the wastewater charge and based on water consumption.

Stormwater is considered a ‘passive service’ – even those without a connection to municipal pipelines require a way of managing excess runoff caused by heavy rainfall and snowmelt. Yet for over a decade, suburban and rural HRM residents without water or wastewater service had been receiving stormwater service for free, as the previous rate structure was charged based on pipeline connectivity.

“Many had simply assumed stormwater service was part of the tax base, but it was actually being subsidized by those in the urban core who were connected to piped infrastructure. The rural area residents had been receiving stormwater service for free, at the cost of their urban neighbors,” explains Yates in a June 2014 CBJ interview.

“This glaring imperfection appeared in the Cost of Service study. We couldn’t allow the cross-subsidization to continue as it was against cost causation principles as dictated by the NSUARB . This started the creation of a separate and distinct stormwater service charge.”

Halifax Water aimed to create a fair billing system for all HRM residents – one must pay for the services they receive. The new, separate rates for water, wastewater, and stormwater came into effect in July 2013. Yet several rural area residents grew upset at the $30 annual bill. Several local media outlets jumped on the trigger phrase “ditch tax” (as much of the stormwater service involved the maintenance of off-property ditches for water runoff).

Halifax Water truly experienced that no good deed ever goes unpunished. In an attempt to create a fair and equitable rate structure for all those living in the HRM, the organization received excessive negative press on their actions.

Although the controversy has lessened, several rural residents still struggle to accept the new billing process. Several have appealed to the Nova Scotia Utility Review Board for a reassessment of their property, claiming they do not require the stormwater service and therefore should not be charged.

“Whenever you do something new, there’s bound to be controversy,” says Yates, “This is a learning curve for all of us, but I believe that, with time, it will work out for the best.”

Combined, the IRP, the formal Cost of Service Study, and the Debt Strategy create what Yates affectionately refers to as “the Holy Trinity.” The name derives from the importance and interconnectivity of the three initiatives. As put by Yates his self-written article ‘Sustainable Infrastructure: A Water Practitioner’s Perspective’, published in the May 2014 edition of Canadian Civil Engineering, “the IRP answers the question of what investments have to be made, the Debt Strategy answers the question of how to finance these investments, and the Cost of Service Study determines who pays.”

When Halifax Water took on the HRM’s wastewater and stormwater assets in 2007, they adopted all of the infrastructure maintenance issues that came along with it.

“One of our big challenges is educating our customer base that we must fund wastewater renewal programs now. We can’t wait any longer to invest in infrastructure. This means the rates must rise to a sustainable level,” Yates explains.

“Most people understand and appreciate this. If we ignore infrastructure problems, we will have more collapses, more sinkholes. We cannot keep deferring our problems to the next generations. We have to be good stewards in maintaining the services we use.”

Over the past four years, Halifax Water has continued to raise funds through incremental increases in service rates. Through bringing the issue of intergenerational equity to the forefront, Halifax Water is ensuring that both current and future residents of the HRM receive efficient water, wastewater, and stormwater services.

Halifax Water’s mission is to provide world class service to both its customers and the environment. In order to uphold its commitment to environmental sustainability, the utility invests heavily in developing new technologies and innovative techniques that promote efficiency and environmental stewardship.

On May 30, 2014, the Canadian Society of Civil Engineering awarded Halifax Water the “Excellence in Innovation in Civil Engineering Award” at its annual general meeting and conference. The award was given in recognition of Halifax Water’s forward-thinking program to reduce leakage in water distribution systems and its approach to advanced pressure management.

Halifax Water’s water loss control program is internationally renowned and admired, with several other municipalities observing and implementing its methods. On average, the utility has reduced leakage in the water distribution system by about 40 million litres daily, equaling to over $600,000 in annual savings.

In order to continue their environmental stewardship and monetary savings, Halifax Water is currently undertaking a project never attempted before. In order to generate electricity within their own distribution systems, Halifax Water is installing in-line turbines within several control chambers of their Pockwock distribution system. The natural head differential at Pockwock will generate substantial amounts of hydroelectricity while providing optimal water pressure for customers connected to the pipeline. The in-line turbine project is expected to be operational by the Fall of 2014.

“The relationship between water and energy is very real,” Yates explains, “Not only are we reducing our electricity use and increasing efficiency, we’re generating renewable, carbon-free energy and feeding it back into the Nova Scotia Power grid.”