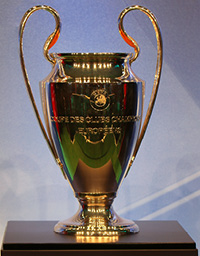 Tire manufacturer Hankook has signed on to become an official sponsor to the UEFA Europa League for the next three seasons, through 2015. The new partnership demonstrates another milestone in the company’s European marketing approach to sustainably increase brand awareness in the company’s biggest regional enterprise and reinforces Hankook’s long-standing engagement in European soccer.

It’s expected Hankook will benefit from extensive brand exposure such as perimeter board advertising in the stadiums, media backdrops during flash interviews as well as during official UEFA press conferences. The competition also attracts an extensive live and television audience – not only in Europe, but throughout the world.

“We are excited about our new partnership with the UEFA Europa League,” explains Se Heon Kim, Vice President of Brand Division at Hankook Tire. “Soccer sponsorships represent an integral component of our European marketing strategy. The emotionality in soccer is a perfect match to our company motto ‘Driving Emotion’.”

“We are pleased to be supporting the UEFA Europa League, one of the most challenging and highly emotive competitions in international soccer,” Se continues.

“This unique Pan-European platform cements our long-term engagement as a European soccer partner and is a perfect opportunity for us to sustainably strengthen our brand awareness, especially in the Ultra-High-Performance sector.”

UEFA is also ecstatic about the new association with Hankook.

Hankook is known for its premium quality, especially in the field of ultra-high-performance tires and we look forward to joining forces with Hankook to build the competition awareness and engage with fans.”

Headquartered in Brampton, Ontario, Hankook Tire Canada Corporation is a technology-focused, customer-oriented company that markets and distributes a complete line of high performance and ultra-high performance passenger tires, light truck and SUV tires, winter tires and medium truck and bus tires in Canada. As the National Partner and the Official Tire of Hockey Canada, Hankook Tire Canada has been very generous in actively supporting grassroots sports and contributing back to local communities.