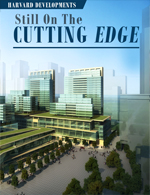 Still on The Cutting Edge

The Hill Companies is an umbrella under which a variety of businesses are nestled. For over a century, The Hill Companies have remained a steady Saskatchewan-based force throughout generations, business lines and economic cycles.

Their motto is simple: “Start with a foundation of solid values and stay true to the things you believe in.” Today, that principle continues to be the cornerstone of every business, community and philanthropic decision made by the company and its owners.

The story of The Hill Companies begins in 1903 when its founders, E.A. McCallum and Walter Hill, sold some land—where the Saskatchewan Legislative Buildings are presently situated. They started McCallum Hill Limited, a business specializing in real estate development and insurance. Today, that initial company remains under The Hill Companies, along with Harvard Developments Inc.—the primary operating entity, and the eventual highlight of this article. Other companies under the Hill umbrella are in industries such as broadcasting, oil and gas, manufacturing, surety bonds and insurance. All are headquartered in Regina, Saskatchewan.

The Hill Companies are a model of diversity and achievement. Over the years, the second and third generation owners, Fred and Paul Hill, firmly established themselves as leaders in real estate development and the national business community. In Western Canada, the Hill philosophy and personal style is legendary. In their home city of Regina, Saskatchewan, the Hills are the largest owners and managers of commercial and retail properties.

Paul J. Hill, President and CEO of Harvard Developments, and his team are all about creating value assets. Dealing in commercial, office, retail, industrial and investment markets, the company has a long history of performance. An immaculate record often means having a dedicated and experienced team, which is certainly the case for Harvard Developments—and they wouldn’t have it any other way. The principals and senior management have a vast knowledge of the real estate market in both western Canada and the south-western United States. Experience in development is complemented by lasting relationships with joint-venture partners, professional consultants, general contractors and sub-trades to provide an overall results-oriented service. In virtually all of their
development and or management projects, Harvard Developments recognizes teamwork as integral to their operations. Presently, the company manages over 4.5 million square feet of property in Alberta and Saskatchewan, with an ownership interest in 80 per cent of them—a success built on working with others.

Taking care of the local and global community
Also focusing on the value of honest work, Harvard Developments takes their parent company’s motto and embodies it into the corporate culture to keep staff motivated. In focusing on integrity, community commitment and mutual respect, Hill wants to set his company apart from the others. “We believe our culture serves us well in terms of the kind of people we do business with, which is with people who are likeminded,” says Hill. “We have competitors who have different corporate cultures and that’s okay, but the people we work with appreciate that we want to help them achieve their goals with honesty and integrity.”

The company culture spreads to more than just the people they work with. Harvard Developments also has strong ties to the communities in which it operates. The company regularly gives back to its city, volunteering at events or donating to community causes.

Most recently, they participated in the Regina and District Food Bank 2009 Canstruction competition, a design-build event for those in the construction industry, using canned goods as materials. Through a partnership with Stantec, Harvard Developments built a creative structure made of canned food to generate awareness for The Food Bank. Beyond their immediate surroundings, Harvard thinks on an international scale, which is why the company is so dedicated to best practices in environmental design and construction. According to Hill, all of Harvard Developments’ projects use cutting-edge technologies to increase environmental sustainability, implementing Leadership in Energy and Environmental Design (LEED) methods wherever possible.

For those that don’t know, LEED-certified buildings are built to use key resources more efficiently than conventional buildings simply built to code, providing healthier and more comfortable work and living environments. From improving air and water quality to reducing solid waste, LEED strategies benefit owners, occupiers, and society as a whole.

Urban-village projects
Harvard Developments may have a long history, but the company’s story doesn’t just trail off. In fact, they have a big future ahead of them. Right now, Harvard Developments is in the midst of three major urban-village projects located in Regina, Calgary and Edmonton respectively. These projects are more than just condos or office buildings; they represent the future of Harvard Developments’ real estate operations, providing a unique opportunity not only to the company, but to western Canada as well. Urban villages are a relatively new urban-design concept, characterised by multi-purpose space, widely accessible public transit, pedestrian- or cyclist-centred plans and an old-meets-new design. Urban villages provide an alternative to recent patterns of urban development in North American cities, especially urban sprawl and modernism. They are designed to reduce car reliance, promote self containment—people working, recreating and living in the same area—and facilitate a strong sense of community.

In Edmonton, Harvard Developments—along with its partners—is developing a 100-acre urban centre called Currents at Windermere, which includes retail, entertainment, office and residential offerings. As well as showcasing boutiques and local businesses, Currents also has big-box stores such as Wal-Mart and Home Depot, maximizing style and convenience for the shopper. Unlike traditional enclosed malls or vehicle-centred facilities, Currents has a town-square feel.

Regina is in the process of a similar urban village retail development. This time, it’s an 80-acre property to be a part of the planned suburban community, Harbour Landing. The project is called Grasslands, a name that celebrates Saskatchewan’s prairie history. Harvard Developments is doing the commercial development for the pedestrian-friendly project, already completing space for Wal-Mart and Lowes. Also included in the Grasslands designs is more green space, so residents can enjoy some nature in the city; this part of the project will be built by Dundee Developments.

Finally, Calgary’s existing Eau Claire Market will be re-developed into a mixed-use property, bringing life back to the area. The market will undergo dramatic changes to improve the area by adding residential and office space. Harvard’s plan includes dividing the site into four sections to be built in two separate phases. Each planned phase includes the construction of a high-rise condo tower, hotel and office towers. The lower flowers will contain retail, a specialty food store, destination entertainment and restaurants.

“All three developments will be the most exciting mixed-use urban centre destinations in all of Canada,” says Hill. “There aren’t many comparable large-scale, mixed-use projects in the North America right now that accommodate a pedestrian-focused village.” For Harvard Developments, these three projects represent the next 10 years of the company. “Never before in our history have we had the opportunity to bring forward such major projects that incorporate not only state-of-the-art technology and know-how, but a completely new urban design that will complement the living environment of the surrounding cities,” Hill continues. “These developments will enhance the experience of every resident in Regina, Edmonton and Calgary, because people will be able to enjoy these services like they never have before. We are proud to be a part of these projects.”

Still a driving force
Harvard Developments shows no sign of stopping. With the urban-village projects underway, the company has lots of work ahead of them. Outside of the urban-village concept, the company will continue to seek opportunities to build office buildings, retail and industrial complexes in Regina, Saskatoon, Calgary and Edmonton. As for short-term goals, Hill says he would like to weather the treacherous economy. Although Harvard Developments is going strong—especially in Saskatchewan—Hill is aware that no company is completely immune to the global economy.

“The banking community is struggling and that impacts us, like all businesses,” says Hill. “So, our goal for the next year is to keep our projects together and running, to maintain full employment and to come out from all of this better than when we went into it.” For a company that has seen two World Wars and the Great Depression, Harvard Developments should have no problems achieving their goals, especially when they have plans as big and exciting as their urban-village projects.

“Throughout our history, we have provided leading edge retail, office and residential facilities when the need was there, and we’re still doing that,” beams Hill. “We’re proud to have played a major role in the growth of both Saskatchewan and Alberta.”