In 1968, Art Helm, founder of Helm Welding (1983) Limited, began a small welding, repair, and machine shop based in the small community of Lucknow, Ontario. As his reputation grew, he expanded his business to manufacture snowblowers, wagons, bale stookers, and gravity boxes, as well as services for farm industrial equipment.

Over the years, the Helm Welding product offering continued to expand. Under the Lucknow brand, the company has established itself as a leading manufacturer of strong and dependable agricultural equipment. From its location in rural Ontario, Helm Welding conducts approximately half of its business internationally in 17 countries.

President Kevin Clark and co-owner Grant Helm spoke with The Canadian Business Journal about the company’s history, the Lucknow brand, its thriving international business and the importance of loyal customers.

A History of Designing Exceptional Machines

With each successful decade, Helm Welding has continued to grow and innovate the Lucknow line. In the 1970s, the company added bulk feed storage tanks, grain buggies and mixer feeders. In 1979, its size and manufacturing capacity more than doubled. By 1983, the company was manufacturing snowblowers, bulk feed storage tanks, mixer feeders, wagons, grain buggies, bale shredders and rotary mowers.

In the early 1980s, dairy farmers became aware of the benefits of adopting a total mix ration feeding system. As a result, Helm Welding experienced an increase in the sale of mixer feeders and developed new models and refined the mixer feeder models. In 1998, Art Helm sold his shares of Helm Welding (1983) Ltd. to five employees of the company, to ensure the manufacturing facility and products stayed in Lucknow.

In the late 1990s, the company predicted the rise of vertical auger mixers and added them to its product line. Demand for the mixers quickly rose, and the machine became one of Helm Welding’s best selling products.

In the mid 2000s, the company developed its new material handler for the purpose of spreading sand for cattle bedding. However, its customers discovered additional uses for the product and began buying it for landscape work and golf course maintenance. In 2010, Helm Welding added rotary tillers and multi-purpose blades to remove snow and maintain yards.

Products Made for the Customer

Helm Welding strives to produce quality and dependable products that go above and beyond the competition. To do this, the Lucknow brand is designed to meet the particular needs of its customers. Each of its products is available in a wide range of model sizes, with their own different purpose for the end user.

While offering a range of products, one of Helm Welding’s best known products is its feed mixers. In today’s competitive market, choosing the right mixer is an essential ingredient for success. Helm says the company offers customers the most affordable and dependable mixer on the market, with numerous models and options, ranging in mixing capacities of 150 to 900 cubic feet.

“Quite often our mixers, whether it be for feed or compost, are made to the specs a customer requires,” he explains. “Rather than have a particular mixer and having a customer adapt to our machine, we try to work with what the end user needs.”

“We probably make one of the heaviest built, strongest mixers on the market, but it is competitively priced with the higher end units of our competitors,” Clark adds.

Today, Helm Welding conducts approximately 50% of its business internationally, with the majority in the United States and Japan. The company also sells widely in South America. In fact, as business grew in the south they hired a Spanish-speaking sales representative in Miami, Florida. It also has a representative based in Japan. Its international business has helped it grow into a multimillion-dollar company with products in 17 countries in total, including the Cayman Islands, Germany, China, Italy and Israel. Its snowblowers are also found in Japan, Iceland and Greenland.

As a small-sized company, with 30 to 40 employees depending on the season, Helm Welding plans to continue to grow. It is particularly focused on increasing the sales of its heavy duty snowblowers and compost mixers. However, Clark says the company is also looking to streamline its production line.

The company prides itself on superior design and exploring new ways to innovate and improve the quality of its products. “We’re always working on new projects. In our slow time, we’ll work on different projects and new items to put on the market,” Clark explains. “We’re currently looking at a bale chopper, redesigning one we made years ago, which we want to improve on. We are also looking into producing some lawn sweepers and flail mowers.”

Right now Helm Welding is manufacturing a mixer with four doors for a customer in Florida, which is a prime example of how the company services a customer’s specific requirements. This practice is what Clark says has kept customers coming back over the decades. He says the company operates on the philosophy that a first sale is good, second and third sales are great, but fifth and sixth sales should be the company’s goal.

While the community of Lucknow plays a significant role in the company’s identity, the rural location presents a challenge when shipping products to the farthest reaches of the globe. Clark explains that the products are loaded in a container and shipped to Toronto, where the train takes them across the country to a sea port to be loaded on a ship, if they are going abroad.

The company continues to prosper and remains committed to offering the best selection of agricultural equipment. “We’d like to thank all our customers who have supported us and we hope they can continue supporting us in the future,” Helm adds. 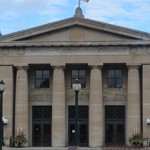 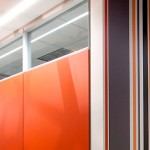