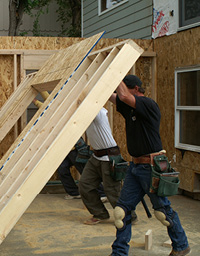 This is how the phone conversation started one afternoon.  Of course this was after the usual greeting and normal phone etiquette, followed by “Alex we need your advice!”   Those are the words that make you feel important and boost your construction knowledge ego.   Of course, I, always feeling the need to offer advice, was happy to oblige.

As the conversation went on, the woman on the other end of the line relayed her situation and concerns to me.   She told me, the home she bought at the pinnacle of the real estate market was now too small for her family.  She went through great length and elaborated how the house that was once considered their starter home, now needed more space due to the addition of two children to the family.

“This was supposed to be a short-term home that was supposed to catapult us into a larger home for us to raise our family,” she said.  “We are unable to sell our home as our Mortgage is more than the house’s current value.”

With a little hesitance, she said the family liked the neighborhood and could see themselves living there longer term but needed to address the lack of square footage the family now demanded.   I relayed to her that I understood and could relate to her concern which put her at ease.  She told me, her husband mentioned the possibility of adding a second story and I did agree that it was a viable option, however, it could be potentially the more expensive option.

There was a brief few moments of silence and then several inquiries by me to see if she was still on the phone.

Now the listening part on my behalf was over and it was time to dispense my advice as if I was an old soothsayer.   I began to ask her a series of questions, finding out more about the house and property while taking notes. My goal ultimately was trying to determine whether to Build Out or to Build Up to create more square footage to meet the growing family’s needs.  There are many factors to be considered and we first needed to determine what the additional square footage was to be used for.

Most often the need is for additional bedrooms sometimes accompanied by additional space for a bathroom.  There is often the need for additional space to create a home office or recreation room.  The most cost efficient way to create this new space it to Build Out providing the property could accommodate the additional structure.  Prior to moving forward with this option, it is important to review the property lot size and how the house is situated on it.  This also involves consulting with your local municipality to determine the property setbacks.   The property setbacks determine how close you are able to build to your property lines and knowing this information is vital to giving you options.   In some cases your local municipality may grant a variance to build outside the designated setbacks.

There are many other advantages to Building Out versus Building Up besides the costs being lower.  Building Out is almost always less invasive, meaning the family’s normal activities within the home would be minimally disturbed as the majority of the work on the new structure is completed first enabling it to be water tight and secure prior to creating the new entry point connecting the two spaces.

When Building Up, based upon the location of the new structure the family most often will need to move out of the home once the construction begins.  This also consists of relocating furniture and personal possessions especially in the area directly below the proposed second floor.  Once the construction of the additional floor begins, the home often quickly becomes unsecure and open to the elements.  This is where “time is of the essence,” as it can often takes months before the dwelling is again secure and weather tight while the new support posts, beams, floor system, walls, and roof, are constructed.

Since the house will be open to the elements for duration of time, it should be discussed and placed into writing who will cover the expenses should damage, theft or vandalism occur from this exposure.  It should also be discussed as to what measures the Contractor will take to be proactive in attempting to minimize this exposure.  Since weather can play a role in the construction process, you will want to consider the time of year that will be optimal for commencement.

In most cases, Building Out will require less engineering and design, minimizing the professional fees in these areas.   When Building Up, more engineering is required by the Architect to ensure the second floor is structurally sound and complies with local Building Codes.  This usually consists of strengthening up the foundation, the addition of support columns and beams to ensure that new load added above is supported and distributed properly.   There is always more time spent designing the new second story to ensure it aesthetically coincides with the rest of exterior of the home.  In extreme cases the entire exterior façade of the existing house is changed due to the new additional square footage added above.

Since the existing house’s finished walls and ceilings conceal the majority of the existing framework, plumbing and electrical, Building Up offers challenges to the contractor when estimating.  There will almost always be in the Construction Agreement a clause detailing “Unforeseen” conditions.  When Building Up, it can be expected that this clause will be executed leading to additional project costs.  Assume this, at least until “X-Ray Glasses” are invented to allow us to see through the walls and ceilings.

I tell clients there are only a few reasons to consider Building Up.  Build Up if you absolutely need the additional square footage and you are unable to Build Out.  Build Up if the house is built on valuable property and the additional structure will enhance the value of the house significantly.  Lastly, Build Up if that is what you absolutely want to do and plan on living in the house long term.  Building up does have its advantages; however, my advice is to Build Out whenever possible.