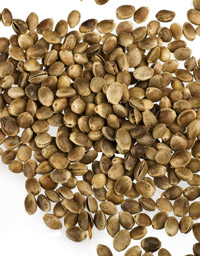 The seed you need

For thousands of years, hemp has been grown for seed, oil and fibre uses. Hemp has been purported to have some 25,000 different uses including food, textiles, paper, rope, bio-fuels, lubricants, building materials and paint, to name a few. It’s interesting, then, that Canada only recently started growing again, after a 60-year hiatus.

In 1938—one year after the United States—Canada passed legislation that made all forms of cannabis sativa illegal, including hemp, even though its THC content (the active ingredient in marijuana) is very low. In the 1990s, science has advanced to a point when the nutritional benefits of hemp seed and hemp oil couldn’t be denied. At that time, several groups in Canada banded together and lobbied the government who ultimately allowed crop trials for industrial hemp. The trials demonstrated that farmers could grow hemp with less than three per cent THC. That’s when hemp got the green light once again.

Hemp Oil Canada was started in February 1998, one month before Health Canada re-legalised the cultivation of industrial hemp in Canada. “I thought it would be a great opportunity, from an entrepreneurial perspective, to get involved with something that was truly a ground-floor experience,” says Shaun Crew, founder. “No one had processed hemp seed and produced hemp food products in over 60 years.” With the federal and provincial governments on his side via grant dollars, Hemp Oil Canada got a lot of support in getting the industry up and running.

“I knew at that beginning that the big companies wouldn’t want to get involved with it yet, because hemp was stigmatised,” Crew adds. “But what I saw was a product with all kinds of health benefits. It was also great timing because natural food products and supplements were just coming into the market.

Starting the business wasn’t without its challenges. We had to create new products with new processes and sell to new markets. We started from zero. But slowly, we started to make an impact.”

Whole hemp seeds contain approximately 25 per cent protein, 31 per cent fat (made up of Omega 3 and 6 fatty acids), and 34 per cent carbohydrates. In addition, hemp seed oil provides an adequate supply of antioxidants (Vitamin E), carotene (precursor to Vitamin A), phytosterols, phospholipids and a number of minerals, including calcium, magnesium, sulfur, potassium, phosphorus, along with modest amounts of iron and zinc. Hemp seed oil also provides a good source of chlorophyll.

“It’s easy to incorporate hemp food products into one’s diet,” says Crew. “It’s not like you have to hold your nose and take a teaspoon of something like fish oil. It has a nutty flavour and can be used in sauces, dips, marinades and dressings. All the seed products can be used as you would use any nut or seed in other recipes. It’s easy to consume, which is why people are gravitating to it.”

Growing with the market

As one of the first businesses involved in this industry, it has taken 12 years to get Hemp Oil Canada really rolling. “I have always believed that you need to walk before you run,” maintains Crew. “We have grown as the market has demanded. We started with no market, but we have continually grown since then—at least 20 to 25 per cent per year, and some years as much as 40 per cent. We have had to be cautious with how quickly we have expanded; we haven’t sought a lot of outside investment in the company, so it’s been a bit of a challenge, but we have stayed focused.”

Crew believes the company is positioned to continue to see double digit growth every year, for as far ahead as he can see. “What we’re doing is catching on,” he says. “We’re seeing more multinational food manufacturers interested in these ingredients, and the consumer is demanding healthier products. It’s a new taste and texture that also delivers the health aspect. It’s not filler, like a lot of what North Americans eat.”

Hemp Oil Canada is determined to bring hemp food products into the Canadian mainstream by promoting greater public awareness about the exceptional, nutritious and healthy composition contained within the hemp seed. So far, so good, but this company looks to have even more potential under the surface.