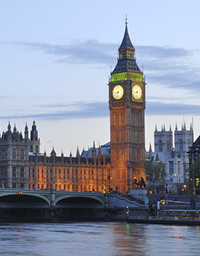 Gordon Campbell, Canada’s High Commissioner to the United Kingdom of Great Britain and Northern Ireland, was home recently to deliver a keynote address to the Toronto Board of Trade where he outlined the vast potential business opportunities that await Canada – if we take full advantage of them.

Campbell is a well-known public figure having served as the premier of British Columbia from 2001 until his retirement from politics in 2011; prior to that he served as mayor of Vancouver for three terms beginning in 1986. He has held his current position since September 15, 2011. At the forefront of his speech at the business luncheon was the European Union Comprehensive Economic and Trade Agreement (CETA) and the immense potential for this country.

In relating to the enjoyment of his new post, Campbell passed on a very humorous story about the difference between ambassadors and high commissioners. He noted that ambassadors are taken to Buckingham Palace to meet the Queen in a carriage drawn by two horses. A high commissioner gets taken by four horses.

“Then I discovered something new,” Campbell smiles. “I’m a realm high commissioner. Her Majesty is our Sovereign too. When I go to the United Kingdom – she’s already appointed me, so I’m not presenting my credentials to her; she’s already decided I’m her person there. So, not only don’t I get a carriage, and I don’t get any horses; I think I may well be the first High Commissioner in the history of Canada-UK relations where you actually get taken to Buckingham Palace in a Ford.”

All kidding aside, Campbell is ecstatic about his new position and says he is enjoying every minute of it.

“It’s an incredible opportunity and a great gift to be able to work on behalf of all of Canada in one of the truly great cities of the world,” he says. “London is a phenomenal city.”

A key aspect Campbell also pointed to was the rich historical background between Canada and the United Kingdom. He believes our nation is in a prime spot to increase its international presence and making a stronger mark in Great Britain is the best place to do just that. The Secretary of State for the UK William Hague has said economic strength has a direct impact on your influence in international affairs, and Canada’s strength is about as good as it gets when compared with other nations in the developed world.

“It is very highly successful in terms of G8 position,” Campbell says. “We are recognized for our political leadership – Prime Minister Harper, Finance Minister Flaherty and Mark Carney (Bank of Canada Governor) are respected in the international financial community for the work that they have done and never lose track of the fundamentals of a sound economy.”

To further accentuate our glowing international status, Forbes Magazine has called Canada the best country in the world to do business thanks largely to such factors as our tax regime, technology and innovation, the way we protect investors, our stance on corruption and a lack of red tape – at least when compared to the seemingly endless bureaucratic slowdowns plaguing many other nations.

Whenever the topic of international economics is discussed, our country’s natural resources invariably are mentioned – and with good cause.

“While the United States is maybe our most important friend, the United Kingdom is our best friend and they’ve been there the longest,” Campbell states.

“As you walk around London you will find parts of our history connected directly into the streets, buildings and towns and it’s something we can’t overlook because it’s not necessarily always in the news.”

It’s been a long and painful slowdown for Great Britain and a significant part of Europe as many of those countries such as Greece, Ireland, Portugal, Spain and Italy continue to struggle for economic survival. Campbell believes that part of how allies can help one another is for countries such as ours to reach out and help struggling economies reach their goals and objectives. Leaders of those European nations keep kicking the problem down the road, but the inherent problem is that each time the road is getting shorter and shorter – and there’s a huge cliff at the end.

“What we often hear from Europe is the need to get into a position of wealth creation as well as debt reduction or austerity,” Campbell states. “The problem is that often wealth creation translates into more debt. I think one of the fundamentals we all have to understand is: you don’t get yourself out of a debt hole until you stop digging.”

Campbell says one of the challenges is to add economic activity to create a sense of hope and opportunity that is vital to the social stability of a country.

“The Comprehensive Economic Trade Agreement is an opportunity for us to help create wealth not just in Canada but in Europe – and it’s a significant one,” Campbell continues.

In that vein, he says it always amazes him when he comes across some people who don’t see the true value ensconced in international trade and the massive benefits associated.

“I have difficulty understanding people in Canada who don’t get that without international trade we would have a substantially lower standard of living and quality of life,” Campbell declares. “We have over two dozen sawmills in British Columbia, with hundreds of people working at those sawmills. If we didn’t have trade, we would probably have enough to man for one.”

With respect to mining, we don’t have enough people to take full advantage of the industry so we have to have international trade to drive economic activity and growth.

“Without it, we probably wouldn’t have been a country to start with,” Campbell opines. “Trading furs got Canada put on the map.”

There has been a concern by some that our seeking out alternative trading partners won’t benefit our relationship with the United States, but it’s a flawed concern.

“We’re not the only jurisdiction in the world looking for trade agreements,” Campbell notes. “Every country – including the United States – is negotiating with other potential partners in that country’s best interests.” In other words, all other countries including the U.S. aren’t standing pat, so we better not either or face the real possibility of being left behind.

He went on to say that it’s crucial for Canada not to ever take its strengths for granted, but rather always continue adding to that strength in order to develop new potential markets with which to expand our economy. As of 2012, trade accounts for about 60 per cent of Canada’s gross domestic product (GDP).

There are naysayers who would no doubt ask the question as to why Canada would bother trying to attract trading business with a number of faltering countries in Europe – but the answer is quite simple: Europe has the largest integrated economy in the world at $17 trillion and it represents a $2.4 trillion procurement market.

“If we’re successful with the Comprehensive Economic Trade Agreement we’ll be one of the very few jurisdictions in the world that has a special trading relationship with the European Union and the United States and new trading relationships that are building in Asia, all of which are beneficial to Canadians.”

As of now, our trade deal with the European Union, which began in 2009, comes in at about $116 billion. Campbell is of the firm belief that figure can be increased tremendously, and having the country work as one cohesive unit to achieve that goal will make it that much more likely.

“It’s the first major trade agreement where every province has been included at the table as the federal government went through the negotiations,” Campbell reveals.

The trade agreement by which all others will be measured here in Canada is the North American Free Trade Agreement (NAFTA). It’s a pact that has created about 4.5 million jobs since its implementation in 1994 and has been responsible for substantially increasing our GDP on an annual basis. This year, it’s expected NAFTA will account for an additional 80,000 jobs from coast to coast.

The potential is to open up many new avenues rather than the traditional natural resources path that we’ve become somewhat accustomed to seeing. The types of industries that would benefit: civil aerospace, agri-food, clean-tech, life sciences, information and communication technologies – all of those things including engineering, manufacturing, global energy and financial services. Campbell says we as Canadians need to recognize our global importance and be assertive in showing the rest of the world what we can do.

“We have to learn to celebrate what we’re doing well,” he notes. “Canada is recognized as the No. 1 public-private partnership jurisdiction in the world. It doesn’t mean we’ll be sending pipefitters from Ontario going to the U.K. or western Europe. It means that we will provide them with the software they need to make sure they can put pipefitters to work in a way that gives them the best value for their taxpayers and gives them the opportunity to create the type of infrastructure they need.”

The Ontario manufacturing sector is currently exporting more than $20 billion in goods to the European Union every year, and it’s widely believed that figure has more room to grow. Atlantic Canada’s seafood industry would be given a significant boost through CETA as would Quebec’s agriculture, research and development and timber sectors and the renewable energy and environmental services industries in B.C. Those are just several examples of how Canada can stand to benefit in such an agreement. It`s all about maximizing potential.

“We are a three-ocean economy – the Atlantic, Pacific and Arctic. Each of those oceans create opportunities for us. But if we put barriers to the opportunities we shouldn’t be surprised if we can’t deliver them to the people we work on behalf of and that we serve. I think the Comprehensive Economic Trade Agreement with the European Union is an important step into the 21st century.”

Many financial economists believe this pact could result in the same amount of economic benefit for Canada as NAFTA has provided over the years. It’s an opportunity not to just move Canada forward but to create wealth, opportunity and jobs in our homeland.

“The greatest strength we have is the people who live here,” Campbell suggests.

Campbell also is in the very unique position of being front and centre in two Olympic games. He was premier of British Columbia when the Winter Olympics were held in Vancouver and Whistler in 2010 and now he is in London for his job with the Summer Olympics being held there this month. He was asked how preparations leading up to the London Games compared with that of Vancouver two years ago.