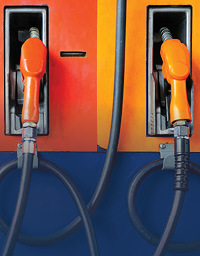 Prepare to pay a pretty penny at the pump, as is the story according to experts, with the cost of oil seemingly increasing by the day.

According to reports, the price of gasoline has increased 23 per cent since September 2010. The cost of a barrel of oil also continues to climb—in part given the unrest in Libya—and, with that, as is the cost the ordinary Canadian citizen is now paying at the pump.

As of this writing, prices across the Greater Toronto Area near $1.35 a litre, a far cry from ‘acceptable’, but also short of 2008 figures that exceeded $1.40 a litre. Many analysts project a similar future gouge could wreak havoc on Canada’s moderate economic recovery. At the pump, the cost of a barrel of oil continues to soar, only weeks ago trading at a 30-month high, above US$108 a barrel.

But is it too easy to continually blame the Middle East for the constant concerns with gas pricing? Since that September 2010 date, the value of the Canadian dollar has grown by about eight per cent, offsetting little in this price differential. So is it still plausible to shop around the next time you go to fill up? Not according to some analysts, who believe refiners have too much power to lessen supply in order to create a price hike.

“Each time the price of gasoline increases, some consumers immediately point to the potential for collusion or price gouging amongst oil companies. Numerous government investigations over the years have failed to turn up any such evidence. Prices are determined at each level by the laws of supply and demand,” Michael Noel, an Economist at the University of California, tells MSN Money in a report.

According to the report by MSN Money, the four contributing factors to the price of gasoline are the cost of crude oil (about 70 per cent of the cost), tax, refining, as well as distribution and marketing.

“One reason that gasoline prices are volatile is that demand is relatively insensitive to price changes. Overall, people just keep on driving to work, no matter the pump price,” Noel added.

Meanwhile, the International Energy Agency has issued its warning flag that such high prices could damage the demand for oil. Added Martin King, Analyst with First Energy Capital Corp., “My whole impression is that this market is trying to avoid, where it can, a repeat of 2008, because that’s not what the crude oil market needs and the global economy doesn’t need that either.”

These projections are based on the current demand for crude oil, its price having already exceeded $100 a barrel. Less than three years ago, in January 2009, a barrel of crude oil cost about US$32. Similarly, the cost of one Canadian litre of gasoline was just above 80 cents.

Craig Alexander, Chief Economist for TD Bank Financial Group, says it’s the higher gas prices that are hitting Canadians hardest, though he notes the rising cost of oil is a double-edged sword for Canada and its economy.

Energy prices, notably gasoline, have been the main contributors to the annual inflation gain. According to the report, gas prices were 18.9 per cent higher in March than a year ago, fuel oil was up 31.3 per cent, electricity costs increased by 4.3 per cent, and transportation costs, which include a heavy gasoline component, jumped 6.6 per cent.

Other reports indicate that such a market could greatly impact the summer vacation plans of many Canadian families. With gas prices not immediately expected to decrease, the high price of gas could force summer travel to the sidelines.