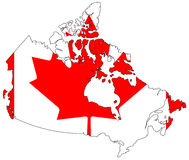 CBJ — The International Monetary Fund expects Canada’s economy will improve compared with last year, but not as much as the Bank of Canada predicted last week following unexpectedly robust growth on several fronts.

The Washington-based organization continues to estimate Canada’s gross domestic product will grow by 1.9 per cent this year, unchanged from its previous forecast.

By contrast, the Bank of Canada projects the economy will expand by 2.6% this year, up from its previous estimate of 2.1% growth.

The central bank cautioned, however, that Canada’s economy might be unable to maintain the pace set in early 2017.

The Bank of Canada also lowered its estimate for next year to 1.9%, below the IMF forecast of 2.0%.

The International Monetary Fund’s most recent world economic outlook provides little analysis of Canada’s performance but notes that it stands to benefit this year from improved commodity prices and a stronger outlook for the U.S.

“The expected growth improvements in 2017 and 2018 are broadly based, although growth remains tepid in many advanced economies, and commodity exporters continue to struggle,” the IMF says in a report.