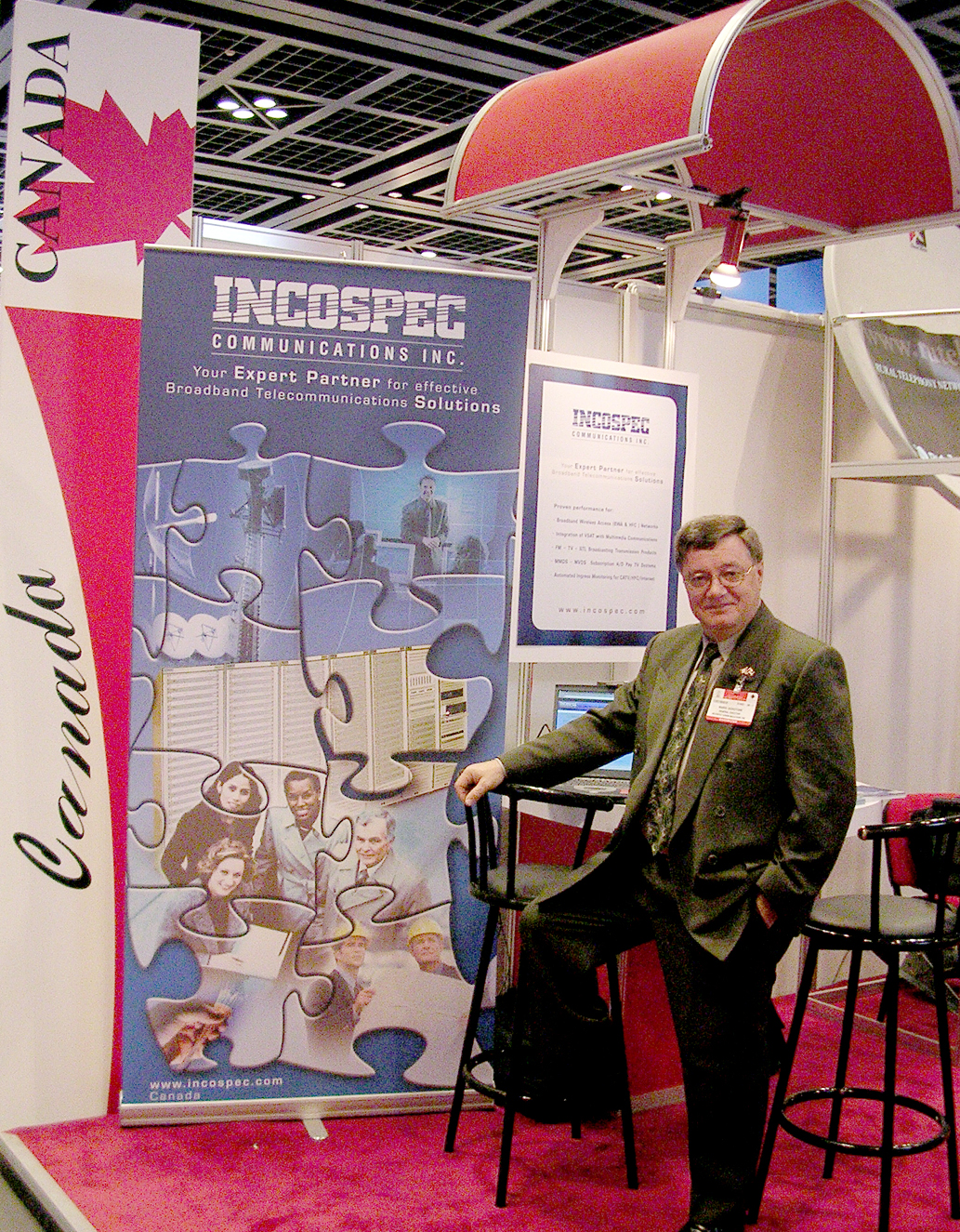 All the Right Signals

Laval-based communications company Incospec Communications has had to evolve rapidly over 34 years to keep up with the transmission technology and services it provides.

Based in Laval, Que., just north of Montreal, Incospec Communications provides video, audio and data processing and distribution technologies for terrestrial broadcast, cable, optical, satellite, telecom and wireless networks. Its name stands for ‘Independent Communications Specialist’: a definition that still applies today, although the company’s functions have changed significantly since owner Mario Sebastiani founded it in 1978.

The company’s first operation was providing proof of performance testing for CATV (Cable TV) networks. This led to providing repair services for Headend (the master facility for receiving cable television signals) and network equipment, and later selling CATV equipment. “First we diversified into the satellite industry, providing C & Ku band satellite earth stations to all of these cable operators in Quebec and Eastern Canada,” says Sebastiani.

“But with the advent of fibre technologies in the 1990s, a lot of these communities could be connected using optical transmission, meaning a lot of these satellite dish antennas would no longer be required… That’s when we started to look at the international market, and began promoting broadband wireless access using the MMDS technology (multichannel multipoint distribution service). We also diversified into FM Radio and TV broadcast.”

Incospec Communications operates three main divisions. The first resells telecommunication equipment to the cable operators, broadcasters and private enterprises within the video/audio encoding/processing and distribution sector. The second provides integration projects for digital transmission of video/audio and high speed data. The third repairs equipment for the cable and broadcast industry.

Sebastiani’s son, Louis Sebastiani has joined the company in 2004 as the company began to diversify into digital technology and IPTV (Internet Protocol Television) projects. Together with the 11 other full-time employees, most of them trained engineers or technologists, this trained lawyer helped bring the 34-year-old communications company into the digital age.

“Today we are one of the leaders in the IPTV integration and the analysis and understanding of the MPEG video transport streams on the video side of the business,” adds Sebastiani. “Anything that involves compressed video or data transport – using optics, microwave, coaxial cable and CAT 6 Ethernet – is our expertise. That includes all the instrumentation required to verify the quality of signal. We specialise primarily in broadcasting high-quality, live video, with heavy broadband or high speed requirements.” Incospec has witnessed numerous changes in the multimedia industry in the past 34 years. With only 12 people, they combine nearly 200 years of industry expertise. “We never lost our RF roots”, says Sebastiani. “Our vast experience in different technologies allows us to tackle complex projects. Very few organizations have the kind of know-how we have acquired”.

Incospec has built up a large portfolio of varied projects, both domestically and internationally. One of its earliest projects was the design, supply, installation and commission of Canada’s first Cancom (later Shaw) LPTV (low-power television) system in 1981.

In 1999, the company provided the Headend and hybrid fibre/coaxial (HFC) network for Qatar Cablevision. “Providing the first 100 PAL B/G analogue network in the Persian Gulf was quite an accomplishment, because back then the optical lasers were only available with up to 750 Megahertz [MHz] of bandwidth,” explains Sebastiani. “We needed 860MHz, so we had to work with another Canadian company to select optical lasers that would reach the required bandwidth.”

Despite this achievement, this technology became somewhat out of date, and last year Incospec Communications returned to Qatar to convert the analogue network to a digital network with SD and HD TV services.

The company became deeply involved with IPTV technology in 2007, during a project on Reunion Island (a French territory in the Indian Ocean, near Madagascar), working on the contract to design, supply, install and commission the digital Headend portion of Intercable Reunion’s distribution network, as well as train its personnel. In the past 5 years, Incospec has also provided training for different cable companies in the Caribbean including Cable Bahamas, Columbus and OneLink Communications.

During the initial phase of the conversion from analogue to digital of the over-the-air TV stations completed by August 2011, Incospec played an active role as a value-added-reseller (VAR), integrator as well as providing training including the supply of microwave links, encoders, MPEG analyzers, PSIP generators, combiners and TV transmitters to 25 per cent of the Canadian market, including two of the four transmitters located at the CN Tower.

Furthermore, Sebastiani proudly clarifies that his organization was the only one to enjoy this market share as a VAR, the other 75 per cent of the market was shared primarily amongst some reputable manufactures like Harris and Rohde & Schwarz.

Over its 34 years of operation, even as the technology at its core evolved, Incospec has held to its motto of “serving the industry with pride, integrity and commitment since 1978,” and the Incospec team is ready for the new challenges of multi-screen and over the top (OTT) video distribution. As long as it continues to keep up with the relentless march of technology, this ethos should continue to take it far.