Increasing Efficiency in the Aviation Industry 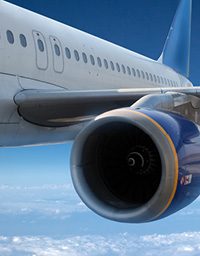 Minister of Transport Steven Fletcher and Minister of Environment Peter Kent have announced the release of Canada’s Action Plan to Reduce Greenhouse Gas Emissions from Aviation. The announcement was made at the Canadian Aviation and Space Museum as part of Environment Week.

Canada’s Action Plan was developed by the federal government and the Canadian aviation industry in an effort to increase efficiency and improve environmental performance.

“This plan is good for the economy and good for the environment; it brings together the joint efforts of the aviation industry to increase fuel efficiency, reduce environmental impacts and protect the long-term health of Canadians,” said Fletcher. “We are working together to reduce aviation emissions and lower fuel costs.”

“We have a plan and continue to make progress on reducing Canada’s GHG emissions,” noted Minister Kent. “We are one-quarter of the way towards meeting our Copenhagen target.”

At the heart of the matter is that this new Action Plan will contribute to the delivery of our nation’s clean air goals and forms the basis of Canada’s response to the International Civil Aviation Organization’s (ICAO) Assembly Resolution.

The target set out by the industry and the federal government is to improve fuel efficiency by an average of at least 2 per cent per year over the next eight years, which will greatly assist in Canada’s efforts to reaching its goal of reducing greenhouse gas emissions by 17 per cent from 2005 levels by the year 2020.

The 2 per cent marker is in line with ICAO’s global targets and will be achieved through specific measures, such as fleet renewal and upgrades, more efficient air operations, and improved air traffic management.

The Resolution, adopted in October 2010, set voluntary goals for international aviation emissions and encouraged member states to submit national action plans by June of this year outlining their respective policies and actions.

The Action Plan builds on the success of the world’s first voluntary Memorandum of Understanding between Transport Canada and Canadian airlines to reduce greenhouse gas emissions from aviation, which has been in place since 2005. The agreement set a goal of a 1.1 per cent average annual improvement in fuel efficiency for each year to 2012, a cumulative improvement of 24 per cent, from a 1990 baseline. The Air Transport Association of Canada and the National Airlines Council of Canada report annually on progress achieved under terms of the agreement.

As of 2010, the industry has achieved a 1.9 per cent average annual fuel efficiency improvement since 1990, or a 31 per cent cumulative improvement, surpassing the objectives of the agreement.

The Canadian and American federal governments have agreed to new rules and regulations regarding air cargo security in both countries. Minister of Transport Denis Lebel and James Nealon, Deputy Chief of Mission at the United States Embassy, made the announcement.

As part of the new agreement, cargo shipped on passenger aircraft will now be screened just once for transportation security reasons – at the point of origin – and will not need to be rescreened prior to upload on an aircraft in the other country. The new procedure is expected to greatly reduce delays and the associated economic costs of having the same cargo go through the same screening process a second time.

“With our vast geography, Canada’s economy relies on the safe and efficient movement of goods by air,” noted Lebel. “Mutual recognition of air cargo security programs will improve efficiency and cut costs for businesses and consumers on both sides of the border.”

Almost half of all air cargo is shipped on passenger planes in this country, which is the most effective shipping method, considering Canada’s immense size and unique geography. Last year, about $100 billion in goods were imported and exported by air.

“The mutual recognition of air cargo security programs is just one of the first initiatives in the Beyond the Border Perimeter Security and Economic Competitiveness Action Plan announced by Prime Minister Stephen Harper and U.S. President Barack Obama,” added Deputy Chief of Mission, Nealon.

“Through this program, we will be able to move goods between U.S. and Canada faster, more efficiently, and most securely.”