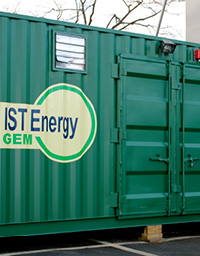 The new approach to clean energy and waste removal

Speaking to Stu Haber, President and CEO of Infoscitex Corporation, is an education in the world’s waste problems and solutions.

“Every year, 250 million tonnes of trash is produced in the United States alone,” Haber says. “A third of that waste is recycled, leaving 135 million tonnes a year to end up in landfills.”

There is a problem with waste management that borders on crisis, and Haber, with Infoscitex, has worked diligently for the greater part of the last decade to finding an environmentally beneficial and economically attractive solution to waste management.

Infoscitex, a Massachusetts-based Research and Development Engineering company, provides technology solutions and services for defense, aerospace, security, life science, energy and environment customers. With an established record of developing technologies from concept-to-reality and delivering high-value technology solutions, the company has grown to employ 125 full-time employees and in 2010 saw revenue of $34 million.

The product is an evolution in the sense that garbage disposal is all but eliminated (and the commensurate cost and pollution) and clean energy is produced. Infoscitex saw that the GEM has “tremendous commercial application” and IST Energy Corporation was formed as a subsidiary of Infoscitex to fund, develop and transform this exciting application into a reliable and robust commercial product. Having worked hard to balance economy of scale, the first GEM has been operating at the company’s Waltham, Massachusetts headquarters and is scheduled for operation this year at Edwards Air Force Base in California.

Infoscitex got its first major boost of confidence—and funding—from no less than the United States Department of Defense (DOD), which was interested in a compact waste management system for bases stationed around the world.

The DOD was interested in finding a solution for all the waste they had in the field, in particular, Iraq and Afghanistan. Waste disposal costs a lot of money, fuel, and manpower, but it also alerts the enemy to soldier camps. The army also uses burning pits, essentially open pits which cause health issues for the soldiers. “So we were trying to help find a solution that saves some money and also protects our soldiers,” says Haber. “The GEM addresses all of those needs.”

What makes the GEM revolutionary is that it is the first commercially available compact waste-to-energy conversion system, making it ideally suited for on-site installation at any location disposing of at least two tonnes of trash daily. In addition to eliminating 95 per cent of daily consumer waste, such as paper, plastic, food, wood and agricultural materials, the GEM doubles as a clean energy producer. IST Energy has a patent-pending process that converts the trash into small pellets that are, in turn, converted into electricity and gas heat.

“There are many waste-to-energy systems available but no one actually has a working compact, onsite system,” says Haber.

Other waste-to-energy systems work on a large scale, such as those located at large municipality-size waste facilities which process hundreds or thousands of tonnes daily. They are located at central locations to where waste is hauled, and put through an incineration or gasification process.  The GEM’s technology, “downdraft gasification”, is a much cleaner process than what is normally used at municipality-sized plants. The GEM is considerably smaller, works on-site at individual facilities, handles three tonnes daily, and at 48 feet long, 9.5 feet high and 8.5 feet wide, it takes up less space than some of the dumpsters that hold the trash.

Most importantly, says Haber, “These large plants still require waste to be transported in, pumping pollutants into the environment. The GEM is eco-friendly and carbon negative, significantly diminishing greenhouse gases by 1,090 tonnes annually. The GEM also powers itself with the clean energy it produces, supplying users with a self-sustaining alternative energy source.”

IST Energy is directing its marketing towards hospitals, colleges, arenas, stadiums, prisons, industrial plants… places that generate the waste and want to avoid paying the cost of disposal. “We take 95 per cent of a customer’s waste and turn it into energy. That is what is completely different; it is a reliable system that can handle waste disposal and energy conversion on-site.”

By enabling on-site trash elimination, the GEM reduces the financial and environmental burdens of trash removal. One unit processes up to three tonnes of waste daily, providing the energy to power and heat a 200,000 square foot building housing more than 500 people—all in all reducing annual waste disposal and energy costs significantly and at a unit cost of $1.1 million, provides a return on investment between three and nine years.

2011 is a milestone year for the GEM and IST Energy in which years of research and development have led to producing a robust and reliable GEM for customer acquisition. Haber estimates 5 to 10 units will be sold this year and is working to make IST Energy a billion dollar company in five years. “At 1,000 units a year, or 83 units per month, it’s not an unreasonable goal. The market is there, and it can be achieved if we work diligently and smart . . . and have a little luck.”