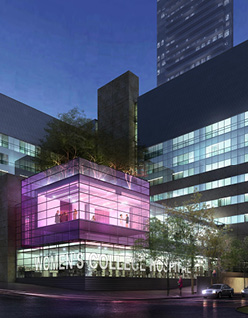 Infrastructure Ontario (IO) has brought more than 50 infrastructure projects, worth more than $21 billion to market, helping to stimulate Ontario’s economy, on the provincial government’s behalf. The crown corporation, wholly-owned by the Province of Ontario, is guided by the Provincial Capital Plans, with its work being divided into Project Delivery, Lending, Real Estate Management and Ontario Lands.

IO partners with provincial ministries and agencies to deliver infrastructure projects, which shape the landscape of Ontario and facilitate its growth and prosperity. Infrastructure projects provide, direct and indirect employment and quality of life improvements that are invaluable to the citizens of Ontario.

2011 is proving to be a banner year for IO, which continues to bring to fruition large-scale infrastructure projects in Ontario, including the start of construction for a replacement hospital in Oakville, the largest project IO has brought to market to date. Oakville’s new hospital is just one example of the government’s mandate of providing world class healthcare to its citizens; in fact, Ontario has invested in over 100 major hospital capital projects since 2003, including 18 brand new hospitals that are either completed or in development.

“The hospital project is a significant economic opportunity for suppliers and contractors in Halton Region and the Greater Toronto Area,” says Terence D. Foran, Project Communications Advisor, Infrastructure Ontario. “At the peak of construction, Hospital Infrastructure Partners estimates more than 1,100 workers will be on site daily.”

Foran went on to say the value of the contract with Hospital Infrastructure Partners in today’s dollars is approximately $2 billion. Over the 30-year life of the contract, when adjustments for anticipated inflation are made, the contract value is $2.7 billion. The contract cost covers the design and construction of the facility, building maintenance, life cycle repair and renewal, as well as project financing.

With construction expected to be completed by the summer of 2015, the new hospital will replace the smaller existing Oakville Trafalgar Memorial Hospital (OTMH), which can no longer handle Halton’s aging and increase in population. Built 60 years ago, OTMH was originally designed to serve a community of 20,000 people. Thought it has undergone changes to accommodate the population growth, it has reached maximum capacity. The new hospital will be developed in north Oakville, one of Ontario’s fastest growing regions.

Ontario Premier Dalton McGuinty visited the site of the new hospital on September 22, predicting the hospital will be one of the most advanced hospitals in Canada. “We are bringing healthcare closer to home because this growing community needs it and our aging population absolutely requires it,” said McGuinty.

The new hospital will feature 80 per cent single-patient rooms to reduce the risk of infection and enhance patient privacy and comfort; expanded capacity in all areas including a larger diagnostic imaging department with more CT Scanners and MRIs; a new cancer clinic to provide patient assessment, counselling and chemotherapy administration; a healing environment focused on patient-and family-centered care, amenities to support family involvement; and space for expansion to accommodate growth, medical advancements, and education and training space to ensure leading-edge care is available in Oakville today, tomorrow and the future.

“We are committed to building a new, modern healthcare facility which will enhance the high-quality programs and services we provide to the community,” said John Oliver, President and CEO, Halton Healthcare Services. “Our design team has developed a truly patient-centred environment that will use the latest advances in technology and provide the highest standard of care and services for our patients and their families. This project will absolutely transform hospital healthcare services in Oakville and the Region.”

The construction project will provide a sizeable stimulus to the regional economy by directly and indirectly creating and supporting thousands of jobs. At the peak of construction, the project will employ 300 people from the Toronto area.

In early May, a healthy, seven-pound baby boy was the first baby born at Credit Valley Hospital’s new patient care wing in Mississauga, completed in partnership with IO in March. The hospital’s expansion project increased its size by a third—its capacity increased from 382 to 471 beds and double the number of labour and delivery rooms from seven to 15, while providing additional room for growth.

IO’s work has a direct and positive impact on the people of Ontario. The health and safety, prosperity and quality of life of Ontarians are all improved because of the work IO does.

Ontario’s infrastructure procurement and investments are well regarded within Canada and the world for standard-setting speed and efficiency and set the bar for the pace as which large-scale projects can be completed.

With plans to invest an additional $35 billion dollars into the province’s infrastructure and economy in the next three years, the provincial government will ensure Ontario’s citizens will continue to enjoy a quality of life and global competiveness for many years.

Infrastructure Ontario will continue to play a vital role in helping the province to deliver new and modernized infrastructure across the province, with a proven track record of delivering world class projects on schedule and on budget.