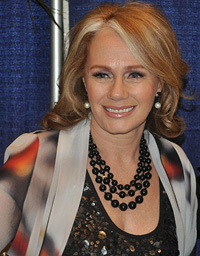 It’s hard to imagine Boston Pizza founder Jim Treliving has the time to be part of another television show, but that’s exactly what he and Arlene Dickinson are doing as co-stars of The Big Decision which airs on CBC on Monday nights.

Treliving and Dickinson are two of the established personalities on CBC’s The Dragons’ Den and are already into their second season of The Big Decision.  The Canadian Business Journal was invited to sit in one of the episodes to air this fall.

With loose similarities to The Dragons’ Den in that it’s all about businesses and entrepreneurs attempting to procure financial support, The Big Decision is a reality TV programme based on the premise of having Canadian companies seeking out the assistance of Treliving or Dickinson.  Their help comes in the form of advice and funding, if they like what they see.  The series debuted this past March with four episodes, two with Treliving and two with Dickinson with the result being very favourable critical acclaim.  Due to the success of those four initial episodes, CBC ordered up a second season with six episodes, evenly spit three and three, airing this fall and into the winter.

The day CBJ was on hand to partake in witnessing the taping of the programme it was Treliving who was called to duty to scrutinize a southwestern Ontario company called Radix Controls, based out of Windsor.  Founded in 1994 by Ross Rawlings, the company has about 30 employees of engineers, mechanical designers and software specialists who specialize in advanced technology solutions for industrial applications and automation, with the goal of improving quality and effectiveness for manufacturing facilities. Radix Controls now serves the manufacturing sector in both North and South America, providing solutions incorporating custom software for process control and management, vision, automation, robotics, barcoding, smart cards, PLC’s and packaged software tools.

Treliving is of the belief that other companies can learn from the experiences of those who come on the show. But potentially getting financially involved with what can be a wide array of companies makes it necessary for Treliving to have an exceptional support staff who can advise him as to whether it’s a smart idea to proceed with a partnership or to back out.

What we see on the air is a neat one-hour package, but rest assured much more time and effort goes into making “The Big Decision” whether or not an investment will be forthcoming or not.  It can be intensive, but it’s something Treliving enjoys.

“I look at the deal and take it to my guy and we’ll then analyze all the stuff in a group and analyze what’s involved cost-wise, what the future is for how much money you need because for every type company I’ve ever looked at the nice investment seems to be half a million dollars but that isn’t where you end, it’s usually a lot more than that and that’s what we look at – where does this have to go if we have to go across North America and around the world.”

Treliving says he typically makes his decision very quickly as to whether he will or will not be going into a particular business as an investment partner.  Much of it simply comes down to whether or not he wants to be in that line of business.  Another factor for Treliving is determining the company’s ability to expand, and that can sometimes take a couple of months to evaluate.

Despite being a reality television show where investment dollars are at the core of the programme, Treliving says this show is uniquely different than The Dragons’ Den in a number of areas.

“It’s a lot more intense in the fact that you’re by yourself,” he reveals.  “You can’t sort of scoot out and hide from the deal but I look at the deals I know I like and they’re bigger, and that’s exciting to me.”

“This is the first time I’ve spent an entire month just shooting a programme because it has to be ready for September and October,” Treliving smiles.  With 21 episodes of The Dragons’ Den taped in April and May for Season Seven, which begin airing this month, and another batch of six for The Big Decision, both Treliving and Dickinson have spent their fair share of time in front of the camera this year.

During the presentation by Rawlings, he was looking to entice Treliving to see the merits of an invention called Tool Tracker, which has a main functionality of being object tracking technology. Tool Tracker uses sophisticated, high speed visual tracking technology to precisely and repeatedly monitor and report the position and orientation of a hand tool in three-dimensional space within a work cell. Regardless of the size or shape of the tool that is being monitored, the tracking target can be easily mounted and provides the tracking point for Tool Tracker.

“We began development of Tool Tracker back in 2006,” Rawlings tells us.  “It took more than 18 months to hash out all these different ways of doing it (for numerous applications) so actively it’s been in facilities since 2009 and our biggest need heading into this show is having people see what this is and what it can do.  It may seem technical under the hood, but it’s really very simple.”

What’s most astounding is that Rawlings has never taken a computer science class in his life.  It’s all self-taught.  His background education includes an undergrad degree in biology and geography.

“I was up in the Arctic doing research and was fortunate enough to get a job in Germany for a large industrial manufacturer and became what was a hobby programmer to an industrial front-end GUI application developer for a global company for three years and that’s where I saw the needs of the missing pieces of communicating to different industrial devices in the factories.  We had to write machine software common in the front end but crazy in the back end.  After leaving Germany and coming back to Canada I realized there was a big niche missing on how to put Windows-based, everyday apps we use on the factory floor.  It shouldn’t be that complicated to know when a machine needs maintenance or whether a line is running effectively.”

“We at Radix do a lot of advanced, integrated automated systems so we’re trying to find ways that can improve productivity by making a process of building automated systems and handling systems to be seamless and simple,” Rawlings says.

Radix Controls already has a foothold in with many of the biggest manufacturers in the world, including The Big 3 automakers (Chrysler, Ford and GM) as well as Honda and Toyota.

But Rawlings quickly became conscious of the concern about his technology being so focused on the auto sector.  Not wanting to be typecast in one area, he made a solid effort to branch out into food and beverage and pharmaceuticals as well.

“We survived the weak economy over the past several years by being diversified,” Rawlings notes.  “We had more business from pharma that allowed us to stay afloat and now we’re back rolling and the auto sector is booming again – this has been our busiest year ever.”

The ultimate goal is to be successful globally.  Does Treliving believe Radix Controls has that potential to the extent he’d be willing to invest his own money as a partner?  You’ll have to tune in to The Big Decision to find out.