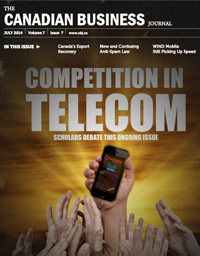 Under the guidance of new CEO John Chen, BlackBerry has been displaying robust signs of life not detected in the struggling smartphone maker in the several years prior to his arrival. Clearly, Chen has a long-term vision and has managed to keep the Waterloo-based company on the right track as it not only looks to regain a prodigious amount of lost territory against rivals such as Apple and Samsung, but also to expand its line of business opportunities in the wireless telecommunications sector. The recent signing of a three-year deal with EnStream to provide a secure platform for transactions between banks and consumers will accelerate those diversification efforts.

Speaking of the telecom industry, this year’s Canadian Telecom Summit didn’t provide the fireworks and theatrics of recent annual gatherings when David meets Goliath, but it was nonetheless quite informative. An impressive group of business and economics scholars from universities across North America held the most thought-provoking panel discussion of the three-day event, debating the merits of having more newcomers involved in the wireless phone sector. Interestingly, there are those who believe convergence is not an issue to be concerned about whatsoever, while others vehemently disagree. While both sides made excellent valid points, I’m still siding with the latter, based on far too many reasons to start listing here.

Remember when RadioShack was the place to go to get all your electronics equipment? Those days seem so far gone. I was reminded of it recently when RadioShack in the U.S. posted a first-quarter loss of $98.3 million as sales ominously tumbled for the ninth straight quarter. Here in Canada, the former RadioShack is now branded as The Source after Bell Canada purchased the assets of InterTAN from bankrupt U.S. parent company Circuit City in 2009.

The country’s office vacancy rate sits at 10.4%. That sounds high, but it’s really not far off the norm when you analyze legacy data. Are more companies downsizing and/or is it an upswing in the number of employees who can work from home in our ever-increasingly digitally connected world that may be impacting on this statistic? Or did developers simply continue building new office space beyond the required threshold? It depends who you ask.

By the numbers: FIFA is expected to rake in $4 billion from the World Cup in Brazil with $2.6 billion in profits after subtracting expenditures. Brazil, with 40 million of its citizens living in poverty, paid more than $11 billion to host the event.

Business trivia: Who or what is the biggest owner of media in the world? Chances are the Chinese government wasn’t the first thing that came to your mind, but that’s the correct answer. 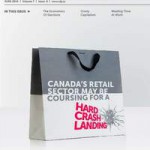 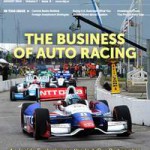