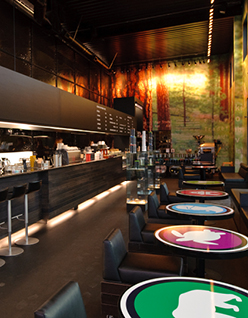 Kicks it up a notch

At the time of writing, Invermere, B.C., home to Kicking Horse Coffee, the No. 1 purveyor of organic fair trade coffee in the country, was blanketed in two feet of fresh snow. Specifically, the Rocky Mountains surrounding the area is blanketed, causing visitors and locals alike to strap on their skis and head to the hills. For the drive up, and afterwards in the ski chalet, warm cups of Kicking Horse Coffee are filled and enjoyed by those who know their coffee.

Kicking Horse Coffee has been a mainstay of Invermere, B.C., since the company started in 1996. Not only is it the base for the 90,000 square foot production facility, it is home to the company’s flagship (and only) Kicking Horse Café, where fans of the brew can get a close up look at the operation that has married both ethical trade and enviable business success.

By now consumers are well aware of the benefits of fair trade—fair labour conditions, direct trade, democratic and transparent organizations and community development—and organic products. Where customers may have originally sought out Kicking Horse Coffee for these qualities, they continued to do so for the taste, quality, and even the dash of B.C. that comes in the coffees, with names like Kicking Horse (after a famous and historic B.C. mountain pass and river), Kootenay Crossing, and Grizzly Claw.

Kicking Horse Coffee had an auspicious beginning, doubling its sales year after year. Today, Kicking Horse Coffee roasts over 4 million pounds of coffee annually from the Invermere facility, and enjoys revenue of about $25 million a year with predicted growth of 10 per cent annually; growth which reflects the consumer demand for premium organic coffee. The Organic Trade Association reports that between 2007 and 2008, organic coffee imports increased to 40,370 tonnes, a growth of 12 per cent and is continuing to rise. Most of these imports are also sold within the United States and Canada.

Like the beans, growth for Kicking Horse Coffee has been organic. “It has all been word of mouth,” says Rosenfeld. “Our quality, design, presence on the shelf and look has always gotten us noticed. We have gotten involved from the beginning with events that are representative of our brand—stuff like 5 Peaks trail running, mountain biking races, and the Nature Conservancy of Canada.”

Despite growth, the competition in the market has also increased since the days when Rosenfeld and Johnson began, as have the prices of wholesale raw green coffee beans, and Kicking Horse Coffee has made adjustments to continue its momentum in this environment, specifically by making the first price adjustment in 10 years so as to not jeopardize Kicking Horse Coffee standards. “From our end, this means being very fiscally responsible, efficient, keeping our cost down, and being diligent,” says Rosenfeld. “But we were not going to compromise on the quality of beans we purchase or anything we do in our process.”

With more than 15 years under its belt, Kicking Horse Coffee has proven that Rosenfeld and Johnson can sniff out a good business model as well as a good coffee bean. Pioneers in the organic fair trade coffee business, Kicking Horse Coffee has forged a path and been the leader ever since. “We put all our energy into and have kept up on quality, and our belief is that everybody should be drinking good coffee, regardless of whether or not it is organic and fair trade; it’s our dream to have everybody drinking organic fair trade and not even have to know it.”