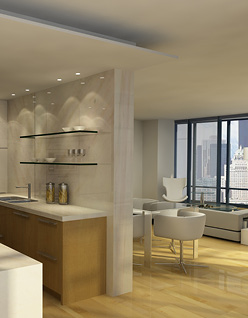 Icon in the sky

In a cityscape lined with high-rise condominiums, it takes a particularly spectacular building to truly stand out. The L Tower Condominiums, however, is on its way to being an iconic sight, right in the heart of downtown Toronto. Designed by architect Daniel Libeskind, the project is anticipated to be nothing less than spectacular. This month, The Canadian Business Journal speaks to Sam Criagnano, a principal at Cityzen Development Group, the building company responsible for the project, about progress thus far, and some of the buzz it has created.

The luxury condo unit is 57 storeys high and has 600 units. The bold, clean design skyrockets up in a dramatic, streamlined L shape. The location is highly sought, and sits close to the waterfront of downtown Toronto right on Yonge and Front. Situated at the fringe of the financial district and St.  Lawrence Market, it obviously benefits from all the amenities in the neighbourhood, including being just steps away from the ferry terminal.

“L Tower is basically tied to the renovations associated with the Hummingbird Centre,” Craignano explains. “Effectively, the city decided that they would sell a parcel of land in front of the centre in order to pay for the renovations—so that is the concept.”

The city identified a need for money, and accomplished this through the sale of some of their developments on that land. Cityzen Development Group acquired those development rights from the Sony Centre and has since “gone through a somewhat normal development process,” Craignano notes.

Normal, however, is perhaps quite an understatement. The luxury condo has a significant name attached to it—famous architect Daniel Libeskind as the project designer, who paired with a local firm. Libeskind has no doubt brought some recognition to the project, but he comes at a hefty cost. The cost, however, is one that Craignano easily justifies.

The importance of great design

“I’m a big believer in great design and ultimately I think great design sells. There has been hesitation to hire these ‘starchitects’ as they are labelled,” says Craignano, who notes that the demand seems to be there. “We’ve presold most units and gone to market. Out of 600 units, we’ve got about 20 units left to sell, so it is virtually sold out,” he notes with pride. “We’re now at the 11th floor in terms of construction and we’re 24 months away from completion.”

The costs to build such a high-end unit also keep many builders away. But again Criagnano stresses the benefits. “Yes, the cost to create with them is higher because they are more complex to build and materials are higher quality so there is a premium to construct, but I always believed that the market would pay for that and that there is a place for it. I’ve also always believed that you can catch a premium in the marketplace if you have a great design with great quality finishes.”

The philosophy is nothing new for Cityzen Builders, who heard the same sentiment when they built the Absolute Towers, iconic glass high-rise buildings in the heart of commercial Mississauga. “We embarked on that project and we heard the same negative comments and the naysayers asking how we can afford to build this, saying we will never get the money in the marketplace, but we proved them wrong because we did get that premium in the marketplace. Yes, it was more money to build but not only did we make up that difference but we sold at a rapid rate so we got to construction a lot quicker than we would normally. The same principles apply here, it is a great design and the market took to it and we sold in short order.”

L-Tower Condos is of course concerned with green initiatives. “L-Tower is an elite building, so we’re trying to strive for that LEED certification.  It has been designed to achieve elite status and we’re hoping to get LEED certified Silver, and it has been designed from Day 1 for that. It’s no longer a question of whether or not we’re going to have LEED status; it is more of a question of what level of LEED status we’re going to achieve. One of the problems of course is that with an all glass building it makes it that much more difficult to achieve. As technology improves with the window systems I think it will make it that much easier.”

The project is an exciting one that the entirety of Toronto will be watching, particularly as the next steps unfold. “Concrete form work is being undertaken now and probably within a month or two we’ll see cladding system installed, as well as all the conduits for mechanical and electrical.” The truly exciting development we will watch, however, is the superficial layer. As Toronto’s next icon begins to take form, the city anxiously awaits.