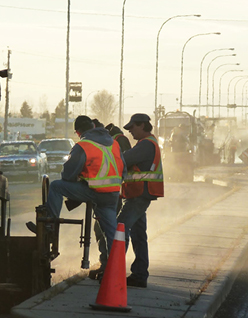 Lacombe, Alta.-based Lahrmann Construction is the expert when it comes to highway paving.

Ideally based and operating from Central Alberta, Lahrmann Construction is situated for plenty of work within the province.

Today, with more than 30 years of experience at its disposal, Lahrmann Construction continues its objective of taking advantage of an underserved Alberta market. As such, the company has built its market niche, always striving to meet the construction demands of the Government of Alberta, with various highway and construction improvement rojects across the province. It’s something that the company has continued since its establishment in Alberta in 1978, when the German-owned Lahrmann Construction was riginally attracted to the work opportunities and foreign investment within the province.

Extension into Alberta, and Canada as a whole, saw Lahrmann Construction combine company vision with local expertise. It is no surprise that success has followed. Over he years, the company has established its role and has worked to focus its capacity on being the service specialists for Alberta Transportation and Government of Alberta aving projects.

This commitment to Government of Alberta projects was all the more evident during the economic downturn, as the provincial government backed its infrastructure works inancially, resulting in the perfect storm for Lahrmann Construction.

The construction sector was one of the most damaged in this time of economic uncertainty, but fortunately for Lahrmann Construction, the company was “behind the ave” of the recession. In fact, according to Dwayne Berlando, General Manager of Lahrmann Construction, 2008 marked one of the best years in company history, setting ecord profits, while the following fiscal year also proved to be successful.

“Things were going so well during the boom and people moved into our market to take advantage of capacity issues and good pricing,” Berlando commented.

“The recession ventually caused cutback in volumes to the stagnant capacity, saturating the market and making margins more competitive.”
However, Lahrmann Construction did see this recessionary evidence in 2010, which was a different story for the company”, as it witnesses a major dip in its business. And while 2010 was not a great year, 2011 did prove to show a moderate improvement.

“The recession has put us from being quite profitable to back to where we are in maintenance mode,” Berlando said. “We’re able to spend still on equipment, maintaining our fleet, our wages our competitive, and as long as we’re able to pick up the volume of work at the prices that are out there today, we will survive.”

Moving forward, Lahrmann Construction continues to invest in its exciting future, keeping up with the best of equipment, a new facility, and continuously revising its overall business strategy to further complement its work in the field.

Berlando summarized, “We’re looking to stay strong in what we do, and that the Government of Alberta budget allows us to keep our market share and to keep going.”

Lahrmann Construction has emerged as the industry expert in highway paving by offering a quality, reliable, and affordable service. Managing all facets of its construction process, Lahrmann Construction is also able to work quickly because of its on-site worker locations, creating a solid standing and competitive advantage for the company.

Berlando calculates that with more than 30,000 kilometres of asphalt in Alberta, which typically lasts 20 years, there is about 1,500 kilometres of roadway in need of rehabilitation and overlaying work annually. In fact, presently, there is a backlog of work in Alberta, clearly good news for Lahrmann Construction.

By focusing on what it does best, Lahrmann Construction understands its market niche and why it has been successful over the company’s 30-plus year history.

The message from its German-based ownership remains the same as well, that as long as the company continues to be profitable and provide a good return on investment, such investment will only continue well into the future.