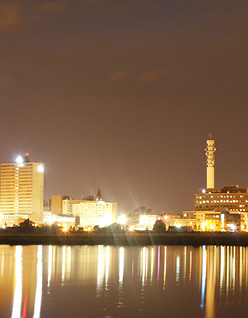 Like any major city, the City of Moncton’s local economy and future prosperity are closely tied. But what’s different about Moncton is its feel: the local townspeople are renowned for their friendly, can-do attitude, noted by the city’s recognition as Canada’s most honest, most polite, and most ‘Canadian’ city.
Moncton’s reputation is a community that gets things done, successfully drawing the business world to the area.

Moncton is home to three well-known trucking companies, a sign that its transportation sector is still strong. Meanwhile, the Greater Moncton International Airport is thriving, and the rail industry has begun to make a comeback. Accordingly, a $100 million contract has been secured with the federal government to refurbish VIA Rail passenger cars.

The can-do, hardworking attitude is representative of Moncton. Statistically, Moncton has traditionally held a lower average unemployment rate than Canada as a whole. That’s evident today, as Moncton boasts a meager six per cent jobless rate, which is lower than the Canadian national average (about 7.3 per cent, according to September 2011 figures).

The local bilingual population attracts big business to Moncton. About 40 per cent of the community is fluent in both English and French, a figure reached by only three other Canadian cities (Ottawa and Sudbury, Ont., as well as Montreal). In 2002, Moncton officially became Canada’s first bilingual city. Thirty-seven business call centres for organizations like Exxon Mobil, Royal Bank of Canada, and the United Parcel Service call Moncton home as these companies are able to utilize the local workforce capable of communicating effectively in both of Canada’s official languages.

“The hardworking bilingual workforce in Moncton is a real asset that helps contribute to Moncton’s success and brings new business to Moncton as well,” beamed George LeBlanc, Mayor of the City of Moncton.

Aside from the fluent bilingual workforce, the diversified economy and quality of life of Moncton is a draw to the city. LeBlanc added, “We focus very much on quality of life issues and we recognize that in today’s growing economy more and more people are moving to an area where the quality of life is great. We have a very vibrant economy, arts, entertainment and recreational facilities here, and the cost of living is low.”

The cost of housing is affordable in Moncton, considered the lowest in Canada in terms of income. Moncton has been recognized as the best place in Canada to buy real estate and, when putting all these elements together, it makes Moncton a great place to live.

The job climate of Moncton is also very diverse, with figures showing that no more than about 10 per cent of the work force is dedicated to any one sector, meaning plenty of diversity and stability when economic fears strike, as occurred to the global economy beginning in late 2008.

“Here in Moncton, we were very fortunate as our economy stayed strong during the recession,” stated LeBlanc. “In fact, one of the local sayings was, ‘Let’s hope the recession is over before it gets here.’”

The Greater Moncton Area represents the sixth-fastest growing economy in all of Canada, and the fastest growth east of Toronto. The area has scathed the effects of the recession, as it did twice previously in the last few decades. In the 1980s, three major local employers left the Moncton area, a significant blow to the local economy and workforce. Moncton could have folded, but given the perseverance of the community, that was not an option. Where Moncton could have withered on the vine, the exact opposite occurred.

“Having lost its biggest employers, the local business community and local government decided we were the only ones to help ourselves to turn this around,” LeBlanc explained. “From that, Moncton has become the economic powerhouse of New Brunswick.”

According to LeBlanc, since the 1990s, Moncton has created 40 per cent of new employment in New Brunswick. In righting its economic stance and becoming a very prosperous community, Moncton has reinvented itself, an achievement that is best known as the ‘Moncton Miracle’.

Moncton is a big draw and has a reputation for “punching above its weight class”, marketing the community as an entertainment and recreational hub. Moncton is vibrant and often draws big events for a community of its size. Musical hits like U2, ACDC, and The Rolling Stones have recently performed in Moncton.

Additionally, for the second year running, Moncton will host a Canadian Football League neutral-site game, between the Hamilton Tiger-Cats and Calgary Stampeders. Last year’s match, the Toronto Argonauts vs. the Edmonton Eskimos, was hosted at the Université de Moncton’s Moncton Stadium, and was played before a capacity crowd of 20,000-plus spectators.

LeBlanc attributes the successful turnout of these events to Moncton’s ideal, centralized location, with many travelling into Moncton from surrounding areas. Moncton is an attractive draw for both social and business needs. You can live, work, and play in Moncton.

Focusing on a vision for its community, the city aims for the best in prosperity and quality of life. As such, Moncton builds on its strengths and attempts to broaden its economy, a move that could ultimately attract more citizens. The community has cemented its reputation as a host of world class events, sports and recreation, and arts and culture.

“The prosperity of the community, the quality of life, these are all things that attract people and business.

“Moncton is a place where people want to be and want to live. We are consistently recognized by others as the place to be,” LeBlanc summarized. “Those are just recognitions by organizations, but I like to think in terms of people. And one of the things you will hear most often is that the people here are friendly…people move here and just love it here. Moncton is a great place to be, come and visit, and then stay here.”