“This Transaction will consolidate the highly prospective Pastos Grandes basin, and creates an exciting opportunity for Lithium Americas, a Canadian incorporated and headquartered company, to add incremental growth in one of the most important lithium producing regions in the world,” said Jonathan Evans, President and CEO of Lithium Americas. “The significant synergies between our two projects and a better understanding of the basin will enable us to advance development planning and maximize our growth pipeline in Argentina. The timing of the Transaction aligns with the Company’s previously announced plan to separate into two public companies in 2023, with significant project development activities expected at both businesses early next year.”

“We are very excited to enter into this transaction with Lithium Americas,” said Will Randall, President and CEO of Arena. “The Transaction allows Arena Shareholders to realize a meaningful and immediate premium and represents a unique opportunity to participate in the development of a larger, consolidated project as we work with the Lithium Americas team to advance the Pastos Grandes basin. In addition, this Transaction offers Arena Shareholders exposure to the world-class, near-term producing Caucharí-Olaroz project and the Thacker Pass advanced development project.” 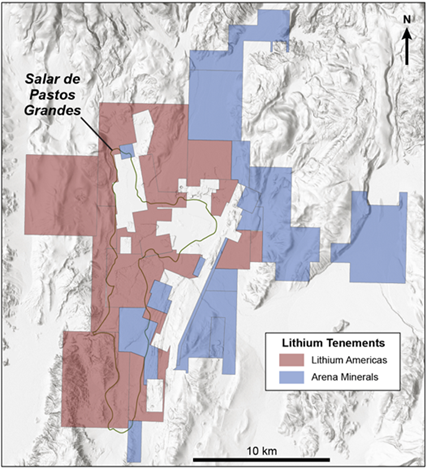 RECOMMENDATION OF ARENA BOARD OF DIRECTORS

Arena appointed a special committee of independent directors (the “Special Committee”) to consider and make a recommendation to the board of directors of Arena (the “Arena Board”) with respect to the Transaction. After consultation with its financial and legal advisors, and on the unanimous recommendation of the Special Committee, the Arena Board (with Ignacio Celorrio and Xiaofeng Lo abstaining) unanimously determined that the Transaction is in the best interests of Arena, and approved the Arrangement Agreement. Accordingly, the Arena Board recommendation that Arena Shareholders, option holders and warrant holders (collectively, the “Arena Securityholders”) vote in favour of the Transaction (the “Board Recommendation”). The Board Recommendation is made to all Arena Securityholders excluding Lithium Americas and Ganfeng Lithium (as defined herein).

The Special Committee received a fairness opinion from Stifel GMP., which was retained on a fixed-fee independent fairness opinion basis, which states that as of the date of such opinion and based upon and subject to the assumptions, limitations and qualifications set forth therein, the consideration to be received by Arena Securityholders pursuant to the Transaction is fair, from a financial point of view, to the Arena Securityholders (other than Lithium Americas and GFL International Co. Ltd. (as defined herein)).

The Transaction will be effected by way of a court-approved plan of arrangement under the Business Corporations Act (Ontario) (the “Arrangement”) and will be subject to the approval of: (i) 66 2/3% of votes cast by Arena Shareholders; (ii) 66 2/3% of votes cast by Arena Securityholders, voting together as a single class; and (iii) a simple majority of the votes cast by Arena Shareholders excluding for this purpose the votes held by any person required under Multilateral Instrument 61-101 – Protection of Minority Security Holders in Special Transactions, at a special meeting of Arena Securityholders expected to be held in Q1 2023 (the “Meeting”). In addition to Arena Securityholder approval, the Transaction is also subject to the receipt of certain regulatory and court approvals, including the approvals of the TSX, NYSE and the TSX Venture Exchange (“TSX-V”), any required approval under the Investment Canada Act, and other closing conditions customary in transactions of this nature.

The Transaction provides for, among other things, customary Arena Board support and non-solicitation covenants, with a “fiduciary out” that would allow Arena to accept a superior proposal, subject to a “right to match” period in favour of Lithium Americas. The Arrangement Agreement also provides for, among other matters, (i) a termination fee of US$9.1 million payable by Arena to Lithium Americas in certain specified circumstances, and (ii) a reverse termination fee of US$9.1 million payable by Lithium Americas to Arena in certain other specified circumstances.

All directors and senior officers of Arena have entered into support and voting agreements pursuant to which they have agreed to vote their Arena securities in favour of the Transaction.

Pursuant to the Arrangement Agreement, unless otherwise excluded, all outstanding Arena warrants (“Arena Warrants”) and stock options, which remain unexercised at the effective time of the Transaction, will be deemed to be exercised on a “cashless exercise” basis under the arrangement for Arena Shares, which will be exchanged for LAC Shares at the Exchange Ratio.

Ganfeng Lithium Co. Ltd., GFL International Co. Ltd. and their affiliates (collectively “Ganfeng”), which collectively owns approximately 16% of the outstanding Arena Shares and Arena Warrants that if exercised would represent a further 6% ownership of Arena, has entered into a support and disposition agreement committing to use commercially reasonable efforts to dispose of all of its securities of Arena (including exercising its Arena Warrants and disposing of the Arena Shares issuable thereunder) prior to closing of the Transaction. Further, the Arrangement Agreement provides that in the event that such securities held by Ganfeng are not disposed prior to closing of the Transaction, Lithium Americas will acquire such securities for cash (at a set discount to the value of the share Consideration at closing) rather than issue new shares of the Company as part of the Transaction subject to a maximum cash payment of C$75 million.

Subject to certain conditions, including the Parties obtaining the requisite regulatory approvals, the Transaction is expected to close by Q3 2023.

Upon closing of the Transaction, the Arena Shares are expected to be concurrently delisted from the TSX-V. The delisting is conditional upon TSX-V approval.

This press release does not constitute an offer to sell, or the solicitation of an offer to buy, any securities.

Lithium Americas is focused on advancing lithium projects in Argentina and the United States to production. In Argentina, Caucharí-Olaroz is advancing towards first production and Pastos Grandes represents regional growth. In the United States, Thacker Pass has received its Record of Decision and is advancing towards construction. The Company trades on both the TSX and on the NYSE, under the ticker symbol “LAC”.

Arena owns 65% of the Sal de la Puna Project covering approximately 14,000 hectares of the Pastos Grandes basin located in Salta, Argentina. Arena trades on the TSX-V under the ticker symbol “AN”.

Such statements represent the Lithium Americas’ and/or Arena’s (collectively, the “Parties” and individually, a “Party”) current views with respect to future events and are necessarily based upon a number of assumptions and estimates that, while considered reasonable by each Party, are inherently subject to significant business, economic, competitive, political and social risks, contingencies and uncertainties. Risks and uncertainties include, but are not limited to the following: ability of the Parties to complete the Transaction, the timing of any completion and the terms and conditions upon which the Transaction is completed; ability to satisfy or waive all conditions to closing the Transaction as set out in the Arrangement Agreement; Arena Securityholders approving the Transaction; the ability of the consolidated entity to realize the benefits anticipated from the Transaction and the timing to realize such benefits; unanticipated changes in market price for LAC Shares; changes to the applicable Party’s current and future business plans and the strategic alternatives available thereto; growth prospects and outlook of Lithium Americas’ business, including commencing commercial production at the Cauchari-Olaroz project; treatment of the transaction under applicable anti-trust laws and the Investment Canada Act; regulatory determinations and delays; any impacts of COVID-19 on the business of the consolidated entity and the ability to advance the Pastos Grandes project; stock market conditions generally; demand, supply and pricing for lithium; and general economic and political conditions in Canada, Argentina and other jurisdictions where the applicable Party conducts business.

Additional risks, assumptions and other factors upon which forward-looking information is based, as it pertains to Lithium Americas and its business, are set out in its latest management’s discussion and analysis and its most recent annual information form, and with respect to Arena, in its latest management’s discussion and analysis, copies of which are available under Lithium Americas’ profile and Arena’s profile on SEDAR at www.sedar.com.