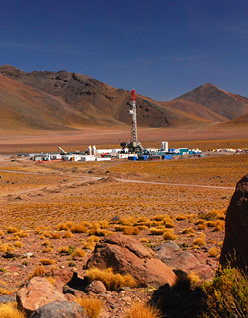 As anyone with petroleum, geothermal and mining project exposure in Latin America’s burgeoning industries may attest to, there aren’t many multidisciplinary drilling and workover services groups capable of offering top technology, international standards of excellence and close, customer-fuelled growth across the board. Between navigating high altitudes and jungle terrain, flexible service contract options and consistently delivering international standard drilling, engineering and consulting services, few outfits have maintained the growth, performance and lasting relationships of the well-oiled machine that is Estrella International Energy Services Ltd. (TSX-V: EEN.V).

Estrella has successfully executed its targeted 50 per cent year-on-year medium to long-term growth strategy—even keeping all of its rig fleet utilized circa 2008-2009 when its local markets dived under the economic downturn—and become a go-to multinational services provider while many of the majors rush for Brazil’s booming offshore oil landscape. In the words of Warren Levy, chairman and chief executive, the Buenos Aires-headquartered company is in the midst of what is clearly a huge phase of growth—not least after finalising the 100 per cent acquisitions of Colombian oilfield service companies STS, Petroland and Zigma, likely to propel Estrella’s annual revenue to US$100 million.

“We finished last year with $33 million in revenue and when we complete our acquisitions in Colombia we’ll be looking at triple that next year. It presents some growing pains of course, but we’re heading in the right direction and we’re seeing good solidification of the steps we’ve taken in the past few months; the re-growth in Peru and entering into Bolivia, for example,” Levy reflects.

“We’re getting really good feedback from the customers and, importantly, from the communities as well.”

In for the long haul

Founded tentatively in 2001 and focused initially in Argentina, Estrella acted quickly to establish a competitive regional presence across the countries it now operates in. Levy says that it was a changeable time for Latin America as post-Argentine financial crisis little investment was taking place, but Estrella has never relied on the commodity price cycle when it comes to finding a firm footing in markets and electing where to grow its service offering.

“Initially we were self-financed, focusing on work we could finance out of our own pockets. We were very familiar with the drilling and workover and completion businesses, so we started with drilling before adding consulting and engineering work—basically taking advantage of the team strength and doing a lot of the work ourselves,” he says.

“We realised a couple of things quite quickly. One, that Argentina is itself a rather challenging market because of its geographic extent. Two, that there’s a real challenge when you’re looking at any individual service in Latin America, in that there’s not enough density of activity to make one single service successful.”

These realisations, combined with an acute understanding of the different economic and geopolitical risks in the countries in question, enabled Estrella to cultivate its highly beneficial, strong geographic presence. Its foray into Chile serves as an ideal example. In 2005, after eight months operating the business in Argentina, the team entered the country, taking advantage of the fact that the state oil company was heading back to drilling after a near decade-long hiatus; an early move into its multinational role.

“We always identified the opportunity and company desire to grow continually by region up through the Andes and we see a lot of the same market dynamics in the countries we’re currently operating in. The geographic presence was an objective to take advantage of Latin America’s relative stability,” Levy explains.

“When you look at the regionalised rig count and factor in economically and politically motivated activities, you get a much more stable rig count on average than anywhere else in the world. You only get to take advantage of that stability if you have a regional presence.”

Estrella’s success during the economic downturn in 2008-2009, which resulted in a 50 per cent rig count drop globally versus approximately six per cent in reduction for Latin America, is a prime example of the stability Levy speaks of. Having already been established at local levels across the countries serviced, Estrella maintained its targeted growth throughout that difficult period, building a solid record in maintaining revenue and relationships now braced to support its impending ascent on both fronts.

While the company’s recent Colombian acquisitions may have grabbed column inches throughout December 2010-to-October 2011, Levy stresses that Estrella also intends to plough ahead with organic expansion. In example, the group’s decision to diversify its services offering has been largely customer-driven, as are many of its other commercial moves.

“As a team we have a lot of experience in operating rig equipment and in 2007 we had customers coming to us and asking if we’d bring more modern rigs into the regions to operate on term contracts for them,” Levy recalls.

“South America has historically been a dumping ground for old equipment—when it’s no longer of interest in North America it often gets shipped down to South America, and as a result you have a market where price points are relatively low, but efficiency is very low.”

The first customers to award rig contracts that year were PetroAndina Resources Inc. (TSX:PAR) and later Occidental Petroleum Corporation (NYSE:OXY). Estrella financed and fabricated four rigs and shipped them out to Argentina in 2008. Today the team continues to identify and tackle operational challenges in line with customer demand. Currently, Levy says, there are two particular macro trends which have taken shape, beginning with non-conventional drilling development such as geothermal project requirements in Chile and Bolivia (also taking shape at earlier stages in Peru and Argentina).

“We’re seeing growth of the solution mining industry in South America. The first project is underway in Argentina and we can see three or four other projects popping up. There’s also non-conventional gas and oil, largely led by shale gas and shale oil discoveries in Argentina,” he says.

“Those projects all require a level of sophistication, not only on the rigs themselves but also in the operational management because typically you’re talking about pad drilling and much more advanced directional developments than have historically been the norm in South America.”

The second macro trend is an increased exposure to remote projects. Although well-developed conventional basins continue to be attractive, customers are increasingly looking to new frontiers. Estrella has provided services accordingly, including high altitude drilling in Chile, in remote outer reaches of Colombia which wouldn’t have been on the radar given security fears a decade ago, jungle terrain in Brazil and early-stage opportunities in Peru and Ecuador.

“If you’re looking at going to 4,000-5,000 metres in Chile, a company will need technical sophistication in its drilling; there’s a lot of risk. One thing which benefits Estrella, and has encumbered the market, is the huge impact Brazil offshore has had on the region as a whole,” Levy explains.

“The major service companies are focused on that because it’s a huge market compared to anything else that’s ever existed in South America, and a lot of the oil companies feel like they’re not getting the best people for the rest of the projects in the continent—they feel like they’re now a second priority for the major multinationals.”

In Estrella customers find high quality people, a strongly customer-focused organization, with the in-house technical knowledge to be able to operate their projects, and close business countenance as standard—Levy and his directorial team are only a phone call away. In moving with the macro trends identified, the team has also captured market attention when it comes to the quality of its fleet and associated kit.

A zeal for technology & innovation

By considering factors such as the uptake (perhaps exodus) of major service providers towards the Brazilian offshore, South America’s history as a destination of mechanical hand-me-downs and the problems in traversing its various terrains, Estrella’s niche becomes clear: For a services provider to do well in South America it needs to be diverse, immediate, experienced, unperturbed by current offshore trends and in possession of cutting edge equipment. Levy explains that this requires finding critical business tenets, which in the case of Estrella’s rig fleet are both transport and automation-related. Whether it is managing long distances in Argentina, stretches of jungle in Peru, or unchartered areas home to security fears in Colombia, getting around can be difficult.

“As such portability of the rigs is a crucial factor, one which you can’t fix if you have a rig designed in an older style that is difficult to move,” Levy says.

“We’re also very committed to a high degree of automation on our rigs. We believe it brings operational efficiencies and two unique things in particular: Safety and allowing you to attract and retain a higher quality of staff. Skilled rig workers would much rather be manning a computer and optimising something than throwing heavy equipment around manually.”

When it comes to corporate acquisition or buying rigs that exist in the North American market, any machinery must possess the portability Levy highlights. The automation element is then either added in, or improved upon, to bring equipment up to the company’s standards. This same care and attention is applied throughout Estrella’s machinery, and the team’s work in Chile serves as a fine example of both the different activities that can encompass and the leading role its customers and communities play in decision-making.

Estrella’s measurable success and big plans stem from an inbuilt culture around valuing human input and impact at every juncture. This includes its role as a South American services provider, Levy says. Business is conducted in Spanish throughout its country-specific operations which involve locally sourced crew members and customer-led processes.

“We’re looking to make sure that as we grow, and we’re growing quickly, we need to do it in a sustainable manner,” he says.

“We’re here for the long haul.”

Estrella’s roots as a South American entity place it in good stead as it looks to the future. From expanding on its consulting and engineering divisions as increasing drivers behind its rig and service businesses, to fulfilling customer demand for integrated project services and/or bundled services offerings, it is a stable, highly experienced and overwhelmingly committed company made up of like-minded industry experts who recognise South America for its potential in the years to come, as well as its attractions today. No challenges are seen as closing market doors; they are accepted and interwoven into how the business approaches regions respectfully with proven success. Levy says that the team is in South America for the long haul, and it looks like Estrella will remain the clear choice for anyone in need of a world-class oilfield and energy project services provider for many years to come.