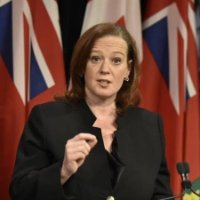 CBJ — Ontario Progressive Conservative MPP Lisa MacLeod dropped a bombshell on Friday morning when she told a gathering of reporters that she had heard about similar accounts from women about Patrick Brown and had forwarded the information on to high-ranking party officials. The timeline was apparently towards the end of last year.

“There were lots of things that were percolating that a lot of people heard,” she said. “People would tell me things so I would float it up the flagpole to the central campaign,” said MacLeod. “Certainly when I heard issues about women I would bring those forward.”

According to MacLeod, the response she received back from the officials was that the allegations against Brown were unfounded.

The 39-year-old Brown resigned as leader of the party following a conference call with his fellow party members late Wednesday night. As of now, two women have come forward claiming sexual misconduct against him. He has denied the allegations as being completely false, and has vowed to remain the MPP for Barrie. None of the allegations against him have been proven in court.