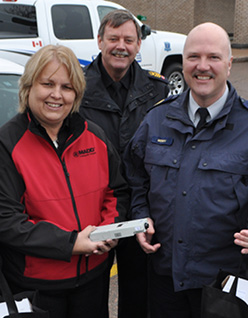 The facts are sobering: every day in Canada there are four deaths and 174 injuries from auto crashes involving impaired drivers. And by their very nature, they are 100 per cent preventable.

Today, MADD Canada has more than 100 chapters and community leaders and 7,500 volunteers. Despite these efforts, and the estimated 35,000 deaths prevented as a result of work done by MADD Canada, impaired driving remains the leading criminal cause of death in Canada. And so MADD Canada continues to work on grassroots, provincial and federal levels to stop impaired driving and support its victims.

Some of that work done at any given time throughout the school year sees four teams travel the country presenting an educational campaign aimed at students from Grades 7 to 12, typically soon-to-be new drivers.

Andy Murie has been CEO of MADD Canada for the past 15 years. “This is the group we are targeting, brand new drivers,” Murie says. “That is the generation we want to change forever. If we feel we can change their behaviours and attitudes at 16 or 17 they will carry on those learned practises right on through adulthood.”

Non-drivers can also participate in the fight against impaired driving. Campaign 911, a nationwide campaign aimed at encouraging and empowering the public to call 911 if they suspect a driver is impaired. Campaign 911 has been proven to help take impaired drivers off the road, and provides support for enforcement agencies. As the summer approaches, MADD Canada is taking the success of the campaign from the roadways to the water, with anti-boating and driving messages at marinas and docks across Canada.

“You wouldn’t drink in your car, so don’t do it in your boat,” Murie says. “It’s a better use of our resources if we engage the general community.”

MADD Canada’s work with law enforcement reaches provincial and federal levels as well, specifically with a new push to get the federal government to implement random breath testing (RBT) “and finally bring one of the most effective anti-impaired driving measures to Canada.”

RBT is an effective tool for deterring impaired driving and reducing deaths and injuries, one that has been adopted and proven in most democratic countries in the world outside of Canada and the United States.

According to MADD Canada, “Predicting the exact impact of random breath testing in Canada is challenging. It is unlikely that Canada will experience crash reductions in the 35 per cent range as seen in Queensland, Australia. It is reasonable to assume, however, that Canada would see reductions in line with those in Ireland because the two countries have similar systems of sobriety checkpoints and reasonable suspicion requirements. Ireland experienced a 19 per cent reduction in crash fatalities in the first year of random breath testing.”

“RBT is a preventative tool because when people realize that the potential of being testing is increased, they change their behaviours,” adds Murie. “Studies have shown 50 per cent of impaired people go through checks undetected. [Our current system allows] police about 10 seconds to assess whether they can make a demand, and they are going to miss people. You wouldn’t conduct any other crime investigation that way, so why do we do it for impaired driving?”

Change at the federal level does not happen overnight. MADD Canada petitioned the Justice Minister to adopt RBT for Canada in 2009, with little traction since then. The organization is likewise working on changing current laws which pose obstacles for police and health professionals to get time-sensitive Blood Alcohol Content data in a hospital, and is advocating for changes in the Criminal Code to address this issue.

MADD Canada believes “No single law, awareness campaign, or education program alone will stop impaired driving. What is needed is a combination of laws, enforcement, education and awareness which work together to take impaired drivers off the roads, deter others from getting behind the wheel impaired, and effectively change attitudes and behaviours.”

Says Murie, “The progress is there, but there is still a lot of work to be done yet.”