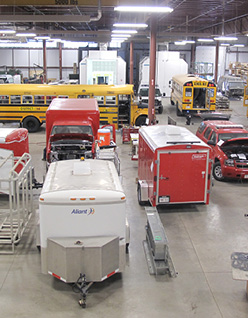 Putting the world in custom-made vehicles

It took 20 years for Malley Industries to become an overnight success story.

Based in the heart of Atlantic Canada, Malley Industries has emerged as a leader in the Canadian custom vehicle modification industry. And like many organizations, the success of Malley Industries roots to the company’s deep family ties.

Terry Malley, President since 2000, founded the company with his parents in 1979, with the intention of producing quality manufactured products related to niche opportunities in the automotive industry. At that time, Malley was studying Business Administration at the University of New Brunswick, so his initial involvement was working on a part-time basis in sales.

The entrepreneurial spirit of the company’s founders continues today.

Malley Industries learned early that diversity is critical not only to its sustainability, but also for its growth, particularly in the lower population density region of Atlantic Canada. Customer by customer, Malley Industries manufactured conversions specific to the customers’ particular requirements.

Originally focusing on custom vehicles and truck caps and campers, Malley Industries shifted toward more technically-advanced conversions beginning with ambulances, which has become the company’s flagship product. In addition to the long-time supply of ambulances for the Province of New Brunswick, Malley Industries has provided ambulances to various municipalities, mining and other industrial operations, and has shipped ambulances to Mexico, Saint Kitts, and Chile.

As the technical nature of Malley Industries’ work advanced and more structural modifications were required for the custom vehicles it produced, so did the requirement for quality-related certifications. The initial foray into the regulatory requirements for modifying vehicles was related to ambulance manufacture.

“We had a lot of homework to do, and at the same time, in order to produce vehicles that would ultimately be paid for or financed by government, we had to become very aware of certifications, requirements, and standards,” Malley said. “We recognized the importance of being ahead of the curve by ensuring that we were proactive, which brought our company to a different level.”

It was not long after getting involved in ambulance manufacturing that Malley Industries began to show an interest in manufacturing adaptive mobility vehicles to aid with the transportation of persons with disabilities. Starting with the installation of hand controls and other equipment, Malley Industries has advanced as the only company in Canada authorized to perform lowered floor modifications on several Ford platforms.

Similar to when Malley Industries entered the ambulance manufacturing industry, the adaptive mobility industry was also in its infancy. With customers and dealers throughout Canada and into the eastern U.S., this market has proved to be a growth area.

As the RV and van business was waning, the company eyed other opportunities in commercial unfitting. Whether for an individual contractor needing to organize tools and equipment, or providing major fleets with the commercial conversions suited to their industry needs, Malley Industries has the desire, expertise and creativity to exceed customer expectation.

What sets Malley Industries apart from most manufacturers is the ability to have very different types of work on its production floor at the same time. A benefit of this diversity in production helps the company avoid the peaks and valleys of demand—and ultimately provides more stable employment.

By 2007, the company had outgrown the third facility it had moved to and began planning for its next spurt. Relocating to a new facility three times the size and capacity was deemed critical to the planned forward growth. Malley Industries moved to its new, purpose-built facility in late 2010.

“When there was a downturn in the economy, our business was going flat out, we didn’t see a blip at all,” Malley said. “In early 2010, we experienced a delayed response to the economic crisis that had been felt elsewhere and the timing could not have been worse because we were well into the construction of our new plant.”

With determination, a forward-focused team and a steadfast belief in his vision for growth, Malley now says, “It’s been a challenging time, but we’re now trending in the right direction, with lots of projects in the hopper.”

Malley Industries will often seek several smaller projects rather than depending on the big-time “all-or-nothing” contract. Nevertheless, Malley Industries doesn’t shy away from larger projects, but the company is realistic in its pursuits.

“We try to manage our growth, setting realistic and achievable annual targets, trying to have a constant increase in a manageable way so that if we do not win a contract we are hoping for we have enough other things in the works that it’s not devastating,” Malley said.

In recent years, Malley Industries has also expanded into another business arm by investing in the manufacturing capability of plastic component production for the automotive industry, public transport, food service and aerospace sectors. With in-house design and engineering capabilities, this new business segment has provided another growth stream for the company.

“To achieve growth, you have to be diversified,” Malley summarized. “Our company is now divided into five units: ambulances as our flagship, adaptive mobility vehicles, specialized police and prisoner transportation vehicles, fleet up-fitting, and our plastics design and manufacture.”

About one-half of the Malley Industries’ sales reach is based in New Brunswick, while its new plastic products segment is primarily based in the United States.

The company also sees plenty of potential for plastics component manufacture outside the automotive sector.

“We have a little bit of a different approach to most companies on the East Coast in that when we first got involved with exporting, our focus was never on the United States as a target,” Malley explained. “We focused in other areas where we had fewer competitors, maybe smaller volumes, but collectively it would add up. To have such a large percentage of our plastics business emanating from the U.S. is something we had not expected.

“We have been expanding our sales force and our distribution networks across Canada for both mobility and commercial products,” Malley concluded. “Establishing a larger footprint across North America will help us achieve our vision for the future.”