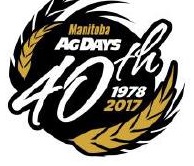 In the fall of 2015 Manitoba Ag Days announced the “Ag Days Gives Back” community giving program. 100% of the 50/50 funds raised at the show, which runs from January 17 until 19th at Brandon’s Keystone Centre, will go back to agriculture organizations and communities where exhibitors and patron’s live.

“We want to give back some of the show’s success to those exhibitors, patron’s and communities which contribute to the show’s success”. Stated General Manager Kristen Phillips. The application deadline for 2018 is November 15th, 2017.

U of M’s recipients will be announced at a later date.