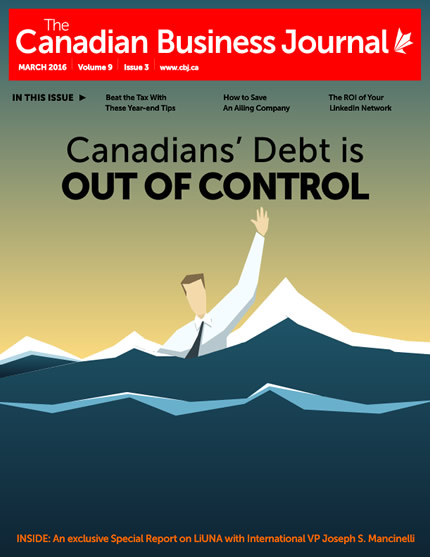 Canadians are swimming in debt like no time in the history of our country. What’s most incredible is that a relatively large number of individuals don’t seem to recognize they are hanging from a financial thread – or at least won’t outwardly admit it. When pushed to the wall with stifling debt the answer seems to be to take on more debt, with interest rates being so tempting. But there will be a day when the banks raise those rates, and when it happens, it’s going to get extremely ugly. We take a look at this topic in our cover feature.

The international oil glut is likely going to continue right on through 2016, which is bad news for oil producing provinces like Alberta, Saskatchewan and Newfoundland and Labrador. The International Energy Agency says oil supply is set to outpace demand this year, keeping a lid on any expected price increases. Global excess supply may reach 2 million barrels per day during the first quarter, and a further 1.5 million barrels a day in the second quarter.

ABCs of Business: Alphabet Inc. is now the world’s most valuable company, taking a bite out of Apple, which had been ranked No.1. Alphabet, which was not that long ago created and is the parent company of Google, saw its shares increase almost 2% recently, pushing its market capitalization to $534 billion. The online company had been inching closer to the iPhone maker in recent weeks as investors lost confidence in Apple’s smartphone business and wagered that Alphabet has a clearer path to growth. Apple had overtaken oil giant Exxon Mobil to become the world’s most valuable company in 2011. With oil dropping so precipitously low, bottled water companies will soon be worth as much as the oil companies.

Can Twitter CEO Jack Dorsey revitalize his stumbling company’s financial fortunes? Just recently four senior executives flew the coop for bluer skies. Twitter’s stock has fallen nearly 50% since Dorsey’s return last year and is now trading below its IPO price amid concern the company has failed to significantly boost its user base despite a quicker pace of product rollouts under Dorsey. A bigger problem is how to monetize the social media platform and maximize return on investment for shareholders. As of now, nobody seems to have an adequate solution.

Did you know? The founders of Twitter originally had other names in mind. Among them: “Twitch”, “Smssy”, and the somewhat disturbing “Friendstalker”.

And a thumbs-up to Leonardo DiCaprio, who finally won a long-overdue Best Actor Oscar at the Academy Awards. 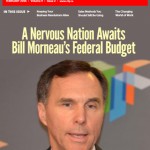 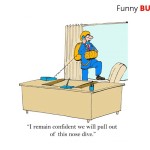